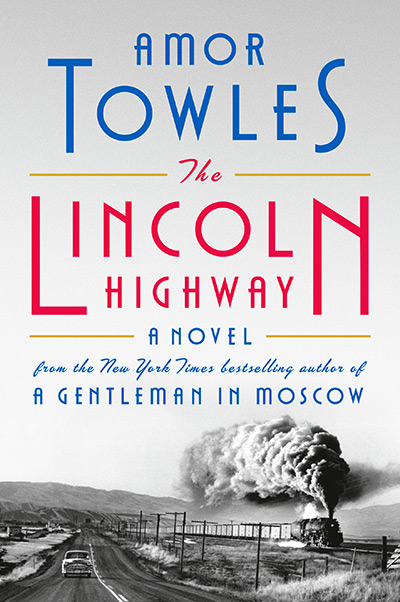 In Amor Towles’ incomparable A Gentleman in Moscow, Tennyson’s tale of Ulysses sounded a recurring note as the favorite poem of a man condemned to remain in a single building for the rest of his life. Towles’ latest novel, The Lincoln Highway, offers up a full-on odyssey in which the Trojans’ wine-dark sea is replaced by good old American macadam and the infinite promise of the open road.

As Towles notes at the beginning of Highway, his three books (the third being Rules of Civility) tell distinctly different tales, though by now we certainly know the voice and style of this consummate storyteller.

Here, the tale, set over 10 days in June of 1954, revolves around three 18-year-old boys — Emmett Watson, Duchess Hewitt, and Woolly Martin, whom the Fates have thrown together at a juvenile reformatory in Salina, Kansas — and Emmett’s 8-year-old brother, Billy.

Emmett and Billy hail from the tiny farming community of Morgen, Nebraska, where Emmett’s solid punch to a bully’s nose, together with “the ugly side of chance,” lead to the boy’s death and Emmett’s confinement. Emmett is released early when their father, Charlie, dies, and the bank forecloses on the farm.

Unfortunately for Emmett’s plan of a new start with Billy, Duchess and Woolly stow away in the trunk of the warden’s car, happy to make Emmett’s fresh start their own.

Billy’s plan, which he lays out to Emmett as a map of nine postcards sent by their fleeing mother back in 1946, is to retrace her route from their house along the Lincoln Highway all the way to San Francisco to find her. Duchess’ plan is to settle up accounts — both debts and collections — with several people and then liberate the cash equivalent of Woolly’s trust fund from a safe in the Martin family’s summer camp in the Adirondacks and split it three ways. Conflicting geography is the least of the incompatibilities in their various intentions.

For his part, Woolly is the innocent of all innocents, taking in the world with a childlike sense of wonder, which is accompanied by an innocent’s clarity of perception. He understands that, whether it was a boarding school or a boy’s prison, every day was certain to be “an every-day day,” which prepared well-heeled students and shoddy inmates alike for an entire existence of every-day days. Oppressed by these expectations for “the one-thousand-page version of one’s own life,” Woolly is instead searching for “a one-of-a-kind kind of day.”

In many ways, Charlie Watson was a similar innocent, having ditched the demands and expectations of wealth by stealing his bride away from their old-money Boston families and striking out to prove his mettle on the Great Plains. To their misfortune, he was not cut out to be a farmer, and his bride was not cut out to be a farmer’s wife. Much like Woolly, she finally realized “what joy could be if only she were willing to leave her daily life behind.”

In so doing, she also left behind a 10-year-old Emmett and an infant Billy. Emmett’s life lesson from that early abandonment and from watching his unwise, unlucky, debt-ridden father is to get as far away from farming as possible and to pay off debts or, more crucially, never to incur them in the first place. That includes dissuading his neighbor Sally from helping him and Billy in any way that leaves him beholden to her — though he is forced to ask for her help more than once. He doesn’t want to owe anyone anything.

Duchess, a loquacious charmer with the patter of a conman and a sharp-eyed view of human nature, has abandonment issues of his own. Still, he has managed to develop a sketchy but well-meaning personal code of ethics built on its own interior logic.

When he and Woolly drive off in Emmett’s Studebaker for New York — leaving Emmett and Billy to hitch to the city on freight trains — he is merely borrowing it. And when he begins to spend the money Charlie left for Emmett, he has every intention of paying it back. After all, he is the only one of the three actually innocent of the crime that sent him to Salina, having been framed by his dissolute father.

As with any good odyssey, this one is peopled with characters who flit through the story in cameos to move the plot, thwart progress, or add flavor. There is the wise, patient Sister Agnes; the malevolent Pastor John; an actual Ulysses separated from his wife and son and wandering the country; Emmett’s bunkmate from Salina, Townhouse; Professor Abacus Abernathe, whose book of adventurers Billy keeps close and reads aloud for any who will listen; Woolly’s suffering but loving sister Sarah (and her angry, entitled husband, whom Woolly thinks of as “Dennis,” quotes and all); and a large cast of others.

Arguably, that cast is a tad too large, and some of the stories range too far afield, but this is Amor Towles in an antic mood, and many of his readers will be willing to follow him wherever he leads. In this case, playing against type, especially for what is at heart a comic novel, he leads us to a morally ambiguous ending.

The four travelers indeed make their various ways to the remote Martin family “camp” — as only old money can call a huge, beautiful manor house on its own private lake — for the inevitable collision between Emmett and Duchess, with their conflicting plans, intentions, and codes of honor.

In a novel that wrestles with thorny questions of moral culpability — such as, if we mean no harm but cause harm nonetheless, how much does our intent weigh in the balance, and what punishment should we accrue? — The Lincoln Highway ends with another question: If we are unknowingly the author of another's misfortune, how is that debt recorded on our moral balance sheet? Towles leaves us to ponder.

Jennifer Bort Yacovissi’s debut novel, Up the Hill to Home, tells the story of four generations of a family in Washington, DC, from the Civil War to the Great Depression. Her short fiction has appeared in Gargoyle and Pen-in-Hand. Jenny reviews regularly for the Independent and serves as president of its board of directors. She has served as chair or program director of the Washington Writers Conference since 2017 and for several recent years was president of the Annapolis chapter of the Maryland Writers’ Association. Stop by Jenny’s website for a collection of her reviews and columns, and follow her on Twitter at @jbyacovissi.