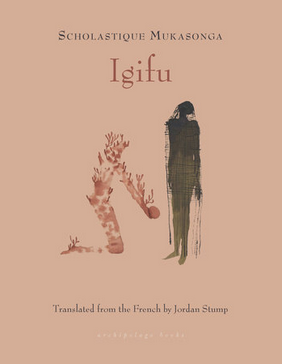 “Listen, Asumpta,” one of the characters in Igifu tells her friend. “We’re Tutsis, sorrow hangs over all of us, and it lands heaviest on the women.”

With these words, Scholastique Mukasonga captures the essence of Igifu, a collection of five heartrending stories about the ordeals the Tutsis suffered as a result of the Tutsi-Hutu conflict of the early 1990s.

A native of Rwanda, Mukasonga was forced by the violence to flee to Burundi and then to France, where she currently lives. During the brutal 1994 Tutsi genocide, 27 of her family members died. Drawing largely from personal experience, she paints a vivid picture of the consequences of violence for ordinary people.

“Igifu” means hunger, and hunger plagues the displaced Tutsis of Nyamata “like a cruel guardian angel.” It is a “heartless magician” who conjures up images of steaming beans or manioc balls, simple meals that the refugees cannot afford. Back home, they did not want for food, as they kept dairy cows, but the invaders killed their animals, and now the Tutsis must work for a pittance or accept charity.

In the first story of the collection, appropriately entitled “Igifu,” a child becomes so weak from hunger that she passes out. Her desperate parents put aside their pride and resort to begging the neighbors for sorghum to make a porridge for her.

“The Glorious Cow” describes with great tenderness the bond between the Tutsis and their animals. Each cow has a name and is treated with respect. Kalisa, the narrator, describes his charge almost as if she were a woman: “I admired her swaying walk, her long, perfectly curved horns, her big, dreamy eyes…she was my pride.”

Mukasonga depicts in detail the elaborate milking ceremony, the special jugs that are used, and the pasturing procedures. Although men do the herding and milking, women are in charge of the milk, and they feel great joy at providing nourishment for their children.

However, when the Tutsis are forced out of their villages, they lose not only their material possessions, but their way of life. The possibility that the Hutu invaders might have feasted on their cows fills them with dread, even after the violence is over.

The anonymous protagonist of “Fear” grew up listening to her mother’s constant admonitions: “Whenever you meet a soldier or a militiaman or a stranger, remember: he’s planning to kill you.” The children of Nyamata, where she lived as a child, learned to take extraordinary precautions walking to class, while her teacher constantly glanced out the window for signs of danger.

“You had to stay on your guard,” says the protagonist, for “any incident could be a prelude to the final massacre, every word spoken by a high-placed official could hide a coded call for murder.” Now an adult living in France, fear still haunts her. She cannot shake the dread she feels at the sound of an approaching footstep.

“The Curse of Beauty,” perhaps the most powerful story in the collection, paints a dismal picture of the lot of attractive Rwandan women. Helena, the breathtakingly gorgeous protagonist, is spoiled by her parents and even allowed to use expensive creams and lotions. When she reaches marriable age, her parents demand an exorbitant dowry beyond what the local Tutsi boys can afford, yet no Hutu can aspire to her hand without betraying his people. Her only option is to become the mistress of a rich and powerful man.

She first goes to work for a Belgian import-export firm, where the director, Monsieur van Kloopersdyck, becomes her paramour. After his departure from Africa, she falls into the hands of one unscrupulous man after another, each of lower position than the former, until finally, AIDS robs her of everything.

In “Grief,” the final and perhaps the most autographical story of Igifu, a young Rwandan woman living in France receives a letter containing a long list of her relatives who died in the genocide. So numb with grief that she cannot weep for her own dead, the woman attends the funerals of strangers, where she gives free rein to her sorrow.

Eventually, she returns to Rwanda to discover exactly where her relatives repose. As she makes the trek up the hill to the place she once lived, she feels a surge of pride that her father, a village elder, had tiled the family’s roof. But her house is now in shambles, and her guide warns her that her father’s bones are not there. They are somewhere she mustn’t see. When she finally discovers his resting place, it is more horrid than she could have imagined. Still, finding him helps relieve her of her despair.

Mukasonga’s superbly crafted stories leave the reader with a deep sense of desolation, thanks, in part, to her deft use of metaphor. Hunger is an “implacable enemy who lived deep inside us.” Fear is the Tutsis’ “true shadow, the shadow that never left them, that ignored the sun’s course through the sky, that clung to them even deep in the night.” Fear “walked with us on the road to school” and sat “with us…on the benches of the classroom.” “I’m like an egg,” one protagonist tells herself. “One jolt and I’ll break.”

Yet these stories are not devoid of joy and hope. The fortitude and perseverance of the Tutsi women; the bonds that unite neighbors, who put aside grudges and pull together in times of need; the beautiful milking rituals of the Tutsi farmers; the willingness of one woman to raise another’s child, should it be necessary — these particulars leave the reader with profound appreciation for the resilience and generosity of the Tutsi people.

With Igifu, Scholastique Mukasonga has written a wonderful and important book, one that will expose most Western readers to unexpected new worlds.

Bárbara Mujica, a professor emerita at Georgetown University, is a novelist, short-story writer, essayist, and scholar. Her novels include the international bestseller Frida, based on the relationship between Frida Kahlo and Diego Rivera, Sister Teresa, based on the life of Teresa of Ávila, and I Am Venus, which explores the identity of the model for Velázquez’s Rokeby Venus. Her collection of stories, Far from My Mother’s Home (Spanish edition: Lejos de la casa de mi madre), focuses on the immigrant experience. Collateral Damage, to be published next spring by the University of Virginia Press, is an edited collection of women’s war writing, and Imagining Iraq, also due out next spring from Living Springs Publishers, contains short stories told from the perspective of the mother of a veteran. Mujica has won several prizes for her short fiction, including the E.L. Doctorow International Fiction Competition, the Pangolin Prize, and the Theodore Christian Hoepfner Award for short fiction. Three of her stories and two of her novels have been winners in the Maryland Writers’ Association national competition. I Am Venus was a quarterfinalist in the 2020 ScreenCraft Cinematic Novel Competition. Her latest scholarly book is Religious Women and Epistolary Culture in the Carmelite Reform: The Disciples of Teresa de Ávila (Amsterdam University Press, 2020).