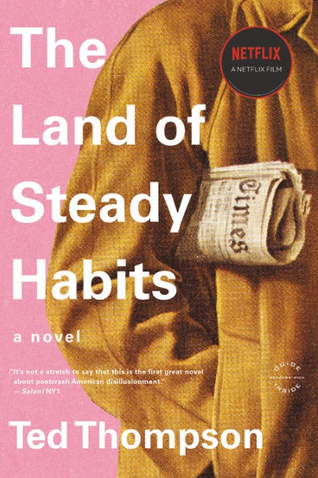 When we meet Anders Hill at the opening of Ted Thompson’s The Land of Steady Habits, he is angrily savoring his new freedom in late middle age. He has taken an early retirement from a successful career in finance, removed himself from his sexless marriage, and is gleefully contemplating an invitation to the Ashbys’ annual holiday party, which had “become a emblem of obligation to Anders, a reminder, at the end of his marriage, of the kind of man he’d become.”

The Ashbys – Mitchell and Sophie – are really his ex-wife Helene’s friends, and Anders finds himself “relieved to no longer have to show up only to be a disappointment to her friends.” Moments later, he sets down the invitation, puts on a clean shirt, and heads over to the party.

It’s a stupid decision, of course, but by no means the worst Anders will make in the weeks to follow (the novel mostly takes place in the month between Thanksgiving and Christmas.) At the party, Anders slips out to the back deck, where he discovers a clutch of young men clandestinely getting high. One of them is Charlie Ashby, the son of the hosts, who invites Anders to join them. After thoroughly sabotaging his brain chemistry, Anders spots Helene inside the house with her new boyfriend and heads back in to confront them.

All in all, Anders’ bid for a new life isn’t going very well. Set loose from the grind of work and family, he’s learning that there is a vast difference between freedom from and freedom to. For nearly a year, he has lived alone in a depressing apartment in town, where the highlight of his day is discovering he’s run out of cranberry juice. He has also realized that as a retiree he can’t afford to pay the mortgage on his house – the home he promised Helene during their divorce settlement, where she now lives with her boyfriend and Anders’ 30-something-year-old son, who has refused to speak to him since the separation. He’s beginning to regret his eagerness to abandon both his career and his marriage.

His only friend, fellow divorced retiree Larry, decides to cheer Anders up by taking him out on an ill-considered bender at the local college bar. En route to their destination, Larry takes a detour to the train station parking lot. Here they sit in silence, watching the depressing spectacle of the silver cars “spilling dark coated people onto the platform like gutted fish.” After the SUVs and sedans have all departed, Larry looks at Anders pointedly. “Do you miss that?” he says.

The sentiments and the milieu are of course deeply familiar – nearly mythological – to American readers. We’ve been here before, with Updike, Cheever, and, more recently, Franzen, to say nothing of such visual entertainments as American Beauty, Mad Men, and just about every sitcom you’ve ever seen. The Land of Steady Habits takes its title from an old nickname for Connecticut, and this is a new entry in that rich American genre, the novel of the suburbs. Thompson, refreshingly, finds his own path through this well-traversed landscape. Early in the novel, he takes us back some 40 years to the time when Anders and Helene first met as college students in Maine, and we learn that these two were once very different people before the obligations of family and career pressed all the joy out of their lives.

When we return to the present story, Anders and Helene no longer seem like such bitter suburban clichés, but rather sympathetic characters who have simply lost their way. During an argument, when Helene asks Anders why he is so unhappy and angry, he tells her that he is actually just confused. “Confused?” she asks, bewildered. “Honey,” Anders replies, “it’s a nice way of saying ‘fucked up.’”

Anders’ term of choice could be applied to nearly every character in the book, but none more so than his own son Preston and the Ashbys’ son Charlie. Although over a decade apart in age, there are a number of parallels between these two Lost Boys, both angry, troubled dreamers who simply can’t seem to find their place in the world despite – or more likely because of – a lifetime of privilege. Preston has finally managed to obtain a university degree, but soon winds up living in his car after scamming money from an immigrant he’s been tutoring at a charity. We get to know Charlie through a series of poignant and frequently druggy encounters he has with Anders; the two unexpectedly find a strange rapport at this purgatorial juncture in their lives.

Who’s to blame for the failures of Charlie and Preston? It’s the question that torments everyone, including Charlie and Preston themselves (who turn out to be more thoughtful and ambitious than they appear) but there’s no clear answer. Perhaps when you have a safety net all your life, you never gain the confidence needed to walk the rope alone. Still, one of the great charms of The Land of Steady Habits is that Thompson never really points fingers; ironic wit and absurd comedy abound, but he’s not interested in condemning the suburban life. His characters are neither shallow nor morally bankrupt; on the contrary, each is wrestling, however ineptly, with the vexing binaries of the human condition, the choices between freedom and obligation, between self-fulfillment and the commitments of love.

Although there are some minor flaws (some of the comedy can feel a bit orchestrated, and Anders’ resolution to his existential crisis seems a little too pat) this is a compassionate and funny debut, a worthy new tale of suburban lives gone astray.

Tyler C. Gore, a native New Yorker, lives in Brooklyn and has taught at Brooklyn College, Hunter College, and for Gotham Writers Workshop. His fiction, reviews, and essays have appeared in many journals, and he has been listed several times as a Notable Essayist by The Best American Essays annual anthology. He is the recipient of a Fulbright Scholarship for Creative Writing. He currently serves as editor and Art Director of Literal Latte, an online literary journal based in New York.

This witty collection explores how it is we fit into our own lives.