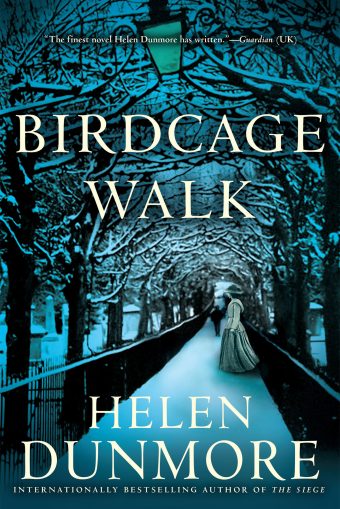 It’s Bristol, England, 1792, and a young bride, Lizzie Fawkes, is married to an older man who has designed a row of terraced houses along the river. He’s made quick money before in property development, and this new speculation should be no different — if anything, increasing his wealth tenfold.

But across the sea, the French Revolution is raging, and King Louis XVI and other nobles are in danger. Terror has blown across the channel, and many in England fear that their own monarchy can be toppled, too. This fear has sent the building boom crashing, and Diner Tredevant, Lizzie’s husband, is losing his shirt and becoming more and more controlling.

The opening pages of this novel are extremely inviting. During a walk through a churchyard, a widower in present times strolls with his dog, Jack, as he does often. He notices the tombstone of a woman named Julia Elizabeth Fawkes, whose marker was raised in 1793. He is particularly taken by the inscription: “Her Words Remain Our Inheritance.”

Intrigued, he consults a local historian about Julia’s life but finds no information. The novel then travels to the past, into the lives of Lizzie and her mother, Julia Elizabeth Fawkes. Julia is a secret dissident who has been clandestinely writing letters in support of the French Revolution, thus unveiling the simple mystery of the inscription.

The trouble with the story is that for the rest of Birdcage Walk, we’re led down a path that never seems to change — the novel never really gains steam. Lizzie is clearly trapped in a marriage that is growing more and more dangerous, but she doesn’t seem to feel the extent of fear we as readers need her to feel.

Tredevant comes and goes, returning to Lizzie only to brood and tell her what to do. He’s obviously untethered, but the clues of his potential violence aren’t quite frightening enough. Lizzie goes about her day, does her best to keep the house in order, and visits her mother even though she knows her husband would not approve. We never sense that she is in any real peril.

One of the major pitfalls of the novel is the location. Bristol is described beautifully — I could see the heavy cloud cover and feel the wind across the gorge — but I kept wanting one of the main characters to get on a boat and sail for Paris; surely there was more action going on there than just these winds from France drifting through the sitting rooms of radical Brits.

I’m not sure why Dunmore chose to set her story in England during the French Revolution, and then not send one of her British characters across the channel. It’s understandable that a writer would want to explore the outskirts and ripple effects of a major moment in history, but the reader still needs to feel there is more at stake.

Helen Dunmore had a long, successful career as a novelist, and she is especially beloved by the readers of her native England. Sadly, she passed away three months before Birdcage Walk was published, and we will never be able to watch an interview or hear a discussion about why she became interested enough to write about Bristol in the time of the French Revolution.

In the end, though, Dunmore leaves behind an impressive legacy of wonderful novels, children’s books, poetry, and short-story collections that will surely be treasured for years to come.

Jen Conley is author of Cannibals: Stories from the Edge of the Pine Barrens. Her short stories have appeared in Thuglit; Out of the Gutter; Trouble in the Heartland: Crime Fiction Inspired by the Songs of Bruce Springsteen; and many other publications. She has also contributed to the Los Angeles Review of Books and is an editor at Shotgun Honey. Conley resides in New Jersey.