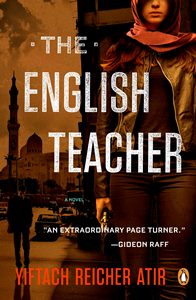 Rachel Goldshmitt, Rachel Brooks, Rachel Ravid. Who is Rachel, exactly? Knowing she is a Mossad operative involved in a dangerous undercover assignment only begins to answer the question.

In this dark, interior tale, identity is scrutinized from several angles: identity hidden, identity adopted, identity lost. How does an operative playing out her cover story hold on to who she really is underneath? What does she have to sacrifice to be effective? And is she, herself, the sacrifice?

The English Teacher begins with the disappearance of this seasoned and exceptionally successful operative. Her former mentor and handler, Ehud, along with another senior Mossad operative, is assigned to determine what happened to her.

While Ehud cares deeply about this woman, whom he has known and secretly loved for a long time, it is not caring alone that motivates him. A stray agent is a danger to the Mossad and to Israeli security. She knows too much. How could this person, who as a young woman immigrated to Israel and whose Zionist passion made her a fairly easy recruit, simply disappear?

Much of the novel follows the investigation conducted by Ehud and his associate, Joe. Their dialogue is a rich blend of their personal and professional lives. For Ehud, his future is at stake. While the two men have a high degree of trust and shared understanding of the spy business, there is a game going on in which Joe has the upper hand.

Another dimension of the novel follows Ehud’s interior life at various times in his life and in his relationship with Rachel. And yet another segment, by far the most provocative, though dependent on insights afforded by the other characters, follows Rachel: her challenges, her loneliness, her search for a way of holding on to a centered self among the variable selves she dons for her country.

Rachel, whose cover is as a Canadian citizen raised in England, enters an Arab city (probably left unidentified due to Israeli censorship) and finds work at a school specializing in teaching English. She had already developed this skill while living in the Israeli town of Rehovot.

Breaking every rule, but perhaps still with a spy’s intent, she allows herself an affair with an Arab man named Rashid. In his company, she can visit places at which she might otherwise seem out of place.

Author Reicher Atir handles the growth of their passionate love within the context of Rachel’s duplicity with astounding skill. Who can a liar trust? The narrator observes that, “You even look at people differently, listen to them in another way, assessing every word and inflection. This is the punishment of the liar — the one who lies habitually can’t trust anyone.”

Rachel’s missions include obtaining important information, taking photographs, performing an assassination, and blowing up an enemy facility. Her terror is the fear of error, the fear of discovery, and the fear of not being able to control herself — to stay fully in her role without ever striking others as role-playing.

She becomes a Mossad superstar, but of course private celebrity affords little satisfaction. No one outside the Mossad can know.

Reicher Atir, who served in Israeli intelligence, raises important issues in this remarkably revealing novel. At one point, Ehud says, “There’s something intoxicating in our work; suddenly it’s permissible to lie, you can put on an act, and everything is sanctioned by the state. The operative is licensed to commit crimes. He steals, sometimes he even kills, and instead of going to prison he gets a commendation.”

The justifications for asking people to accept this inverted morality are at hand (saving the lives of others, etc.), but readers are left to wonder about the costs to the operative. Essentially, secret agents are on their own. They have no recourse to justice if captured, no expectation of assistance if things go wrong. They are expendable.

Ehud’s search for Rachel is simultaneously a search for himself. The end of the search is a chilling surprise, a fitting resolution to the many questions the novel explores, not only about these haunted characters, but also about the nations and institutions that train, employ, and brutalize such brutal operatives.