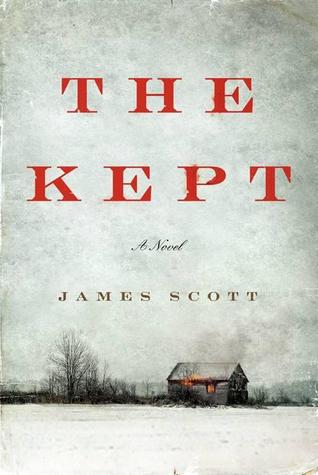 On a cold evening in the winter of 1897, a midwife comes home to discover her farmhouse riddled with bullet holes. One by one, Elspeth Howell finds the murdered bodies of her husband and four children. Before finding her son Caleb, the only survivor of the massacre, Elspeth is shot.

This is the startling and violent opening to The Kept, James Scott’s ambitious debut novel that is at once a story of revenge, of a long journey, of mothers and sons, and of 12-year-old Caleb’s coming of age. And none of these stories is as simple as it seems. Elspeth is not merely a victim but a woman tormented by her own sins; their journey is Caleb’s first glimpse of the world outside his home; and he and Elspeth are far from a typical mother-and-son pair.

Once Elspeth begins to recover, she and Caleb leave the farm in search of the killers. Their travels take them through the freezing winter of upstate New York and to a new town where they believe they’ll find the men they’ve been hunting. Here, the violence that colored the novel’s opening continues. Elspeth, disguised as a man, takes a grueling job working for an ice company on the lake. Caleb sweeps the floors at a brothel resembling a western saloon, complete with a sinister but impeccably dressed owner, a child prostitute and patrons shooting each other over cards.

If this sounds brutal, it is. Scott doesn’t spare his readers the gruesome details of the murders or the harsh realities of Caleb and Elspeth’s journey, but he pairs the violence with beautiful imagery, lyrical prose and heart-wrenching depictions of grief. When we witness the carnage of the murders, we also see Elspeth carefully changing the bed sheets under her husband’s body and Caleb brushing the falling snow off his dead sister’s face. These irrational and impossibly tender actions feel completely authentic for characters facing such shock and grief. Even the most violent scenes are infused with elegant prose. Scott describes the aftermath of Caleb burning his family’s bodies, being unable to bury them: “stark white, in a smaller circle of ash no more than a yard from where he stood, rested the skeletons of his brothers and sisters. They had fallen in on one another, arms wrapped in arms, legs hooked around legs, rib cages intertwining like hands in prayer.” It’s a horrifying scene, but there’s a strange beauty in the image of bones that appear to be praying.

Scott has also created a memorable, complex character in Elspeth. During their journey, Elspeth recalls her earlier life with her husband, how their family came to live such a secluded life, and the distance between Elspeth and her children. This is one of the novel’s driving forces: from the beginning, we know there is something off about Elspeth’s relationship with her children. Scott tells us that “she kept a list of the children’s names and ages, the years crossed out two and three times, so that when she brought gifts, she forgot no one.” It’s a discordant image — the midwife, a woman who earns her living by delivering babies, needing a reminder of her own children’s ages.

Indeed, Elspeth is a deeply flawed parent. As the book flashes back to her early days as a mother, we see her very loving toward her babies, but losing interest in them as they grow. When her son Amos is born, she quickly forgets his older sister; when Amos has grown, she longs for him to be a baby again and even imagines herself taking a razor to his newly grown hair to “restore the baby to what she thought of as its natural state.”

It’s not surprising then to see how little Elspeth knows about her only surviving son. As they travel together, Elspeth slowly begins to know this child that she has paid so little attention to over the years. She struggles to finally become a mother to Caleb, facing the many ways she failed her son in the past and the ways she continues to fail him even as their journey nears its end.

As the novel progresses, Elspeth often feels she is heading toward some punishment for her sins, while Caleb is thinking only of revenge. His frustration with his mother grows when he feels she’s forgotten the reason for their journey, and he is determined to press on, to “try another town and another until they ran out of world” to find the murderers.

The revenge story works well alongside Caleb’s coming-of-age. Early on, Caleb casts himself in a fantasy of how he might have stopped the killers, in which he protects his sister, leaps the fence with his gun and catches the men off guard, telling them “there’ll be no killing today.” It is undeniably the imagining of a 12-year-old boy. Caleb grows over the course of the story as he leaves the farm for the first time and confronts not only the realities of revenge, but the world outside his farm and the truth about Elspeth.

From the first moments of their loss through the end of their journey, Scott has created a world in The Kept that is both devastating and gorgeous. The setting is harsh and beautiful, and violence illuminates moments of grace between a mother and a son who have no one else left, and are still struggling to know each other.

Kara Oakleaf received her MFA in fiction from George Mason University. She currently works at George Mason and manages the annual Fall for the Book literary festival.