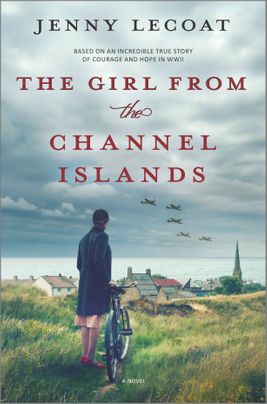 In her debut novel, The Girl from the Channel Islands, author Jenny Lecoat skillfully weaves the hardship of war, the power of resistance, and the strength of forbidden love into an intimate story of survival.

When the Nazis occupy the Channel Islands in 1940, transplanted Austrian Hedy Bercu can’t imagine what’s in store for the people who live there. Except for one friend, she is alone on Jersey. Hired as a nanny by a family that’s since fled, Hedy is terrified now that the Germans have commandeered her part of the British Isles. That she is Jewish makes her situation even more dire.

Without a job, Hedy is on the brink of starvation when she reluctantly applies for work at Nazi headquarters as an interpreter. It’s unusual for them to hire a Jew, but desperate for German/English interpreters, they do. To survive, Hedy must work for the enemy. To mollify her subsequent guilt, she sabotages the Germans by stealing petrol coupons and giving them to a local doctor to use for transporting the sick:

“She had swindled her overlords, scored a victory. No longer a collaborator, she was now a resistance fighter. Hiding in plain sight within the snake pit, trickling poison into their nest, throwing a V-sign to the entire German nation.”

When some of the coupons fall from her coat, Hedy assumes she’ll be accused of theft and deported. Instead, a Nazi officer named Kurt — who seems friendly but whom Hedy fears she can’t trust — claims responsibility for the incriminating items and is punished.

As their friendship grows, Hedy discovers that Kurt was drafted into the army; he doesn’t support the Nazi cause or even the war. Like Hedy, he’s just trying to survive. As Kurt tells her, “If you lump an entire race together and believe every person is the same, then you’re no better than Hitler.”

As the war rages on, living conditions on Jersey grow more dire — medicine, food, and clothing are in short supply for civilians; the Nazis seize everything. Soon, Hedy and Kurt’s lives depend on trusting each other and the dangerous love that’s grown between them.

The desperation of living under occupation oozes from the book’s pages. We feel Hedy’s fear as she hides under the floorboards, and Kurt’s disgust over his countrymen’s objectives as he struggles to keep her alive. As the risk to both of them grows, they must devise a plan to stay safe until the war is over. But can they hold out that long?

Lecoat tells the story from a place of intimate connection. She was born on Jersey 16 years after the Nazis sent members of her family — fighters in the resistance — to concentration camps. She ably portrays the prejudices that took root on both sides during the invasion of the Channel Islands and, reflecting the blurred lines between intimate relationships and official obligations, shows how one person can subvert even the most ironclad rules through small acts of rebellion.

Ultimately, along with offering the expected drama of a WWII novel, The Girl from the Channel Islands, in its depiction of Germans fighting for the Nazis despite their own moral qualms, poses a provocative question to readers: What ethical boundaries would you cross in the name of survival and staying true to yourself?

Hold the Dark: A Novel

A harshly beautiful setting and recurring wolf motif give this mystery a real bite.