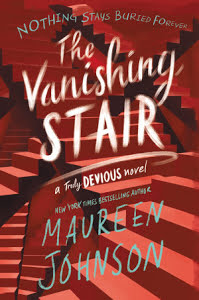 Ellingham Academy is a prestigious Vermont boarding school founded by eccentric billionaire Albert Ellingham. Its students are encouraged to think of learning as a game while pursuing their passions. Some of them come to the academy to write, others to create. That's the one thing that binds the students together: "Everyone at Ellingham Academy had a thing."

In 1936, Albert Ellingham's wife and daughter, Iris and Alice, were kidnapped. Despite doing as the kidnappers asked and paying a ransom, Ellingham never reunited with his family. Iris' body was soon found; Alice was never recovered.

The biggest clue in the case was the “Truly Devious” letter — an eerie poem reminiscent of Dorothy Parker that promised violence and maybe even death.

Stevie isn't the first person to try to solve the case. But she has something no one else does: new evidence. It's all contained in an old tea tin filled with "a bit of white feather, a bit of beaded cloth, a tarnished, gold-colored lipstick tube with the mummified remains of a red lipstick, a tiny enameled pillbox in the shape of a shoe, some pieces of notebook paper and black-and-white photographs, and the unfinished draft of a poem."

Together, these "humble objects" are proof that the infamous Truly Devious letter may not have been tied to the case at all, but a student prank.

The problem is that Stevie's parents pull her out of Ellingham mere weeks into her first term, after the death of another student, Hayes Major (whose murder Stevie tried to solve). Knowing what happened to Hayes, and knowing that another student was likely involved, Stevie senses missing pieces.

Was Hayes' death an accident or something worse? And what happened to Ellie, the most likely suspect, after she disappeared through a passage before she could be interrogated?

Stevie isn't sure how she can answer these questions without being at Ellingham — a problem remedied by the unlikely and unlikable Edward King, "the worst man in America" (and a thinly veiled imitation of Donald Trump), who offers Stevie the chance to return to Ellingham in exchange for keeping tabs on his son, David, who is finishing his last year there, ideally without impeding his father's presidential aspirations.

It's an impossible bargain, and Stevie knows she has to accept even if it means avoiding David and their mutual attraction. Knowing her time at Ellingham can end at any moment — especially since her presence seems to be doing very little to ground David — Stevie focuses on solving the case, which leads to shocking revelations about the school's past.

The Vanishing Stair’s author, Maureen Johnson, a mystery lover and true-crime aficionado, imbues her heroine and this second installment of the Truly Devious series with that same love and respect for investigation. Stevie's work isn’t glamorous, nor does it involve shortcuts. She knows she doesn't "have all the answers," but she isn't afraid of the grunt work it takes "to find the lead, to find the single sentence in the single piece of paper that made you stand so suddenly that your head spun and then you’d know that you cracked the case."

Stevie's keen eye for investigation is tempered by real-world concerns like figuring out what her feelings for David mean and managing her anxiety with a combination of medication and other coping mechanisms. Stevie's friends are quick to help, but she knows that her anxiety can manifest at any time since "anxiety and excitement are cousins: they can be mistaken for each other at points."

The novel follows Stevie with a close-third-person narration. Trial transcripts and witness statements are interspersed throughout as Stevie delves deeper into the Ellingham case. Alongside her, readers follow the case to its surprising conclusion via chapters chronicling the varying perspectives of key players and witnesses.

While much of the Ellingham case is solved here, readers can expect a new mystery as Stevie is left to figure out how to reveal her findings — not to mention lingering questions over the school's more recent spate of deaths. This series is a must-read for YA-mystery lovers, but be sure to start at the beginning with Truly Devious before diving into this one.