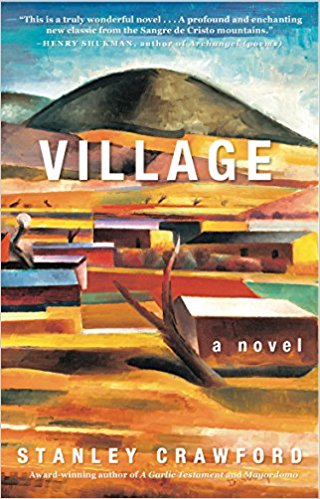 True to its name, Stanley Crawford’s new novel, Village, is set in the isolated village of San Marcos, New Mexico, population 763, and is told from the points of view of 20 or so residents. The characters face various personal crises, but together, in the last decade of the 20th century, they are threatened with what may be the ultimate challenge: the loss of their water.

The composite narrative spans a single day, beginning with a “Dawn” prologue, pausing for a “Noon” reflection, and ending with “Sleep,” three omniscient sections that establish the arid landscape and trace the flow of the village’s scarce water through the all-important acequias, or irrigation ditches.

Other than the village itself, if there is a central character in the book, it is Porter Clapp, a paranoid hippie holdover who long ago mistakenly burned his Social Security card instead of his Draft Card during an antiwar protest at Berkeley. Since then, believing he has committed a crime, Porter has lived what he hopes is an under-the-radar existence — without a license, credit cards, bank accounts, etc. He and his partner, Stephanie, have sought refuge in remote San Marcos.

Although Porter stands out as an Anglo in a largely Hispanic community, he feels at home: “He felt safe. They couldn’t type him. They wouldn’t judge him for his tangled graying blond hair, always too long, or for his clothes that were never quite clean and never new, for his and Stephanie’s constant financial worries and their too-old station wagon and his lack of a regular job.” Like the locals, he and Stephanie are barely getting by.

When Porter learns that a town meeting with a government official has been called for that night, ostensibly about water rights, he worries that he’s finally been discovered. “He gasped for air. Official notices all affected him the same way. Each one was a sign that the outside world was moving closer, staking its claim.”

The villagers go about their day, each anticipating the meeting in his or her own way. Stephanie’s frustration with Porter bubbles over. She has a run-in with Onésimo Moro, the laidback owner of the only grocery store in the village. Isabel Moro, his watchful wife, worries about the growing unpaid accounts of the store’s customers.

Lázaro Quintana, keeper of San Marcos’ largest acequia, spends the day following the flow of water through the ditch, noticing and clearing debris. Young Zip Zepeda Jr.’s preparations for a date are disturbed when his father, the town’s undertaker, needs him to pick up the body of the village’s oldest resident. Len and Carrie Mott, with grandiose schemes of expanding their landscaping business, make plans to fulfill an order in Santa Fe, some two hours away.

Russell Banks’ The Sweet Hereafter is also a story of a community, one reeling from a tragic school-bus accident. But in contrast to the over-population of Village, Banks tells his tale through an economical four points of view, those perspectives being sufficient to represent the community. A large number of voices dilutes the narrative and impedes the forward momentum of Crawford’s novel.

Eventually, the day has worn on and Porter attends the meeting, sure that he will be unmasked before his neighbors. Others in the village have more realistic concerns about the gathering, as they’ve witnessed the government gradually chipping away at their rights.

Mr. Molinas, the postmaster, makes the point to the representative of the State Water Office: “‘You don’t know, do you, that this was all once the Anastasio Moro Land Grant, do you, by the King of Spain who signed the original papers, you can find them in the state archives, you don’t know that, do you?’ This he said with a sweeping gesture of both arms toward the roof and presumably the heavens themselves. ‘All, everything, todo, used to be ours.’” But, he complains, the state took the land grants. The railroad cut down all the trees. The government levied taxes. And now they’ve come for the water.

Despite the enormous cast and the many loose threads they create, Village is a charming story of resistance to oppression, both historical and contemporary. And it is easy to sympathize with the villagers’ suspicions of government intentions and with their many acts of rebellion large and small.

Clifford Garstang is author of the novel in stories, What the Zhang Boys Know, winner of the 2013 Library of Virginia Literary Award for Fiction, and a story collection, In an Uncharted Country. He is also the editor of Everywhere Stories: Short Fiction from a Small Planet, Volumes I and II, anthologies of stories set around the world.