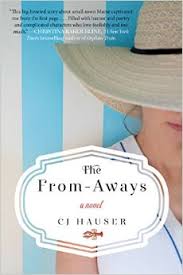 CJ Hauser, in her debut novel, The From-Aways, tells a story of loving and learning, coming together and growing apart, leaving home and finding your place. The place alluded to in the title is Menamon, Maine, a fictional fishing village populated with an idiosyncratic cast of locals, but it could be any small town. If you are partial to New England, if you like authentic, complex characters, if you think happiness and sadness are separated by the finest of threads, you will savor this book.

Through the voices of two women — Leah Lynch and Quinn Winters, both out-of-towners (“From-Aways”) — who come to the coastal Maine town by separate paths, the story unfolds in alternating point-of-view chapters. Leah is a successful reporter in New York City when she meets and quickly marries Menamon native Henry, a landscaper who is working in the city to beef up his client credentials.

Quinn is a young woman from Connecticut seeking her folk-singer father, whom she never knew. The pair become unlikely colleagues at the local Menamon newspaper. They warily test their working relationship while covering a story that exposes town intrigue and challenges their personal assumptions about life and love.

While Quinn and Leah work as journalists investigating a local land deal, they both begin to reassess their loyalties. Quinn, honoring her dying mother’s last directive to find her father, discovers a flesh-and-blood reality that doesn’t square with the man she imagined. Leah wonders if she really knows Henry, who seems uneasy about what should be a joyful return to his home town. She is torn between loyalty to her husband and her new attachment to her adopted town when Henry appears to be acting against the townspeople’s best interests.

“The key to not blowing your life apart is not asking too many questions,” Leah thinks, although she does just that in both her professional and personal lives. The questioning ultimately discloses a pleasant surprise for one woman and a damaging secret for the other.

Hauser’s characters are multifaceted: heroic, flawed, lovable, and contemptible, sometimes all at once. Henry is “the sort of man who had nooks and spaces all through him.” He is strong and dependable, but may be implicated in a shady land deal. Leah loves Henry, but is unwilling to give up a story that may hurt him.

Relationships are fluid; sometimes a murky trickle bursts into a clear, steady stream. Quinn’s father is protective of the town and its people, but seems not to have demonstrated that same regard for his own family. “Because you cannot always know with love. If we knew how things would turn out for certain, knew a person completely, that would be far too easy,” Leah explains as Hauser explores the question of what we really know about the people we love.

Suspense builds slowly as we discover the characters we thought we knew are doing unexpected things. This is not a whodunit. We know who, but we are trying to understand why. We become engrossed in the characters’ lives, with their hopes and dreams, insecurities and fears. Sometimes we can empathize, but sometimes we feel critical. We would do better, be wiser.

The From-Aways is also a story of the interaction between place and personality. Henry is a product of the hardscrabble fishing village where he grew up surrounded by friends and a loving family. His folksiness and “stillness” attract Leah immediately, to the point that she falls not just for the man, but also for the town that she perceives shaped him.

Leah is a city girl who sees Menamon as the home she never felt she had with her emotionally distant parents. Her relationship with Henry is inextricably tied up with her attraction to his New England roots.

Hauser, who grew up in Reading, Connecticut, and moved to New York, where she attended Brooklyn College, understands the allure of both city and village life. She speaks to the dichotomy of small-town life: small towns can be safe harbors with trusted friends, but also traps with professional limitations, where getting ahead means getting out.

The writing is well crafted and rings true in the analytic, educated, urbanized voice of Leah, as well as in the raw, hard-edged, boozy voice of Quinn. Hauser forms beautiful, multilayered images. We can hear and feel the ocean in “the slop and pull of the water.” Bells that “chime a frozen tinkle” evoke the crisp chill of a New England winter.

Hauser’s first novel is an admirable extension of the short fiction she has published in Tin House, TriQuarterly, the Kenyon Review, Slice, and Esquire. I’m looking forward to her next book.

C.B. Santore is a freelance
writer and editor in Fairfax, Virginia.

If You Leave Me: A Novel

A riveting story of star-crossed love set against the turbulence of the Korean War and its aftermath.

What Is Missing: A Novel

A father and son fall for the same woman in this lopsided, ultimately frustrating tale.