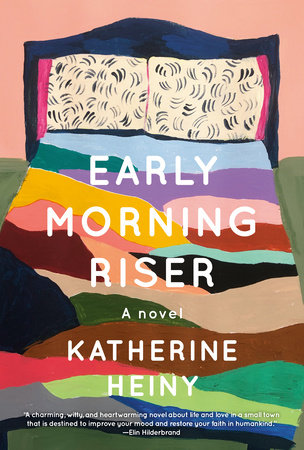 Imagine your college roommate, let’s call her Jane, graduates and moves away to teach in a tiny town in far north Michigan. Every few years, you get together to catch up. Because Jane has always attracted odd people, has a wry sense of humor, and is a great storyteller, you look forward to these meetings. Katherine Heiny’s new novel, Early Morning Riser, is Jane’s story.

In 2002, Jane moves to Boyne City, Michigan, to teach elementary school and, in the first month, locks herself out of her house. She’s sitting on the front steps wearing pjs — it had been second-grade pajama day — when Duncan arrives. Long, lean, and capable, “He seemed to stand out vividly like the subject of a photo with a blurred background. Like the Brawny paper towel man.”

She invites him to supper because he didn’t charge anything to unlock her door and because, since moving, the only male she’s talked to is an elderly man who’d lost his car in a parking lot. The conversation is lively. Jane learns that the dentist has a drinking problem, and the guy down the street peeps through windows with binoculars.

She also learns Duncan was married to Aggie, but it’s long over, although Duncan still mows her lawn. Aggie is now married to Gary, a man so passive and monosyllabic, he could be a plant. After dinner, Jane and Duncan fall into bed, where they stay until Monday.

Soon, Jane discovers Duncan has happily slept with most women in town and maybe in the county: the assistant children’s librarian, a member of local band the Jug Bandits, her neighbor at a Grateful Dead concert, even Aggie after she remarried. But those women are in the past, no strings, over, done, so what’s the problem?

Of course, for love-stricken Jane, try as she might to adjust, it is a problem. Her heart feels “like a sponge you find forgotten under the sink: wrinkled and stiff and squeezed dry.” The threat that Duncan will cheat on her rumbles through the entire novel.

Heiny’s writing is amusing; she uses droll asides and odd thoughts to good effect. “Jane wore a dark green maxi dress with yellow and maroon flowers, and her mother said it made her think of three-bean salad, the kind with garbanzos.” However, in the early chapters, the little jokes are relentless and begin to seem forced. At a reading for her first novel, Standard Deviation, Heiny told of writing an email to her son’s teacher. Her son said, “Don’t try to be funny." The reader may sympathize with him. Luckily, in the later chapters, the prose settles.

In chapter two, it’s 2004, and Jane is getting married. Almost immediately, the marriage appears a mistake. The groom is dull, the homemade mason-jar centerpieces are ugly, the wedding gown resembles a pink prom dress, and Jane’s mother appears, setting everyone on edge with her talk of Lyme disease and wool socks.

The reader fully expects the nuptials to be called off. Which they are. Yet the reason for the cancellation is the darkest moment in the novel and has long-lasting consequences. Sadly, it happens offstage, reported but not seen, the light tone barely interrupted.

The story continues through five long chapters, ending in 2019. The frothy mood sobers slightly as Jane ages and as the focus shifts to Jimmy, a kind young man who works for Duncan. Jimmy is slow, his speech repetitive. He can’t change a light bulb, read a bank statement, or tell the difference between gas and electric, so when tragedy leaves him without the care he desperately needs, Jane steps in, vowing to look after him. That decision changes her life in a surprising way.

The story of Jane, Duncan, and Jimmy is interwoven with fun details about second grade. Tad Berman is a math whiz who doesn’t know the months. Scott Stafford struggles to read and write, but at recess he’s a master of the climbing structure. The parents come into play, too. Brianna Wooten’s mother lets the hamster out of the cage at a parent-teacher conference; Lindsey Mercado’s father accuses Jane of spreading lies about moonlight.

In addition to naming even the most minor characters, Heiny notes their looks and clothing. Jane’s fiancé has “a slanting, light-filled smile,” and her future father-in-law’s skin is like “sand-blasted granite.” She wears a silk robe “embroidered with daisies that were coming unstitched”; her mother dons a dress with “colorful chevron patterns that hid stains well.”

The constant cataloguing of such details makes the characters vivid but also keeps them on the surface. Only Jane has an inner life; the others, even Duncan, merely accompany her. She’s in charge of the story and she wants to keep it upbeat.

Occasionally, the mass of detail causes the novel to stall. In one long section, Jane invites a series of community leaders — a doctor, a yoga teacher, a health inspector/roofer, and even a bartender — to speak to her class. Their segments interlace with Jimmy’s very real travails, and the lighthearted lectures dilute the seriousness of his plight.

On the whole, Early Morning Riser is an entertaining, fun read, with more than a soupçon of heart. If the last year has worn you down, if you miss sitting and catching up with close friends over coffee or wine, this book is for you. Pull up a chair, pour yourself a drink, relax, and meet Jane.

[Editor's note: This review originally ran in 2021. Also, Katherine Heiny will appear at this year's Gaithersburg Book Festival on May 21st in Gaithersburg, MD.]

Terri Lewis recently moved to Denver, CO. She lives with her husband and two dogs: Tango, who belongs in the circus, and Chloe, the mega-chewer. She’s currently writing a novel.