A Forgery of Roses

A young artist must hide her resurrective gifts or risk exposure — or worse. 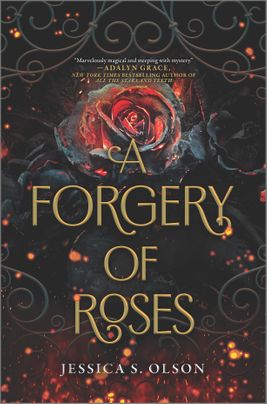 In Jessica S. Olson’s A Forgery of Roses, painters are disappearing throughout Lalverton. Yet the devout say the vanishings are just treatment for those who choose to paint — a holy activity seen as solely the domain of the Great Artist. Conservatives, including Lalverton’s governor, fear the growing popularity of portraiture; the presence of magic makes the taboo artform even more of a threat.

With her mother — a Prodigy and talented artist — among the missing, Myra Whitlock knows she has to hide her own supernatural gift if she wants to keep herself and her younger sister, Lucy, safe. Scriptures are clear that Prodigies are “a defilement of the power of our god, the Great Artist.”

With magic that “gives a painter the ability to alter human and animal bodies with their paintings,” Prodigies’ pieces have long been seen as “even more of an abomination than normal portrait work.” Their ability also means Prodigies “have been persecuted by the pious and captured by the greedy since the dawn of time.”

Lacking proper training and control, Myra and her powers are especially dangerous. She can manipulate a person’s sevren threads to alter their appearance and heal injuries, but she can’t dictate when or how her magic will work. Instead, she must paint while it buzzes “like a swarm of bees inside [her] head.” With finances dwindling in the wake of her parents’ disappearances, Myra desperately needs work in order to survive — and to pay for the nurse Lucy needs to help manage a chronic illness.

When Myra’s magic is discovered by the worst person possible, the governor’s wife, she forges an uneasy bargain with the woman. If Myra can use her gift to resurrect the governor’s dead son, she could earn enough money for a proper home, tuition to attend the conservatory, and even a real doctor for Lucy. If she fails, she will be exposed as a Prodigy, and her life could be forfeit.

Spirited to Rose Manor in the dead of night, Myra has four days to complete her work before the young man’s body decays beyond help. Amid the “ancient wealth and finery,” she sets to her grim work. But it soon becomes clear the governor’s son did not suffer an accidental fall, as Myra has been told. Something more sinister is at play.

Author Olson blends mystery and suspense with a gothic sensibility in this standalone fantasy where all the characters are assumed white. Myra narrates with an artist’s eye, as when she describes making ladyrose gel from burnt flower petals:

“As soon as it hits the water, the rose blood fans out, a spiderweb of shimmering scarlet veins crawling through the pot until the whole thing clouds like it’s full of sparkling garnet dust.”

Myra’s keen eye for detail also serves to increase tension and broadcast danger, with one character described as having eyes that “glimmer like pond-slick moons” and “pearl earrings [that] glow milky white like bones on either side of her face, twitching with every word she utters.”

To resurrect the governor’s son, Myra has to understand the circumstances of his death and his emotional state when he died. As she explains, sevren are the “connective fibers that bind the soul to the physical form, they’re born from each person or animal’s emotional perception of their bodies. The more emotionally significant a physical feature is to that person or animal, the tighter and denser the bonds become.”

Because of this, she takes a clinical approach to the cadaver she is trying to restore, noting “the crushed and mangled ear, the blood congealing on the hair, the fragments of skull and brain tissue” while carefully painting the body as it is before layering in her changes.

Feeling a sense of urgency as time begins to run out and her efforts continue to fail, Myra works (and flirts) with August to investigate his brother’s death. While searching for clues together, August opens up about his struggle with severe anxiety:

“This anxiety will always be a part of me. It’s not going anywhere, and I’m going to have to live with it for the rest of my life. But I am not broken because of it.”

Myra’s desperation to complete her work before she is exposed only increases when Lucy’s illness takes a turn for the worse. Although unnamed, the malady evokes Spoon theory, described here as juice in a glass where “every action of daily life — getting out of bed, bathing, dressing, doing research — siphoned juice away. Once the glass was empty, no matter how much she had left she needed to do or how much she’d hoped to get done, her body needed to rest. To refill the glass.”

A Forgery of Roses combines art, fantasy, and a truly surprising mystery with authentic and respectful representations of anxiety and chronic illness — both of which are seen as points of strength rather than flaws. Myra and August’s romance and a final act filled with the surprise twists that are a hallmark of the best gothic literature further enhance this story in which a picture is worth much more than a thousand words.