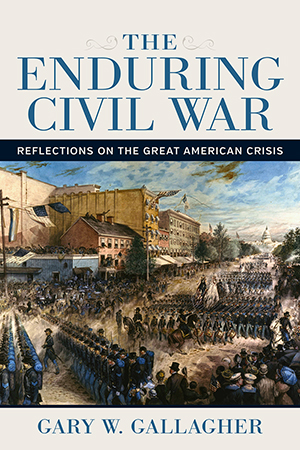 There is something for everyone in historian Gary W. Gallagher’s The Enduring Civil War, a collection of 73 essays he wrote for the popular magazine Civil War Times over the past decade. The book is both timeless and timely.

“Many of the profound questions” the war raised, he writes, “remain present…as we move through the second decade of the 21st century,” and into the third, he might have added.

Gallagher adheres to the adage that if both sides attack you, then you must be doing something right. To illustrate this, he keeps two files of hate mail: one from neo-Confederates, the other accusing him of being a neo-Confederate.

“The past is never simple,” he writes, with “vexing shades of gray.” Instead of ideology, he advocates “historical literacy,” where facts matter:

“Letting ideology fuel an interpretation recalls Lost Cause writers who used selective evidence, airbrushed slavery and other negative elements of the southern rebellion and came up with a shiny version of the Confederacy. Ideology can lead to pretending slavery-related issues were not central to the coming of the war, or, conversely, to suggesting that the Union war effort had little or no meaning beyond its eventual embrace of emancipation.”

British historians, he notes, traditionally took the Southern side well into the mid-20th century, among them Winston Churchill, confirming what Robert E. Lee and other Confederate generals “hoped would be the case — that winners do not always control the public memory of historic events.”

While many of the essays will appeal to Civil War buffs who visit battlefields and study troop movements, Gallagher, emeritus professor in Civil War history at the University of Virginia and the author of more than 40 books on the war and its memory, digs deeper.

His essays on historiography and historians are welcome additions to the canon. He writes about lesser-known along with well-known historians, devoting an entire essay to Bell Wiley, a forgotten female historian who explored the lives of common people during the war. But he notes that Wiley, in one sense groundbreaking, also “betrays attitudes and phraseology that offend modern sensibilities.”

Surprisingly missing from his essays are the names of prominent Black Civil War-era historians, such as John Hope Franklin, Benjamin Quarles, and W.E.B. DuBois. Also excluded is any mention of Marxist historian Howard Zinn, whose influential writing focused on economic issues of free and enslaved labor leading to the Civil War.

Gallagher devotes an entire essay to photographic imagery in shaping popular views of the war — as a boy, he was particularly taken by a portrait of Confederate cavalier J.E.B. Stuart. Elsewhere, he deals with more recent cinematic treatments, from “Glory,” the story of the 54th Massachusetts Infantry of the U.S. Colored Troops, “a Civil War classic,” to Steven Spielberg’s “Lincoln,” which, he writes, underplays the cause of Union over emancipation in the president’s thinking. “The new emphasis,” he cautions, “carries dangers of misrepresentations as well as welcome attention to the foundational aspects of the war.”

Gallagher’s compilation, prepared before what appears to be a new national awakening and reckoning with the country’s original sin of slavery, could not be timelier, though the constantly changing landscape makes some of it seem not so revelatory and almost dated.

He mentions the June 2015 massacre of nine Black worshippers in Charleston, South Carolina, and violence resulting in one death in Charlottesville, Virginia, in 2017. But he makes no mention of the Black Lives Matter movement that arose over several publicized police homicides, all arguably springing from the same poisonous roots that have far outlasted the Civil War. The nationwide protests over the May police killing of George Floyd in Minneapolis apparently came too late to be included.

“Did the war end in 1865?” Gallagher asks. While recognizing its long-term consequences, the author asserts that the armed conflict “did end” that year:

“Too great an emphasis on the long Civil War can reduce the war itself to just one episode or event among many — and strip Appomattox of any claim to signaling the conclusion of the nightmarish conflict.”

The problem with this is that the nightmarish conflict continued for more than a “postwar” century, with more than 4,000 documented lynchings of Blacks in the South, and, for many, continues today.

And battles over who won the peace are ongoing as unreconstructed Rebels, determined defenders of the Lost Cause, continue to fight in ways that still divide our nation.

“Ongoing controversies over the Confederate memorial landscape constitute just one element in the Civil War’s long-standing power to affect the nation and its citizens,” he writes in his introduction. “Sadly, some school administrators, both public and private, support avoiding the Civil War because discussions about slavery, massive bloodshed, and controversial memorial landscapes can cause discomfort among students and their parents. But a free society should confront its past, warts and all.”

That seems to be happening, but there remains the danger that the reckoning also risks hiding the past transgressions from public view as statues topple and names of schools — and even streets and highways — change to comply with “modern sensibilities.”

Symbols are easy to remove; rooting out systemic racism, not so much. And there is the danger that “anti-racist” curricula may replace the “historical literacy” that Gallagher rightly deems essential.

On the one hand, there is the wisdom of philosopher George Santayana that “those who cannot remember the past are condemned to repeat it.” Then, of course, comes William Faulkner to remind us: “The past is never dead. It’s not even past.” Gallagher’s essays affirm that both are so.