Recalling two titans' contrasting visions and the unprecedented role of the media during a time of immense upheaval in the U.S. 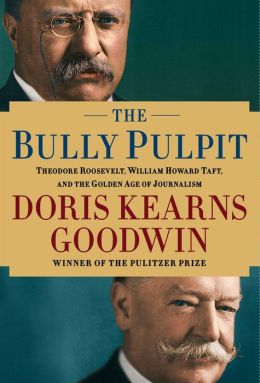 The “bully pulpit” is a modern, if overused, presidential catchphrase. Candidates pledge to use it wisely if elected. Interest groups urge incumbents to employ it more often. Few people realize that Theodore Roosevelt coined the expression over a hundred years ago to describe how the president can skillfully use his office to promote his values and programs. Fewer still recognize that TR’s metaphorical parishioners included not just voters, but journalists as well.

Doris Kearns Goodwin illuminates TR’s vision, contrasts it with that of his successor and one-time close friend William Howard Taft, and highlights the unprecedented role of the media in The Bully Pulpit: Theodore Roosevelt, William Howard Taft, and the Golden Age of Journalism. In so doing, Goodwin uses her exceptional storytelling skills to shed a new light on a period of immense political, economic and social change in the United States.

At times it seems that one is reading a book titled TR and Friends. Though Goodwin clearly respects Taft, she loves TR. Readers who don’t know much about that era will learn about the “big picture,’’ even if one sometimes feels she is playing a game of “six degrees of Theodore Roosevelt.”

TR has been the subject of many books, of quite varied quality. The most balanced biography remains Henry Pringle’s 1931 Pulitzer Prize-winning Theodore Roosevelt: A Biography, which is admiring though not hagiographic and treats Taft with respect. In fact, the book led the Taft family to pay Pringle to write Taft’s official biography. His even-handed two-volume work, The Life and Times of William Howard Taft (1939), is the last comprehensive cradle-to-grave treatment of the subject.

TR and Taft were close friends and political allies, dining together frequently and helping each other rise politically. Taft helped TR secure his appointment as assistant secretary of the Navy under President McKinley. Later, while serving as civilian governor of the Philippines and secretary of war, Taft provided steady counsel to TR during his presidency. The two men bonded in part because they were both brainy men from privileged backgrounds who shared progressive views on many issues and tried to change the Republican Party from within.

“There was a time, at the height of their careers, when Theodore Roosevelt and William Howard Taft stood shoulder to shoulder as they charted a different role for the U.S. government that would fundamentally enlarge the bounds of opportunity and social justice,’’ Goodwin writes.

That quote seems to capture Goodwin’s purpose for writing this book. She uses the past to illustrate disparate forces working together towards a common liberal goal — clearly implying her wish that contemporary figures would do the same.

By using Roosevelt and Taft to illustrate her point, she couldn’t have picked two more distinct personalities.

TR was a boisterous man of action who saw the world in black and white terms. He didn’t care if he cut corners to achieve what he saw as righteous goals. A larger-than-life figure, he needed to be the center of attention at all times.

Taft, on the other hand, was a cerebral, contemplative man with a judge’s penchant for weighing all sides of an issue. He was uncomfortable using stinging political rhetoric and felt that, no matter how worthy the objective, following the rules was paramount. He knew his own worth and took pride in his achievements but wasn’t keen on self-promotion.

TR’s love of publicity enabled him to successfully use the media to promote himself and his ideas. Goodwin skillfully chronicles how several key journalists of the era, including Ray Stannard Baker, Samuel McClure, Lincoln Steffens and William Allen White, exposed corporate and governmental misdeeds that set the stage for the reforms TR and Taft supported. These included stronger antitrust laws, stricter regulations of food safety and campaign finance reform.

When TR was president, he often helped these journalists plan their coverage and even reviewed stories before they appeared in print. It was an early, and more liberal, version of Fox News — though the journalists at the time never claimed to be “fair and balanced.” They were writers on a mission and didn’t try to hide it.

Goodwin’s discussion of the press sometimes gets bogged down in minutiae. Readers don’t need to know the details of seemingly every budget problem or turf fight among writers at McClure’s.

When Taft became TR’s hand-picked successor to the White House in 1909 (TR had promised in 1904 not to seek reelection), he failed to use the media as effectively to engage the public. Part of that stemmed from Taft’s unwillingness to fraternize with reporters as TR did and part of it was that the journalists were never as enamored of Taft’s persona and policies.

Taft struggled as president and was never wholly comfortable in the job. His growing ideological differences with TR (and Roosevelt’s desire to become president again) led to a public rift between the former friends and TR unsuccessfully challenging Taft for the GOP nomination in 1912. Taft prevailed in the fight but TR waged a third-party candidacy in the fall and came in second behind the winner, Woodrow Wilson. Taft came in third and carried only two states, Utah and Vermont.

Goodwin writes that, although Taft was the most conservative candidate in that race, “he did not intend to take the country backward, but rather to protect it against the demagogic proposals of his adversaries.’’ She admires Taft because he had progressive leanings.

TR and Taft eventually had a rapprochement several months before TR’s death in January 1919. Taft was visibly bereft at the funeral. Goodwin recreates their final meeting and the TR funeral rather poignantly.

Taft outlived TR by 11 years and spent almost nine of them in the job he had always longed for, chief justice of the United States.

The Bully Pulpit: Theodore Roosevelt, William Howard Taft, and the Golden Age of Journalism brings the distant past to life. Readers will gain a new perspective on that time period and enjoy themselves while doing so.

Claude R. Marx is an award-winning journalist who is writing a biography of William Howard Taft.

By Seth Levine and Elizabeth MacBride