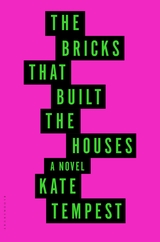 I love Kate Tempest’s name. I love her look, too, for its Joplin-esque qualities. And I especially love some of Tempest’s craftsmanship in her debut novel, The Bricks That Built the Houses. Tempest’s work is worth reading if only for the poetry of her writing and its so-called urban edginess. It’s also worth experiencing for a peek into the lives of England’s twenty-somethings, many of them as misguided and uncertain as America’s millennials.

In the first seven pages, we meet Harry (female), Leon, and Becky, who are leaving town — perhaps running away? “They’re driving past the streets, the shops, the corners where they made themselves. Every ghost is out there, staring. Bad skin and sunken eyes, grinning madly at them from the past. It’s in their bones. Bread and booze and concrete. The beauty of it. All the tiny moments blazing. Preachers, parents, workers. Empty-eyed romantics going nowhere. Street lights and traffic and bodies to bury and babies to make. A job. Just a job…People are killing for gods again. Money is killing us all. They live under a loneliness so total it has become the fabric of their friendships. Their days are spent staring at things. They exist in the mass and feel part of the picture. They trust nothing but trends.”

This dark, unflinching look at life — presented from an omniscient point-of-view — here and elsewhere often feels as if the reader is encountering the author’s perspective.

The next chapter takes readers back one year. We discover how Becky and Harry, the two characters who captivate the reader most, were drawn to each other at a party. This chapter is also filled with Tempest’s keen observations of characters, who, judging from Tempest’s age, might be considered her peers. They appear to be filled with an overly self-confident swagger one minute, and defeatist, confused self-loathing the next. Nor does she hesitate to poke fun at them.

Main character Becky, an aspiring dancer, finds herself in a “part of town full of professional creatives with dreams of simpler living — radical, secret aspirations for cottages and nuclear families.” On entering a party in a “fashionable bar,” she describes it this way: “Everybody’s talking about themselves. I’m doing this…It’s going great. And have you heard about this that I do, and this other thing as well…Questioning postures and emphatic responses. The air is heavy with cocaine sweat, hidden fragility and the prospect of good PR.”

Meanwhile, Harry, a local drug dealer, is making her way to the same party, but encounters a friend from the past, Reggie, a somewhat pitiful petty criminal (dealer of various popular drugs). The two are contrasted this way: “[Harry] moves in confident strides…She is all London: cocksure, alert to danger, charming, and it flows through her. Reggie’s face repeats on all the strangers she passes and her eyes prickle and she blinks hard. She sees a homeless woman sat with her head on her knees.” Harry has a heart, but she’s also tough.

And then there’s Harry’s partner in crime, Leon: “The agreement is that Harry handles (drug) sales, Leon handles everything else. Both partners know their roles and respect each other’s talents. For the most part, they love their jobs.”

And so, after the initial encounter between Becky and Harry, we are drawn into Becky’s love affair with Pete, who, in this novel’s maze of relationships, turns out to be Harry’s brother. The story moves from Pete’s aimless, unhappy life (and difficulties with Becky) to Harry and Leon’s drug deals.

Here, the author skillfully delves into the underbelly of drug dealing and criminals in London. Eventually, over a dinner where the central characters come together both accidentally and explosively, Becky and Harry meet again. And fall in love. Love and loyalty of various sorts abounds in this novel. Betrayal and disappointment are also around every corner.

Unfortunately, the book is divided between the present-day story of the main characters (in their 20s) and the backstories of their parents and grandparents. This is where I had trouble. I loved the present-day story but felt ambivalent at best about the lengthy, lecture-like backstories of the main characters’ families, most of whom seemed doomed to an impoverished, down-trodden existence. The “system” was to blame in each case, and while often I felt sympathetic to what appears to be Tempest’s perspective, at times it seemed a little too predictable and too pessimistic.

This reader had to re-read these pages in an attempt to remember who was who, who was connected to whom, and how they figured into the story. These grinding, packed-with-fact mini-biographies are in such contrast to the magnificent prose littering the rest of Tempest’s dramatic pages that I kept wondering: Where’s the editor in all this? Why didn’t he or she advise Tempest to cut these, or properly weave them in, or use dramatic storytelling for these boring backstories if, in fact, their entirety is so important?

If you can skim these lengthy passages and get to the more compelling pages of The Bricks That Built the Houses, I think you’ll be glad you read this debut novel from a woman who is described as having “gained acclaim as a poet, playwright, rapper, and recording artist.” I hope we haven’t read the last from Kate Tempest. I’m sure we haven’t.

Herta Feely’s debut novel, Saving Phoebe Murrow, will be released in September 2016 by Upper Hand Press (U.S.) and Twenty7 Books (U.K.). She is a DC-area writer and editor.

What Red Was: A Novel