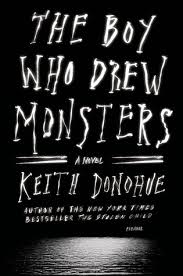 I don’t sleep well. Never have, not since I was a child. Of all the advice I’ve received to combat this, the best was also the worst, at least for a writer: Don’t read in bed. Train the brain, the thinking goes: Bed is for sleeping, for sleeping, for sleeping. Get in, turn out the light, close your eyes, and get to work on getting to sleep.

Good luck, though, if you’ve got a copy of Keith Donohue’s new novel, The Boy Who Drew Monsters, sitting there, its matte black cover staring over from the nightstand. You’re not going to sleep easy for a good long while.

No one does in the Keenan household: not Holly, the mother, capable and calm — except when she hears strange noises outside their house on a rugged stretch of Maine’s coast; not Tim, her husband, quicker to anger (perhaps because he’s hiding a guilty secret), quicker to act than think; and certainly not their young son, Jack Peter, whose diagnosis of Asperger’s doesn’t fully explain his fits of rage — he wounds Holly about four pages in — nor his screaming, feral resistance to leaving the house. Ever.

On the one hand, The Boy Who Drew Monsters is a classic things-that-go-bump-in-the-night horror novel. Characters say glib things readers know they’ll later regret — “No rest for the wicked,” Holly says early on in the book, and, later, laughing, “Are you sure? Skeletons in the closet.” And at another point, a family friend asks Tim, “What’s the matter, dear soul? You look as if you’ve seen a ghost.”

And, indeed, Tim, fulfilling another horror-novel obligation, had earlier left the safety and comfort of his home to chase down a spooky figure who flitted past their windows. The police, of course, are no help, and blame the increasingly dire proceedings on a large white dog.

But even as the book embraces these familiar horror tropes, it also winks at the reader. The policeman, for example, is named Officer Pollock — and if that sounds, well, fishy, the characters think so, too, mistakenly calling him at one point “Officer Haddock,” although they stop short of the place readers surely head, which is to pursue this piscine vein all the way through to “red herring.”

The further into the book readers descend, however — and it is a descent — the less fun and more creepy that wink becomes, and not just because of the arrival of a supremely unsettling character with a strange eye, Mrs. Tiramaku, the local priest’s housekeeper.

The priest, naturally, is useless, as his role in such a book requires, but Mrs. Tiramaku has a sympathetic ear for the at-wit’s-end Holly and seems to understand her troubled son, Jack Peter, like no one else does.

It’s giving away nothing to say that Jack Peter is the eponymous boy who draws monsters — not just one or two, but dozens, hundreds, countless drawings scattered and hidden in every crevice of the house he won’t leave.

It’s also giving away nothing to say that Jack Peter gives away nothing — or, at least, very little — over the course of the novel. Indeed, it’s this opacity that prevents Jack Peter from becoming a caricature — a real, and dangerous risk with a character with mental or physical health issues.

Instead, Donohue lets us see Jack Peter as his parents see him — and, significantly, as his one and only friend, Nick, sees him. The two boys have known each other since birth, but this lifelong friendship has begun to fray and falter as Jack Peter’s behavior becomes increasingly erratic.

Again, it’s a testament to Donohue that we never see Nick upset with Jack Peter because of his Asperger’s (and the book even hedges its bets on that diagnosis), but rather, more touchingly, and more accurately, just with him as a friend.

But nothing is “just” anything in this book, and as the clues piled up — reports of a long-ago nearby shipwreck (named, cleverly, for a port in England famous for wrecks), a human bone emerging from sand on the beach, Mrs. Tiramaku venturing one spooky explanation after another — I became increasingly anxious. Not just because of what the characters were undergoing, but because I could see the pile of pages tucked under my right thumb was disappearing rapidly. How could Donohue possibly resolve everything that he’d put in play in the few pages — then paragraphs and, finally, sentences — that he had remaining?

Honestly, I still can’t say — or rather, won’t say — how, only that he did, and supremely well. So much so that I can sum up my review in four words that came in a conversation with my wife the morning after I finished the book.

“You look terrible,” she said, as we fumbled about for coffee in the early dawn. “Did you sleep well?”

Liam Callanan is author of the novels The Cloud Atlas and All Saints and the forthcoming story collection Listen. He lives in Wisconsin and on the web at www.liamcallanan.com.

A woman with a traumatic past tries to live a circumscribed life.