This Mournable Body: A Novel

A tale of grief and survival set in war-wounded Zimbabwe. 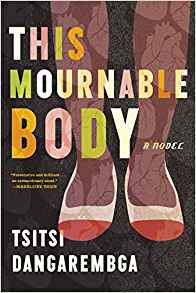 This is a story about Zimbabwe, a country ravaged by war. In the wake of its battle for independence, citizens have been stripped of safety, security, and emotional stability, leaving society as a whole without hope or opportunity.

Uniquely choosing to write in second person, author Tsitsi Dangarembga (Nervous Conditions and The Book of Not) tells the story of Tambu Sigauke, a woman desperately seeking prosperity and status in an environment darkened by death and destruction, by the “fruitless war that brought nothing but false hope and a fresh, more complete variety of discouragement.”

After receiving the advantages of religious boarding schools and university, Tambu gets a respectable position at an advertising agency but soon resigns in rebellion when her Anglo boss takes credit for her ideas. So begins her life’s downward spiral.

Even though Tambu was spared the fighting, the war has marked her being:

“You saw the blood spurt from your sister’s leg during the war, just after you had graduated from your uncle’s mission, and you fled from then on. You kept on fleeing from the sight all through your years at the Young Ladies’ College of the Sacred Heart.”

Without an income, Tambu seeks refuge in various boardinghouses in Harare. She refuses to return to her family’s rural village and the squalor they embrace like well-worn shoes. After one lodging house forces her to leave because she is middle-aged, and after fleeing violence from the house after that, Tambu frantically searches for a job which will pay for a safer place to live. Her guilt at wasting the advantage of formal education inflames her spiral into chaos.

Tambu’s search is rewarded with a teaching position at a nearby school for girls. But the students don’t appreciate the advantages they enjoy:

“Your pupils are all ‘born frees,’ those who hadn’t lived through the tragedy and fear of war. They expect more of the world that you ever dreamed your planet contained. The situation ignites a smouldering resentment, a kind of grudge…”

When Tambu can no longer tolerate her student’s insolence, she thrashes one of them as punishment and then flies into a rage. The slow unraveling of her sanity breaks free, like a raging river demolishing the dam that contains it. “The snakes that hold your womb inside you open their jaws at the mention of war. The contents of your abdomen slide to the ground, as though the snakes let everything loose when their mouths opened. Your womb dissolves to water.”

After months recovering in a psychiatric facility, Tambu must move to the dilapidated home of her forever rival, cousin Nyasha, in the countryside, a place Tambu believes is beneath her. Months later, after a chance meeting with her former supervisor at the ad agency, she secures a position at her former colleague’s eco-friendly African tour company, along with a beautiful home.

Finally able to use her creative skills to better herself and live in a home that befits her station, Tambu believes she has reached her goals. But twinges of madness lurk just beneath the surface, threatening to invade her mind like a stalking hyena. Ants and spiders still crawl just under her skin when despair teases her. Will she be able to keep the respectability she’s craved her entire life, along with her sanity?

This Mournable Body is a tale of desperation and hopelessness which filled me with a hollow sadness, a book that made me stop and consciously appreciate living in a country that offers security, education, and the never-ending hope for a better life.