The Big Fella: Babe Ruth and the World He Created 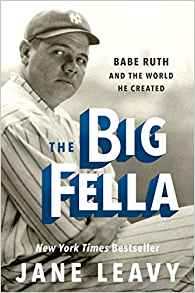 Long before Peyton Manning shilled for Papa John’s or Joe DiMaggio hawked Mr. Coffee, there was the Sultan of Swat, Babe Ruth. It was the Roaring 20s, an age of ballyhoo and flappers, and nobody roared louder than George Herman Ruth, the epitome of personality in the decade after World War I.

While The Big Fella is a lush and engaging biography of one of the most enigmatic and iconic characters of the 20th century, author Jane Leavy knocks this one out of the park by also giving readers an aperture into a transformative time in American history.

Through Ruth’s life, Leavy sketches a portrait of a changing nation marked by the rise of consumerism fueled, in large part, by the advent of electronic mass media and tabloid sports journalism.

The radio, by 1930, had far more than doubled its reach in American households. Not only did it carry sports events to an ever-growing fan base, it also ran commercials selling a host of new products promising the keys to a fulfilling life. Newspapers, too, ran full-page ads promoting everything from automobiles to refrigerators.

At the forefront of all this promotion stood Babe Ruth, the perfect pitchman and the first true American celebrity. And while Leavy is clear about Ruth being the yardstick by which future superstars would be measured, she is equally diligent about shattering myths. Along with debunking any association between the athlete and Baby Ruth candy bars, Leavy proves false the story of him being an orphan. Rather, he hailed from a toxic Baltimore household.

“Parental abandonment would become the defining biographical fact of his life,” writes Leavy. “It is the lens that clarifies the mystery he never would explain.”

Readers should not expect a chronological biography in The Big Fella. Instead, the author frames Ruth’s life through his postseason “barnstorming” — playing in smaller venues, sometimes against the Negro League — which was how many Major Leaguers made extra money.

(Playing against the Negro League was frowned upon by Commissioner of Baseball Kenesaw Mountain Landis, a staunch segregationist. Ruth could not have cared less.)

In the fall of 1927, after belting his then-record 60th homer, Ruth and fellow New York Yankee Lou Gehrig embarked on a three-week barnstorming tour in which the “Bustin’ Babes” challenged the “Larrupin’ Lous.” Ruth’s representative, the ever-savvy Christy Walsh, dubbed the sojourn the “Symphony of Swat.”

Walsh was cagey to a fault. He understood what was transforming the American landscape when it came to heroes and their marketability. Together, Walsh and Ruth built a huge enterprise that capitalized on Ruth’s fame and brought large sums of money to both while giving birth to the modern-day star athlete.

In Omaha, Ruth was photographed with a record-breaking hen, Lady Babe, who laid 173 eggs at the American Milling Company henhouse. An astonished Ruth exclaimed, “Gosh, I wish I could do as well.” Of the event, Leavy writes, “This was the Babe at his best, serving the two masters whose authority he never defied: the need to please and the need to be seen.”

Leavy proves to be a dogged researcher and mines previously untapped sources. Nowhere is this more evident than when she pulls together the portrait of Ruth’s failure as a husband and father. While he initially doted on his daughter Dorothy, from first wife Helen, the child eventually suffers the same fate as her father: abandonment.

Ruth’s first marriage was destroyed by his carousing. But when he married Claire Hodgson, she put the brakes on his reckless behavior, becoming the surrogate parent he never had. Until then, he was the consummate man-boy who lived without rules, whether by bingeing on hot dogs and causing the famous “bellyache heard round the world” or hamming it up for the cameras that Walsh frequently managed to secure.

His antics frustrated the front office of Major League Baseball, but there was not much they could do. Ruth was a cash cow for the sport as it soared in popularity in tandem with him. People flocked from everywhere not necessarily to watch their favorite team, but to watch Ruth bash one over the wall.

The book also explores what was an explosive issue at the time: Ruth’s ancestry. As he climbed the mountain of fame, questions arose about whether he was a “negro.” Noting his broad nose and large lips, some writers suggested he was not white.

Ruth and Walsh sidestepped the question at every turn, though African Americans had an abiding affinity for the Big Fella. Fellow ballplayer Waite Hoyte once claimed, “The guy was an enigma even to those who knew him and played with him.”

Leavy proves Ruth was an enigma to himself, too, and it’s her sharp prose that really propels this biography:

“There isn’t a hint of claustrophobia in his lopsided grin. The Babe, who chafed at every constraint — who according to his daughter Julia couldn’t stand to have his feet tucked beneath the bedcovers — felt safe inside the frame of a frame.”

Ruth’s athletic prowess diminished with age. His fast living caught up with him, and he developed cancer of the throat. But before succumbing to the disease, he’d remained in the big leagues too long, making a farce of himself before eventually becoming a bit of a caricature.

Still, the nation’s great affection for the man endured and endures. Fittingly, the book ends in New York, at Ruth’s grave in Westchester County’s Gate of Heaven Cemetery. It’s there that people from far and wide continue to visit the Bambino to this day, leaving behind tokens of admiration and respect.