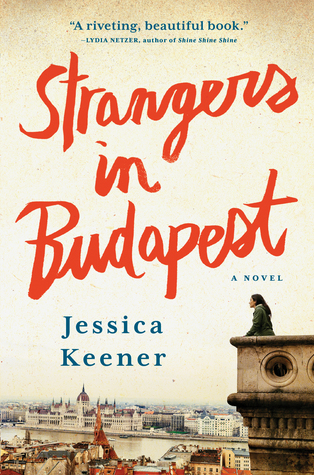 A headstrong character seeking to escape her past. A young family exploring a mysterious and brooding foreign city. A fiercely independent Jewish-American WWII veteran. An accusation of murder that enmeshes a heroine in a “dark and deadly” conflict.

These elements — which form the heart of Strangers in Budapest, Jessica Keener’s ambitious second novel — certainly sound like the ingredients of a gripping, adventurous page-turner. In this case, however, they result in a plot that, despite some high points, struggles to pick up steam, and characters who don’t quite make a lasting impression.

What Keener does accomplish is painting a vivid picture of post-Communist Budapest and the disorientation and heightened sensitivities that often come from being thrust into an unfamiliar culture without direction, a grasp of the language, or a support system.

The city of Budapest itself is, in fact, the novel’s most compelling character, with its contradictions, complicated past, and class struggles. As a leading member of the cast, the city is moody and atmospheric, vacillating between fury and charm and taking the central protagonist — not to mention readers — along for the ride.

Strangers in Budapest centers on Annie Gordon, an American expat who has moved to Budapest with her recently adopted baby, Leo, and her husband, Will. Will harbors aspirations of striking it rich by building telecommunications networks in underdeveloped Eastern Europe. Eight months into their stay, though, he has made little progress moving his business forward, and Annie has made little progress in adjusting to her new life.

It’s at this point that the young family visits an elderly, somewhat ailing gentleman — Edward, the aforementioned WWII vet — on behalf of mutual friends in Massachusetts who are concerned that he is faring poorly in Hungary’s unrelenting heat.

Over time, Annie learns that Edward is in Hungary to escape the grief of his daughter’s untimely death and to seek revenge by tracking down the suspected murderer. Naturally, he wants her help, and Annie, who’d been a social worker in America, is drawn into aiding him. This premise presents the core conflict of the novel and begins to move the story forward, albeit haltingly.

Along the way, we also learn about Annie’s troubled past — a family tragedy, an anxiety-producing adoption — and the myriad reasons she has for her own “escape” to Budapest.

At points, the lengthy passages about the range of motivations behind the move — from supporting her husband’s dreams to learning about herself — feel repetitive and overwrought, although the reader can forgive Annie if he or she attributes the play-back to the heightened emotions of being a foreigner.

We also become intimately familiar with the difficulty Annie has adapting to life in Europe as she eschews the expat community in favor of assimilation. It’s her struggle to adjust to an unwelcoming and gritty city-in-transition that rings most true, perhaps because of the author’s own experience living in Budapest in the 1990s.

Keener’s descriptions of life in a post-Communist world feel very real: from the oppressive, hazy air; to the heart-tugging Roma children selling flowers on the street; to the confusing bureaucracy and secretive, standoffish locals; to the deep frustration and feeling of helplessness that come from being assaulted.

It is in the passages about the city itself that Keener’s talent shines, and it is this writing that keeps the reader engaged as the plot meanders toward a respectable climax. In this way, reading Strangers in Budapest is not unlike being entertained by local sights, sounds, and color while wandering the avenues of an Eastern European city at a leisurely pace.

Ren Meinhart is a foreign policy analyst with the federal government. She lives in Alexandria, VA, with her dog, Huckleberry, and many, many piles of books. See what she’s reading on Instagram at @writinren.