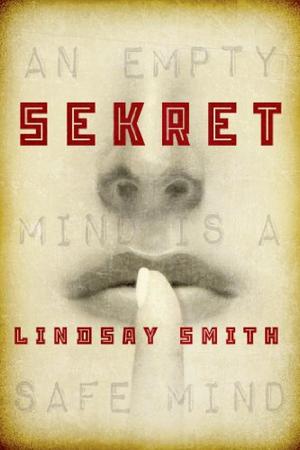 Lindsay Smith has released her debut young adult novel, and it’s no Sekret: There are some people who want more than what’s been given. At least that was my take-away from this Soviet-era, dystopian paranormal thriller.

It’s 1963. Meet 17-year-old Yulia Andreevna Chernina. She is the daughter of two former high-level KGB scientists, now considered political dissidents by the regime after they abandoned their top-secret research. When we meet Yulia, she’s hungry and rumpled, trading black market goods in Moscow to ensure the survival of her mother and highly autistic brother, Zhenya. Yulia’s father has fled, and no one has seen or heard from him. The family is destitute.

And here’s what makes this book different: Yulia is clairvoyant and can assess the recent thoughts and memories of people by touching them. We experience her powers a few pages in, as she taps into the mind of a merchant in order to gain a trade advantage. “In the moment when our skin touches, time shatters apart, like the world is run by a loose watch spring. I plunge into the emptiness, the silence around me, and when I surface I’m in Raisa’s thoughts.”

Soon the KGB catches up to Yulia and forces her to work for them, using her powers to gather intelligence under threat to her family’s safety. Yulia goes to live in a compound and finds out she is not the only one with mind-reading powers: her boss, Major Kruzenko, has skills that outstrip Yulia’s. Though stern and manipulative, Major Kruzenko shows Yulia how to cloak her thoughts with music, so others may not easily read them.

There are many others. Yulia’s bunkmates and colleagues range from reluctant prisoners like her to eager participants. Hunky Sergei has the power of remote viewing. Misha and Masha are twins, powerful seers and sons and daughters of regime who helped capture Yulia. Deep and brooding Valentin is as drawn to Yulia as she is to him, but is he safe? Valentin has the most coveted and dangerous psychic ability of all: he’s a scrubber. He can change thoughts and feelings, altering the reality of his targets. Larissa sees the future, or at least several different possibilities for it, depending upon which choices are made.

Then there is Major Kruzenko’s boss, Colonel Rostov. He is cruel and terrifying. A hard liner obsessed with power, Rostov is also a scrubber: the type that can rub a mind blank. “Something about him makes it hurt to look at him — it’s like looking at sun, too bright to stare at it directly, searing my eyes, making me itch all over. The closer he draws, the more the feeling swells. My stomach churns and there’s this sharp twisting pain in my head.”

Yulia and the other teenagers are trained to track down and identify Russian traitors who are working with the CIA. If they fail, the regime will destroy their minds and throw them away, possibly killing their families along the way. If they succeed, they must face the most terrifying threat of all: Rostov’s CIA counterpart, an American scrubber who can turn a mind into Swiss cheese with one searing look.

Sekret is a page-turner, but it will also compel readers to consider: Why do some people accept pre-ordained lives, while others are driven to push ahead into the unknown? Of Yulia’s two love interests, Sergei sublimates his dreams of being a professional hockey player for a life with the regime. Valentin, on the other hand, cooperates just enough to stay alive, and has already suffered the dire consequences of an escape attempt. Yulia’s struggle to find out who she is, and what she wants will bring her into a necessary alliance with one of the two teens. We can only hope she chooses correctly.

Sekret is born from the human need to know things we cannot know: which door to walk through next, which job to choose, whether to be on the side of principle or survival. Even as the team of psychics learn to harness their powers and work together, the world in all its fate and chance remains one step ahead of their efforts. Every step taken is a step on shaky ground, because there can be no perfect information; even it seems, for psychics. True to its title, secrets will be revealed, and when this happens readers will feel both surprised and well prepped.

Smith has created a fascinating narrative, a melodious blend of eerie what-ifs with real-world shockers like the Cuban Missile Crisis and Kennedy’s assignation. Her references to Orwell, Pushkin, and Dostoyevsky are witty and well placed — perhaps offering up even more than what is required in the young adult category. Through the frightening sequence of events that accompanies Yulia, there remains a strong message of hope that is reflective of the genre, but made the novel feel more American than Russian. But then again, Yulia is not interested in fitting into anyone’s categories.

Dorothy Reno is a DC-based writer who’s been published by Red Tuque Books and is working on a collection of stories called ”The One that Got Away.” She’s looking forward to traveling to Moscow in September, where she plans to photograph her copy of Sekret all over the city.