Valley of Shadows: A Novel

A heavy dose of magical realism keeps the pages turning in this gritty, neo-Western mystery. 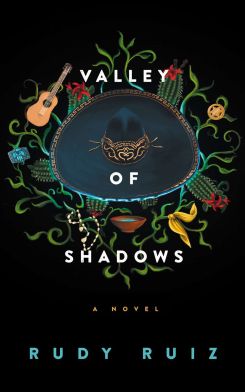 One of the most pleasurable aspects of magical realism is the way the enchanted elements of a story interleave seamlessly with the ordinary. One moment, a Mexican charro is riding through the mountains, searching for lost children; the next, he’s using a charmed sombrero to outsmart his enemies. Despite some plot holes, Rudy Ruiz’s Valley of Shadows does a marvelous job of portraying a world based both in the extraordinary and the everyday.

Solitario Cisneros is a broken man. Having suffered his entire life under “la maldición de Caja Pinta,” a curse leveled by his grieving grandmother at the Cisneros men after she loses her daughter (Solitario’s mother), he believes he is doomed to unhappiness forever. The death of his beloved wife, Luz — a death he believes he is responsible for and could have prevented — has confirmed this belief, and he spends his time exclusively on his ranch, El Escondido, where he can see and visit with Luz’s spirit.

When murders and kidnappings shake the nearby town of Olvido, however, the townspeople seek out Solitario for help. As a former lawman (and one who can commune with the dead), he is in a unique position to assist. While he at first resists becoming involved and begins to head home, the appearance of a murdered child who begs Solitario to find his kidnapped brother and sisters helps sway the man, and he returns to Olvido to confer with Elias, his sargente from the days when they both worked as rurales (Mexican mounted police).

The interactions between Solitario and Elias, while often lighthearted and amusing, form one of the emotional cores of the story. In a flashback, Elias grumbles about being given a burro to ride:

“I didn’t know you’d been reading,” Solitario said as they traveled slowly over the dry mountains beneath the blazing sun…“You’re just upset they didn’t give you a horse.”

“I should have, but it slipped my mind,” Solitario admitted. “I thought I was lucky just to have you sent along with me.”

The bond between the men is ironclad, though it is tested repeatedly by unfolding events.

As Solitario begins to investigate the killings and disappearances, additional tragedies accumulate. Others are murdered in brutal fashion, including the family of one of Solitario’s allies. These occurrences, along with his growing bond with Onawa, an Apache woman with her own supernatural abilities, drive his search for the missing and the murderers. He hopes to save the kidnapped children and bring the perpetrator to justice.

With the inclusion of a town full of characters, unfortunately, the author occasionally loses sight of the narrative’s various threads. During a pivotal confrontation, for example, one figure is completely absent, only to be discovered later as he “sat now on a boulder by the altar, his head cradled in his hands.” The reader is left wondering why such an important person wasn’t more involved in the altercation and was instead treated as an afterthought.

In contrast to such discrepancies, the relationship that develops between Onawa and Solitario is rewarding and well-paced. We discover that they have known each other for some time, as Onawa rescued the grieving man from himself after the death of Luz. Yet Solitario holds himself apart from her, fearing that he will bring la maldición down on Onawa’s head if they grow intimate.

As they draw closer to the heart of the mystery, Solitario and Onawa also draw closer to each other. Yet while the murders are eventually solved in this bright, bold book, there is no real resolution to the men’s relationship, leaving the reader to wonder if they might embark upon more adventures together in the future. This seems like a fitting place to leave them.

Ghosts of the Missing: A Novel