A brilliant collection that playfully reveals the darker shadings of human experience. 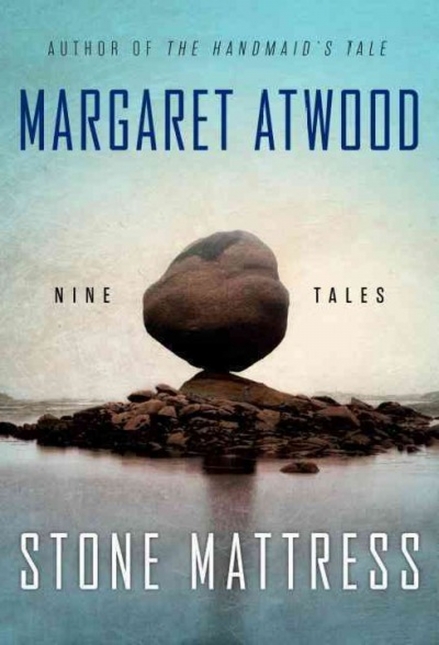 Both new readers of Margaret Atwood and those who know her earlier fiction will welcome her return to the short story genre with her first collection since Moral Disorder in 2006. The nine pieces in this volume of tales — Atwood’s term for fiction that evokes “the world of the folk tale, the wonder tale, and the long-ago teller of tales” rather than “the realm of mundane works and days” — tilt several degrees away from the ordinary, riffing on the fantastic, the macabre, and the grim.

Indeed, since early in her career, Atwood has readily acknowledged that one of her most significant literary influences is Grimms’ fairy tales. The evidence is clear in this volume, with several stories featuring unsettling events and corpses that turn up in unexpected places. “The Freeze-Dried Groom,” offers a riff on the ghoulish Bluebeard tale, a motif that apparently continues to inspire Atwood, judging from the title story in Bluebeard’s Egg and Other Stories (1983).

In the current variation, an unsuspecting antique furniture dealer is shocked to discover in an abandoned storage unit not only the accouterments of an aborted wedding — complete with bridal gown, preserved wedding cake, and flowers — but also the unfortunate groom himself. “The Dead Hand Loves You,” a story-within-a story (the structure is among Atwood’s favorite narrative strategies), is a comic send-up of the Gothic genre, albeit with a gentler ending.

The title story, “Stone Mattress,” is chilling not only because of its literal setting, an Arctic adventure tour by ship, but also because of the spine-tingling events that unfold from the understated opening sentence: “At the outset Verna had not intended to kill anyone.” The unusual title phrase is Atwood’s sardonic term for a geological formation called stromatolite — “a fossilized cushion, formed by layer upon layer of blue-green algae building up into a mound or dome” — that plays a key role in the action.

Three tales in the collection feature linked characters. “Alphinland” introduces us to the so-named computer-graphic fantasy world maintained by Constance Starr, now renowned for a story world she began to create decades before such fantasy sites proliferated in the digital universe.

A different kind of fantasy is part of her non-Alphinland life: Through auditory hallucinations, she hears the voice of her husband, whose recent death she has not fully grieved, offering her guidance and reassurance for necessary actions in the actual world, such as managing during an ice storm. She has more power in Alphinland, where sorcerers with names like Milzreth of the Red Hand flourish just beyond the stone entrance that opens on her computer screen. In Alphinland, Constance also stores disturbing memories in the model of the classic “memory palace” and fashions appropriate punishments for those who have wronged her.

One of the people who have wronged Constance is Gavin, whose overlapping backstory unfolds in “Revenant” and “Dark Lady.” During the 1960s, Gavin and Constance lived together until he two-timed her with another woman. Despite his illusion that he is a latter-day Shakespeare whose “Dark Lady” poems invite comparison with those by the most famous writer in English literature, his prosaic verse comically reveals his utter lack of literary genius. Amusingly, both Constance and the other woman regard themselves as the “Dark Lady” of his poems. After Constance leaves Gavin, she preserves him in Alphinland “in a state of suspended animation” in an oak cask in the winery.

Most of the tales in Stone Mattress feature older characters whose predicaments are set against flashbacks to their youth and the now-quaint social norms of the 1960s and ‘70s. In an unusual gesture, Atwood also nods toward her own previous fiction, revisiting characters from an earlier novel as if their stories had continued to haunt her.

“I Dream of Zenia with the Bright Red Teeth” brings back Roz, Tony, and Charis, close friends in The Robber Bride whose lives were altered years before by the malicious man-snatcher, Zenia. Several decades after the novel’s ending, the three women, who “seem to have thrown away all the maturity and experience and wisdom they’ve collected like Air Miles over their middle years,” ponder the possible return of their nemesis. Together they reach an unexpectedly positive view of Zenia’s true purpose in scrambling their earlier relationships with men.

By contrast, “Torching the Dusties” is easily the grimmest tale in the volume. Wilma, a widow who resides in a high-end assisted living home, Ambrosia Manor, attempts to cope independently despite her near-blindness from macular degeneration. A distressing feature of her condition is Charles Bonnet syndrome, a visual hallucination in which elaborately attired, miniature human figures dance just at the edges of her vision.

Even darker developments exceed Wilma’s private difficulties: Ambrosia Manor is besieged by angry young demonstrators, who are organized under the pointed messages of banners taunting, “Time to Go” and “Our Turn.” Implicitly, the confrontational youths regard the elder residents as parasites who consume scarce resources. Spoiler alert: There is no happy-ever-after ending.

Stone Mattress reveals Margaret Atwood at her most deliciously wicked and inventive. While these tales tend toward darker shadings of human experience, their subtexts are often playful, leavened by the author’s masterful wordplay. One character, for example, regrets that he studied Classics in college because, if he had gone into Design, “he would have made a killing…But…a killing was exactly what he didn’t want to make because to make a killing you had to kill, and he lacked the killer instinct.”

In at least one tale in Stone Mattress, a character does “make a killing,” while other tales offer corpses, hallucinations, fantasies both light and dark, adventures in virtual reality, and risky errands conducted through actual ice. Although the stone mattress will not produce restful dreams, its literary and imaginative pleasures are abundant.

Roberta Rubenstein is a professor of literature at American University, where she teaches courses on modern and contemporary writers, including Margaret Atwood. Her most recent book is Literary Half-Lives: Doris Lessing, Clancy Sigal, and Roman à Clef (Palgrave Macmillan, 2014).