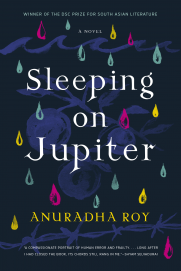 Anuradha Roy’s third novel, Sleeping on Jupiter, is a magnificently crafted, luminous tale set against the backdrop of war and conflict in India. The novel’s stylistic duality addresses its complex subjects by juxtaposing idyllic scenes of stunning imagery with visceral action that has devastating repercussions.

From the opening pages, we know we are at war: “When the pigs were slaughtered for their meat they shrieked with a sound that made my teeth fall off and this was the sound I heard soon after my mother cut the grapefruit, and the men came in with axes…One of the men lifted an axe and brought it down on my father’s forehead.”

Nomi, our child narrator, narrowly escapes her burning home with her mother. They flee into the jungle, and when her mother disappears, Nomi is left alone, cold, and hungry on an unfamiliar riverbank until a group of kind women take her to an ashram.

At this sanctuary, where she and other children orphaned by war are protected and hidden, many adore Guruji, the ashram’s leader, who appears to be someone larger than life, mystical, god-like, and particularly loving toward the young girls under his care.

The ashram is a safe haven, a place of peace. At least, until dark secrets come to light. Through dissonant twists, the novel poses challenging questions that have no easy answers: How do we accept a religious sanctuary that continues the cycle of violence? How can we reconcile the image of a holy man with his destructive acts?

The novel unfolds through various perspectives interspersed with the now-adult Nomi’s flashbacks to her childhood in the ashram. In the dramatic present, 25-year-old Nomi, a filmmaker’s assistant, has found her way back to the fictional town of Jarmuli to revisit her past and fulfill a promise.

Here, at a place that was once home, Nomi finds herself now out of place, both belonging and not belonging. Even her physical presence seems to be at odds with the setting, and her film partner, Suraj, comments on Nomi’s jarring appearance: “Suraj wondered again at the way she spoke, as if she had no sure identity. She looked Indian, even spoke a faltering Hindi, but sounded at times American, at times like a German friend he had.”

In her novel, Roy deftly intermingles several story threads so they collide with each other in Jarmuli: Three old women take a train to visit the city’s temples; Badal, their tour guide, attempts to navigate his relationship with Ragu, a young man who works at a tea shop; and Nomi and Suraj scout the city for an upcoming documentary.

And somehow, unknowingly, these characters find their way to Johnny Toppo’s tea stall, a geographical and emotional center of the story. Roy’s luscious prose wafts Toppo’s fragrant teas out from the page, with rich scents of ginger and cloves, mixed with the faint smell of salt from the nearby sea.

Ironically, it is the buoyant, singing Toppo who most directly represents the consequences of life in Jarmuli: “People like me, our dreams were beaten out of us long ago. I have no time for stars. I just want a patch of ground to sleep on, a bit of cloth to wear and my next meal.”

He purposefully forgets his past traumas so that he may live happily today. “I don’t think too much, or feel too much. If you think too hard you just get a headache and lose your hair. And I don’t have any hair to lose, see?”

A striking quality of Roy’s style is her ability to weave the beauty of place, culture, and people through magnificent prose while drawing back the curtain to reveal the turbulence underneath. Small, seemingly harmless moments become menacing, such as leering men eyeing Nomi when she is alone.

The novel is at once a lyrical display of writing and a commentary on life in India. The holy town of Jarmuli, for all its splendor, is weighed down by its dark past and is a place that residents like Badal dream of escaping: “Jarmuli radiated outward to Asia, the world, the solar system, the universe — it was every child’s incantation in school, and even now, when [Badal] wanted to be out of the reach of his aunt and uncle, he dreamed of living on Jupiter and sleeping under its many moons.”

Be prepared: This is not a feel-good novel. On the contrary, this evocative tale can, at times, be hard to read as it addresses tough subjects such as war, violence, abuse, and child molestation.

With an unflinching eye, Roy crafts her story with elegance and dexterity, and guides the reader past the gilded beauty of the seaside town of Jarmuli. She asks the reader to look hard and closely at those issues the city would rather cover up and forget. Because of all this, Sleeping on Jupiter is not just an important read, but an essential one.

Chelsea Leigh Horne’s work has appeared in the Atlantic, the Rumpus, the Paterson Literary Review, the Buffalo News, Café Americain, and elsewhere. She is the World/Travel editor at Ragazine. She has an MFA in creative writing from American University. Follow her on Twitter at @CL_Horne.