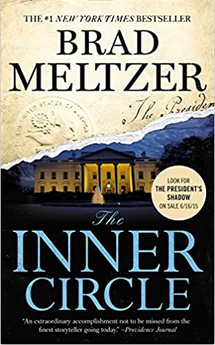 The Inner Circle is the latest entry in the DC-conspiracy thriller sub-genre, which birthed such disappointing films as National Treasure, with its contrived historical clues and forced action.  However, in the hands of the right author, these can be thrilling, engaging and even thoughtful novels. As luck would have it, Brad Meltzer is the right author.

I’ve been a fan of Brad Meltzer since he breathed life back into the Justice League of America comic book. There he was able to transform a large cast of under-developed characters into a team of well-delineated individuals with deeper personalities than decades of stories had given them. He has since moved on to crafting political thrillers that rely on historical conspiracies. This time, the deadly secret relates to the very founding of our country, and the plot Meltzer weaves around that premise twists like a crooked corkscrew.

This novel starts a bit more slowly than Meltzer’s earlier works, but he makes it worth the wait during the setup because his real genius is with characters. In this case, we meet government archivist Beecher White, a quirky but lovable lover of arcane lore who loves to sift through the mysteries hidden in historical documents. He is joined by Clementine Kaye, his middle school crush.  Kaye is the real adventurer here, a strong female character who pushes Beecher to discover his inner hero. Kaye asks Beecher to help her find her missing father, through clues concealed in the National Archives. Meltzer has no trouble making the reader care deeply for this pair well before the real action begins.

The story takes off when they accidentally uncover a hidden book of amazing historical significance – a dictionary that belonged to George Washington. The dictionary contains clues to a high-level conspiracy that the conspirators would kill to protect. This, of course, is the McGuffin, the thing that everyone wants, and once it’s in play the book fully steps into Meltzer’s power zone.  Without giving away too much, notes written in the hidden book reveal chilling truths about how our nation was launched. Coded messages and imaginative puzzles are Meltzer’s storyline strengths, and this book is drenched in the stuff. And while I am no history buff, Meltzer manages to make all this historical info fascinating.

The big questions here are the stuff of paranoid fantasies. Did the current president know about the hidden dictionary?  Did he know about this 200-year-old conspiracy? How high up the federal ladder are the killers pursuing our heroes in order to bury this horrible secret? The novel keeps us guessing about who the bad guys actually are.

If this isn’t your thing, the story might feel a little too convoluted and confusing. This is my kind of story, and Meltzer still managed to surprise me with the ending. The Inner Circle gets off to a slow start for a political thriller, but once it picks up speed it rushes to a thoroughly satisfying conclusion. Fans of Meltzer and political thrillers in general will not be disappointed. I heartily recommend this book, which I hope will be the strong start of a dynamite series.

Austin S. Camacho is the author of four detective novels in the Hannibal Jones series: Blood and Bone, Collateral Damage, The Troubleshooter, and Damaged. Camacho is active in several writers’ organizations and teaches writing at Anne Arundel Community College.