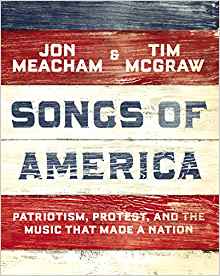 A collaboration involving two elite performers who have earned their spurs in different fields is a risky proposition. Rarely do diverse talents mesh in a way that produces the desired result of a whole greater than the sum of its parts.

Thank goodness Random House recently took that risk in its decision to publish Songs of America: Patriotism, Protest, and the Music that Made a Nation, a Fourth of July birthday present to the country co-authored by Pulitzer Prize-winning historian Jon Meacham and Grammy Award-winning singer Tim McGraw.

The two men have the requisite chemistry needed to pull off this venture because they are friendly neighbors in Nashville. Last year, on a summer afternoon soon after the release of Meacham’s bestseller The Soul of America, they were speaking in Meacham’s yard, when all of a sudden, McGraw had an idea for a joint project: “Why not explore America’s soul through its music?” Meacham agreed, and they succeeded in completing it in less than a year.

They begin their narrative and commentary early on, when tension first arose between England and the 13 colonies. From there, they recount the next two-and-a-half-century journey over our history’s rocky road. Yes, over time, high-minded and low-minded people with influence have had conflicting views. Meacham explains how these differences have impacted songs:

“One way to gain a fuller understanding of our confounding nation is to explore the music of patriotism, which is also, inevitably, the music of protest. To us, patriotism celebrates and commemorates; protest critiques and corrects. The two are inextricably intertwined and are as vital to each other as wings to a bird, for the nation cannot soar without both.”

Given that yin and yang, not surprisingly, early colonists upset by British taxation embraced John Dickinson’s “The Liberty Song,” while Loyalists not yet ready for revolution sang about “The Rebels,” whom they called “Yankees all in the wrong.”

Once war came, General George Washington knew how important music would be for maintaining spirit among his troops, noting that, “Nothing is more agreeable, and ornamental, than good music; every officer, for the credit of his corps, should take care to provide it.”

After the American Revolution ended and the new country had a Constitution and its first president, bitter conflict soon arose between the Federalist and Republican parties. Many yearned for unity over partisan discord, and, in April 1798, the desire for national harmony inspired Joseph Hopkinson to write “Hail Columbia,” followed in September 1814 by Francis Scott Key’s “The Star-Spangled Banner,” followed 16 years later by Samuel Francis Smith’s “My Country ‘Tis of Thee.”

The book follows our history and the songs that went with it from one crisis point to the next. In the 19th century, a diverse mixture of tunes sprang from the disastrous dispute over slavery that led to the Civil War, and then from Reconstruction’s driving Southern states to their “Lost Cause” mentality and Jim Crow laws.

In the 20th century, powerful songs with different slants arose out of the Women’s Suffrage Movement; the country’s decision to enter World War I; the Great Depression; the response to Hitler and Pearl Harbor in World War II; the Civil Rights Movement; the Vietnam War; and the attack of 9/11. In the midst of those pivotal events, Irving Berlin recognized, “Songs make history and history makes songs.”

The magic of this book comes not just from Meacham’s artful delivery of the nation’s history in only 230 pages, which presumably came easy to him after The Soul of America. As he writes of each song and how it fit into its era, McGraw elevates the book by offering “his take on selected songs in a series of sidebars.”

Known for his passionate delivery of megahits like “Live Like You Were Dying” and “Humble and Kind,” the singer dissects 37 landmark songs, communicating his full patriotic and moral fervor to deepen readers’ reflections on the tunes.

For example, McGraw explains why “The Battle Hymn of the Republic” makes his juices flow: “A big part of its power is how it links the human and the divine, the small and the large, the particular and the universal, told from the perspective of a soldier for justice.”

After Meacham reveals the unusual history behind the creation of “Dixie” (written by a white man to be performed by white people in blackface minstrel shows), McGraw says the song “requires us to think about it fully, not partially — because it’s “a part of a past that’s troubling, tragic, and not even past.”

Of the song that resonated throughout the Great Depression, “Brother, Can You Spare a Dime,” McGraw speaks his anguish: “The thought of anyone who wants to work and provide for his family but can’t absolutely tears me up. And it should tear all of us up.”

His thoughts on the anthem that fueled the Civil Rights Movement explain its power:

“The brilliance of ‘We Shall Overcome’ lies in its capacity for many different voices to join in — a fitting metaphor if there ever was one. A folk song, it has all the hallmarks of great folk music in that it summons the listeners to become singers — it’s music as action.”

What sets off the fireworks in Songs of America beyond Meacham’s tight narrative and McGraw’s engaging commentary are the iconic photographs interspersed throughout. Readers will surely feel lumps in their throats as they see Marian Anderson at the Lincoln Memorial on Easter Sunday 1939; Irving Berlin playing a piano surrounded by American soldiers; naval petty officer Graham Jackson playing “Going Home” on his accordion with tears streaming down his cheeks after FDR’s death; Richard Nixon shaking hands with Elvis Presley; Pete Seeger singing “Waist Deep in the Big Muddy” in front of the nation’s capital; and Jimi Hendrix playing “The Star-Spangled Banner” at Woodstock.

In recent years, controversy has arisen over the skewed perspectives featured in the history textbooks being read in public schools. Songs of America should end that controversy. Going forward, school superintendents should make Jon Meacham and Tim McGraw’s book their new go-to text.

With that type of learning experience, American history would soon return to being many students’ favorite subject during their formative years, thereby providing the necessary grounding about our country’s rich past that will empower them to make more informed decisions about its future.

Talmage Boston is an historian and lawyer in Dallas, Texas, whose most recent book is Cross-Examining History: A Lawyer Gets Answers from the Experts About Our Presidents (Bright Sky Press, 2016).