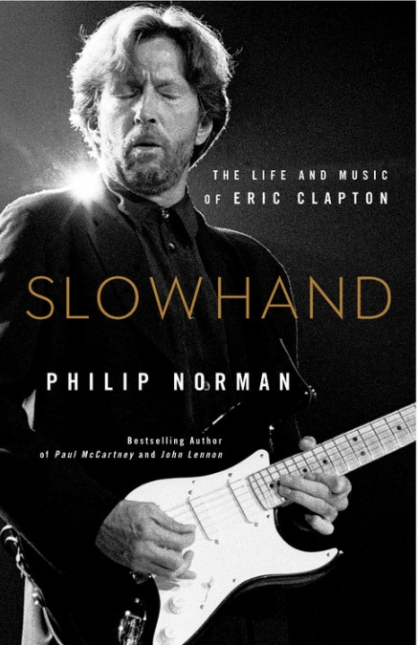 At that point, I didn’t realize I had to have a guitar hero.

The bus bumps into the school parking lot and off I go into the rest of my life. Rock ‘n’ roll and all kinds of music play a big role. I learn to play the guitar. I am in many bands. I wanna be a rock ‘n’ roll star. But I don’t want to be Clapton.

I want to be Keith Richards.

But that’s another story.

So here we are, in this age of rock-star memoirs — some fabulous (Keith’s), some not so much. Here we are with fat bios of now-dignified rock ‘n’ roll elder statesmen and stateswomen, published by the cream of today’s New York publishers.

And here, with Slowhand, we have a fat, beautifully designed, unexpectedly lifeless biography of Mr. Clapton, written by the esteemed Philip Norman. I want it to be magisterial. Masterful. Lordly — in keeping with the “Clapton is God” graffiti of 1966 London. Sadly, it isn’t.

It’s mostly dreary, with a phoned-in feel — make that texted-in feel — like Mr. Norman is transcribing all his terribly detailed Clapton notes. One after the other. And some malignant spell-checker steers him off course into a cliched hell of rock-star excess.

But there it is — it’s mostly ploddingly episodic, and, dare I say, boring. And Philip Norman is the much-acclaimed biographer of Buddy Holly, John Lennon, Elton John, and a classic Beatles biography, Shout!

Recommendation to the reader: Read the artful two opening sections and one middle chapter. And read the final three chapters.

The opening to the prologue:

It’s December 1969, and lunchtime in a busy motorway cafeteria a few miles south of Leeds. Standing in the self-service queue are half a dozen young men whose shoulder-length hair, biblical beards and homespun clothes give them the look of nineteenth century evangelists. Their fellow customers recognize them as rock musicians, pick up their mostly American accents and stare with curiosity or hostility, but no one yet realizes that they include George Harrison.

The crew-boss, “a formidable-looking Yorkshire matriarch,” after a bit, approaches George. “It is you, isn’t it?”

George says, “No.” But George dutifully signs. Clapton is seated with George. Eric has an “apostolic” beard. While he is famous, he’s always changing his look. Nobody recognizes him.

George, nodding at Eric, introduces him to the ladies, saying, “Actually, this is the world’s greatest white guitarist…Bert Weedon.’”

We can see it, feel it, we’re there. Charming.

Still in the prologue, Norman describes early encounters with Clapton:

“He’s articulate far beyond usual rock-star level and better-read than any I’ve met before, save only John Lennon. At the moment, he’s immersed in A.J. Cronin’s Hatter’s Castle, the story of a tyrannical Scottish hat-maker which reaches its climax with the 1879 Tay Bridge railway disaster. He already loves the 1942 film noir version starring Robert Newton and the young James Mason…he tells me about Robert Johnson, the blues musician who for him surpasses all others; a figure likewise credited with genius as a very young man.”

Fabulous. But this sort of thing mostly vanishes.

Next, read the “Fuck! I’m Rich” chapter. It’s Clapton’s Cream in all its late ‘60s glory — psychedelic album covers, a glimpse (but only a glimpse) of the recording of “Disraeli Gears,” their knockout second album:

“Eric’s technique had developed beyond the common syntax of blues and rock. Thanks to Jimi Hendrix, he had discovered the wah-wah pedal, a device that allowed the guitar a vastly greater range of moods and emotions…[giving it] an almost human quality, as if breath were being exhaled and inhaled rather than strings being struck.”

We don’t get it. What we get are endless episodes — Eric on heroin, Eric is drunk. Eric longs for George Harrison’s wife Patti Boyd, Eric gets Patti Boyd, Eric drops Patti Boyd. Eric is an alcoholic through the late 1970s-1980s. Things get out of hand.

But Slowhand, like Clapton himself, finds its way home in the final three chapters. The catalyst is the terrible death of Eric’s young son, Conor, in 1991. After decades of addiction, alcoholism, continuous skirt-chasing, and all-around boorish behavior, Clapton is sober, responsible, gracious, and caring. He says it’s “proof that from all of that mess I could end up as a reasonably behaved human being with a sense of responsibility.”

Today’s Clapton talks about “the moment of perfect communion with his audience,” musical moments that have nothing to do with ego. He says, “It’s not something I could experience on my own…it’s when you get that completely harmonic experience, when everyone is hearing exactly the same thing…you could call it a unity, which is a very spiritual word for me.”

Clapton has found himself. And Slowhand finds its own moment of perfect communion with the reader. Almost worth the price of admission.

Barry Wightman’s first novel, Pepperland, a revolutionary, technology, rock ‘n’ roll love story, was published in 2013, received a starred review on Booklist, and won a Silver IPPY for best fiction from the Independent Publishers Book Awards. He has an MFA from the Vermont College of Fine Arts in Montpelier, VT, and is past fiction editor of Hunger Mountain, a journal of the arts. He also offers professional literary and editing services.