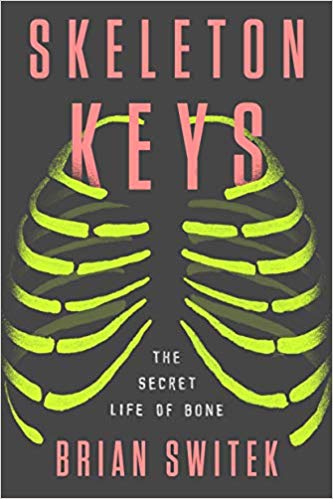 It’s impossible to read a book about bones without thinking of one’s own mortality. Bones may not be the flashiest, sexiest parts of our existence, but they do what no other organ or system can — they hold our very beings together. This is the message Brian Switek seeks to convey in Skeleton Keys: The Secret Life of Bone. He succeeds, with very few exceptions.

At first glance, the scope of Switek’s premise seems ambitious. He begins his tale — part history, part narrative, with a dash of necessary conjecture — with an overview of the time before bone existed, moving at a comfortable speed to the era of Pikaia gracilens, a “wee beastie” found at a famous fossil site in British Columbia called the Burgess Shale.

For what is the first of many times, Switek does something challenging with ease and grace: He makes us care about a tiny protovertebrate with whom we ostensibly have nothing in common, but to whom we owe everything. In the hands of a fusty old professor, Pikaia would have sounded dull; in Switek’s, it embodies the plucky beginning of the rise of the vertebrates, a true underdog tale.

Switek manages to condense millions of years of nonhuman history into the next chapter, which asks us to imagine “giant dragonflies with two-foot-wide wingspans” and Dunkleosteus, “a predator the size of a great white shark with shearlike jaws that resembled the world’s largest pair of staple removers.”

The reader feels safe in the author’s hands. We trust that he will tell us all we need to know to understand the story. As Switek transfers his attention almost seamlessly to prehistoric humans, we find that trust is well-placed.

There are moments when the author, a proponent of careful thought regarding social issues, veers off track, with varying degrees of success. During his discussion of bones found in the La Brea Tar Pits of Los Angeles, for instance, he meanders through a philosophical debate about how we identify sex and gender using skeletons.

His suggestion that “we must always be aware of our tendency to fit old skeletons into our present systems of ideas and values” is valid, but when he furthers his claim by saying he doesn’t feel comfortable assigning biological sex based on bones, the reader is left wondering: How, then, does one assign it?

These insights into Switek’s mind are valuable, though perhaps he would have done better to grant them their own separate chapter and address them all together. Overall, however, it seems better to have a writer who thinks too much about such subjects than too little.

Skeleton Keys truly begins to flourish the closer we get to the present day, perhaps because Switek is delving deeper into topics many of us have heard of but not examined. One such field is phrenology, the 19th-century practice of studying skulls to determine personality traits. (Spoiler alert: It doesn’t work.)

Thankfully, the practice was short-lived, but many phrenologists had scores of skulls at their disposal. Here, again, Switek’s emotional appeal is evident: He asks us to consider the human whose brain once inhabited each skull and to think about how they would want to be treated after death.

This existential question leads to a more practical one: When there is a dispute among who “owns” remains, what is the correct course to follow? Does it depend on the circumstances? The age of the remains? A court of law?

Fortunately, Switek has some answers for us, using the case study of 9,000-year-old bones found near the Columbia River in Washington. The skeleton was such a stunning find that scientists clamored for it. There was just one catch: The age of the bones made it impossible for them to have belonged to anyone other than a Native American, yet some groups went to great lengths to prove the specimen was some other, as-yet-undiscovered race.

Why? Because if it was Native American, it belonged to the Confederated Tribes of the Colville Reservation, who would bury it instead of allowing outsiders to scrutinize it. The scientists couldn’t see past their own ambition to allow that to happen.

The outcome of this surprisingly suspenseful situation is complex and not entirely satisfying. But it is a clever tool for furthering the discussion of race, ownership, and motivations. Referring to another contentious case, Switek writes that British doctors “say there is still much to be learned from [this man’s] skeleton, though what they are principally demonstrating is how cruel we can be to the dead.”

The first line of the last chapter of Skeleton Keys offers one last, and fitting, insight into Switek’s mind: “Sometimes I like to just be still and think about my bones.” This is, indeed, what he does: He sits still, thinks a lot about bones, and writes. As readers, we’re lucky he offers up that last part for the world to see.