Unmask Alice: LSD, Satanic Panic, and the Imposter Behind the World’s Most Notorious Diaries

The gripping tale of fake journals that ignited real terror. 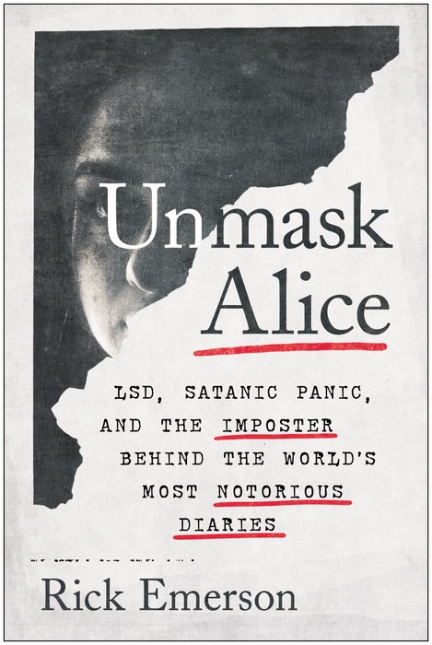 On Oct. 31, 1517, small-town German monk Martin Luther strode up to the castle church in Wittenberg and nailed his 95 Theses to the door, sparking the Reformation. Historians have long viewed this act as one of those seminal moments still shaping the world we shakily inhabit today. While Rick Emerson’s Unmask Alice is admittedly too thick to nail to a door, it carries a similar sense of anger and call for change.

And, okay, while it’s not exactly a Luther-level revelation to learn that politicians can be opportunistic, writers are often hacks, journalists lust after the sensational, publishers crave bestsellers, and overzealous PTA members sometimes spew hypocritical cant, it still makes for a good story.

Using an interesting mix of journalistic and personal tones — bolstered by exhaustive research — Emerson lays out in Unmask Alice a clear and compelling exposé of how Americans suffered from the destructive, shoddy behavior of a vocal minority grappling with social change at a time when women exerted their rights, drug use was prevalent, and sexual mores were loosening.

It sounds like now, but it was actually 50 years ago.

Readers of a certain age will remember the tsunami of parental panic created by Go Ask Alice, the “diary” of a real-life teenage girl published in 1971 and further seared into our collective consciousness via a horrible made-for-TV movie a few years later starring Andy Griffith and William Shatner. (The mind reels.)

The diary and movie told the story of a white, middle-class teen who was overtaken by drugs and eventually killed herself in confusion and despair. The poignant emotional saga was seized upon by high-powered people ranging from Art Linkletter (who was seeking to understand his own daughter’s apparent suicide) to President Richard Nixon, who leveraged it to fuel his so-called War on Drugs.

There was just one problem: The diary was a hoax. Writes Emerson:

“If you paid close attention, there were things that didn’t make sense. Like the timeline: after her first LSD trip, Alice takes amphetamines, tranquilizers, pain pills, and even shoots up — and only then tries marijuana. And do mental wards really allow injured, delusional patients to keep a diary (much less a pen) within reach?...There was also pure nonsense. Go Ask Alice put every drug — LSD, marijuana, heroin, speed — into one lethal basket, with no attempt at nuance.”

In fact, the diary had been penned not by a troubled girl but by a middle-aged, wannabe author named Beatrice Sparks. Although partly an account of Sparks’ nefariousness, Unmask Alice is just as much a biting commentary on the legions of others who either knew the book was a fraud or else had their suspicions but didn’t care to investigate as long as its incendiary content advanced their own agendas.

Incredibly, Sparks published another fraudulent diary later in the decade, Jay’s Journal, which set off a different panic across the nation: this time, over satanic cults supposedly preying on our vulnerable youth. While it’s hard to find something that doesn’t exist, it’s easy to leverage the search for that “something” into a straw man to use to one’s own cynical, greedy advantage. Emerson skillfully demonstrates how so many people did just that in this thorough, engaging, and at times distressing work.

Speaking of distressing, this review was completed shortly after the increasingly far-right U.S. Supreme Court reversed the 50-year legal precedent protecting reproductive freedom, and it’s difficult not to look back in anger and frustration at our inelegant zigzag from 1973’s Roe v. Wade achievement to whatever the hell we’re calling 2022. To paraphrase the philosopher David Byrne, “You may ask yourself, how did we get here?” In Unmask Alice, Rick Emerson gives us a pretty good idea.

Michael Causey, a past president of Washington Independent Writers, worked at the bottom rung of New York publishing in the mid-1980s.