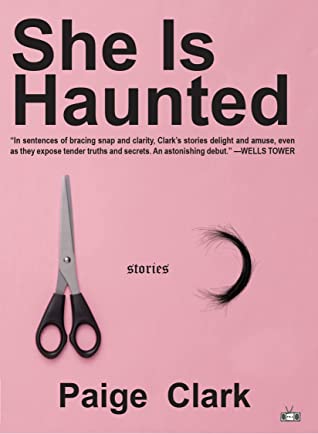 The women are weird right out of the gate in Paige Clark’s debut collection of short stories, She Is Haunted. In “Elisabeth Kübler-Ross,” a woman asks God to take her unborn baby in place of her lover. When God agrees, the woman realizes she could lose her lover without the baby, too, so she then implores God to take her mother instead.

To which God says, “I think she might be more difficult than the baby. I’ll try her out. If I don’t like her, then we’ll talk again.”

God does not appear in the other 17 stories (keep an eye out for the devil, though), but mothers, daughters, and lovers do. The child the woman has cheated God out of is a daughter. And the woman herself, who sacrificed her own mother in order to become a mother, reasons, “Now that she is here, I can forget about God for good.”

This self-perpetuating cycle of contentious mother-daughter relationships is a central theme of She Is Haunted. Many of the characters are emotionally detached due to intergenerational trauma, fiercely concentrating their feelings on one person — usually a significant other — while alienating everyone else. Despite this similarity in subject matter, no two stories are alike; each is bizarre in its own delicious way.

Reflecting author Clark’s transnational identity (she is described on the book’s back cover as a Chinese/American/Australian fiction writer from Los Angeles who lives in Melbourne), the stories span the globe, with many taking place in the U.S., particularly California, and Australia.

The Australia of “Gwendolyn Wakes” is a speculative one in which a Department of Recovery, where Gwendolyn works, evaluates people’s broken relationships and prescribes a plan, such as “a standard application, 30 DNC/SIR (Do Not Contact/Self Improvement Regime)” or “30TR/VS. Thirty Days to Terminate Relationship/Violence Suspected.” With blacked-out last names and the bracketed censoring of sensitive subjects (“[insert sex act here]”), the author further teases the sense of dislocation in this tale of a bureaucrat who gets a taste of her own medicine.

In the stories where race is identified, many of the narrators are ethnically Asian or have a close connection with an Asian (in the ones where race isn’t mentioned, the presumption is the narrator is Asian). Gwendolyn is “exceptionally attractive, meaning incredibly Anglo-Saxon,” but the boyfriend she eventually seeks to recover is Chinese Australian. In “What We Deserve,” Rosa is white (or white-passing), with a Chinese American son-in-law whom she expresses affection for by screwing up her face to look like a “Chinaman” every time she sees him, much to the exasperation of her daughter.

Many of the narrators are named some form of Elisabeth. Lizzy in “Safety Triangle” finds out she is pregnant and wonders, “How can I be a mother when I don’t know how to be a daughter?” In “Cracks,” high school student Elisabeth Loo smokes her mother’s cigarettes so that her mother won’t. Eliza Loo in “Amygdala” has just undergone left frontal cortex removal (in a book full of strange, this story is probably the strangest). In “Snow Angels,” Bethie promises to take care of the stylish coat she borrows from her friend. And Beth goes through the stages of grief in the poignant “Times I’ve Wanted to Be You.”

Tommy in “The Cranes” is the lone male narrator, but he too is emotionally stunted, procrastinating on visiting a childhood friend in the hospital before finding out he’s waited too long. Though the ending of this story leaves some room for ambiguity, it’s uncharacteristically pat. Most of the tales conclude abruptly, without a shiny, tidy bow.

Clark’s prose is incisive yet playful, and she has an unerring eye for the contradictions and eccentricities of human nature, especially our innate need to connect and the many ways we fail to do so. Her characters have a strong urge to love despite the frequent obstacles they put in their own way. The boundaries she crosses are not just geographical and cultural: Her love stories are shadowed by grief, and her grief stories are brightened with love.

Throughout, the cycle of trauma is real and self-perpetuating, as illustrated by the eerie titular story, “She Is Haunted,” which tells alternating tales of a mother and daughter in the afterlife. Looking back from the safety of Hell, the mother thinks, “I tried my best and it wasn’t good enough. But what could I have done differently?”

Yes, the women here are weird. They are also strong, and they are survivors. They get it from their mothers.