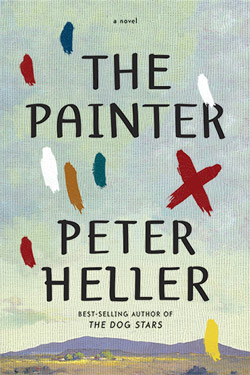 My enemies might think of me as a self-promoter with more ambition than talent. A disappointing friend and colleague. A morally-questionable hurter of feelings. An unfunny, insensitive, none-too-bright, all-around Bad Person. This is to say, I am somebody’s anti-hero. And so are you.

And so is Jim Stegner, in Peter Heller’s second novel, The Painter. Stegner is a once jailed, twice divorced artist who fishes often and lives quietly between Colorado and New Mexico. His quirkily shamanic paintings come to acclaim after he crushes the hand of a radio host during a live interview. Devout in his recovery from alcoholism, Stegner is somewhat of a womanizer, and with James Salter-like swagger he dives into an Ocean of Women, some of whom (feminists beware!) burst forth like gunfire and fade just as fast. His leading lady is spirited, though lacking in an agenda of her own. But his connections with women are genuine, and varied, even long lasting. One night, when a rage born from unspeakable loss takes over, Stegner kills a local criminal in cold blood. For the rest of the story, he hides in plain sight from the police, from those who wish to exact revenge, but most of all, from his own conscience.

With its numerous zen-like fishing scenes, The Painter is a dark relative of David James Duncan’s The River Why. That is, until Heller pulls an impressive and cocky literary throw-down by explicitly calling out themes from Moby-Dick and The Rime of the Ancient Mariner (the madman’s quest for revenge, a psychological burden), ostensibly communicating his intention to create a great American classic. Rilke’s poetry appears seamlessly throughout; Neruda, T.S. Eliot, and Salinger receive mention throughout.

The novel’s central theme of murder and guilt echoes Dostoyevsky’s Crime and Punishment, and Stegner’s almost mystical relationship with his paintings could be a remote allusion to Dorian Gray. But the tone is vividly American − a Wild West valentine, with throbbing dialogue that is sparse and colloquial. This is a novel for manly men at large: “My dick was as surprised as I was,” and a recurring refrain, “fuck the fuckers.” Stegner is often distracted and comforted by his girlfriend’s body: “her breasts did that thing where they dominated the universe for a minute.”

In terms of wisdom, The Painter ranges from obvious, “one of the problems…of being somewhat famous is that…hardly anybody you are connected to really knows you,” to hilarious, “Hey, don’t leave a goddamn mess for your friends…Use the gun, stand in a pond,” and serious, “I shook her hand warmly and realized that I could not save everyone. I could not, it seemed, save anyone…”

The book is at its strongest while musing, or offering what our anti-hero would call “the Bootstrap Truth” on life and art: “They come to the painting with everything they know and feel and love, and all the things they don’t know, and some of the things they hope, and they are honest about them all and put them on the canvas.”

Deep flaws aside, Stegner is a likable character and the book stands out for having an anti-hero who introspects, and ultimately, identifies himself as the bad guy. Not every scene moves the narrative forward, especially the many fishing trips, though they offer up important backstory and meditative breaks from plot anxiety.

In the course of the novel, Stegner’s foils (the police, the men who want him dead) are complex and sympathetic enough that traditional roles of protagonist and antagonist become subversively blurred. In fact, the only character who is portrayed as categorically immoral is Stegner’s art dealer, who exploits several tragedies to command higher prices for Stegner’s paintings. By the book’s end, readers should have an appreciation for the grey zones between good and evil and if they are wise, might be inclined to turn that pointed finger around and admit that we all play the outlaw in someone’s life.

Stegner admits to feeling “cracked open” throughout the novel, but the only time I felt cracked open was when he shamed his daughter for confiding to him about the trials of being a teenager. Owing to the lack of emotional weight (despite weighty emotional themes), and because Stegner seems just shy of being real, the novel’s triumphs are slightly more philosophical than literary. But the story of Jim Stegner is as deep and readable as it is exciting. Even Heller’s enemies (if he has any) will have to admit that The Painter is tremendously ambitious, a well-landed punch on the side of rugged masculinity.

Dorothy Reno is a DC-based writer who’s been published by Red Tuque Books and is working on a collection of stories called The One that Got Away. She hopes to have her collection published sometime before or after she dies.

A series of conversations reveal uncomfortable truths about the myriad reasons why relationships fail.