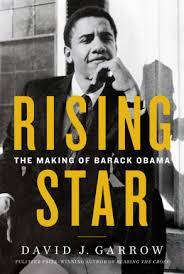 On March 28, 1980, Wisconsin Steel of South Chicago, with zero prior notice, sent its workforce home and locked its gates. In many cases, the people who had labored at the mill their entire working lives — having built a comfortable middle-class life without benefit of a college or even high school degree — never found another job.

That opening sets the stage to explain how the Columbia University graduate ended up in Chicago as a community organizer. Before we get there, though, Garrow pulls back into the fascinating pre-history of Obama’s parentage, and then moves forward through his upbringing, education, and gradual migration into politics.

Perhaps there is little here that is entirely new or revelatory; after all, there truly are no skeletons in the Obama closet. Certainly, the voting public heard and read endless reporting on Obama’s background and life story — some of which was even true — during his candidacy and two terms as president, but Garrow goes much deeper, provides far more detail, and connects all the disparate pieces in the detailed step-by-step of what went into, as his subtitle says, The Making of Barack Obama.

At 1,076 pages of narrative and 270 more of notes, this firehose of primary research will be foundational to future Obama biographers, but it is hardly the book for casual readers. Like many painstakingly thorough biographers, Garrow appears to have included any fact he uncovered, however tangential it might be. Nonetheless, it is a surprisingly compelling read and should appeal to political junkies and insiders.

Oddly, though, after the meticulous detail that carries the reader through a thousand-plus pages to the moment that Obama announces his candidacy for president, the next nine years are summarily dispatched with in just under 50 pages of an epilogue. The contrast in tone, pacing, and detail is jarring, and the book would have ended more coherently had the author, editor, or publisher decided to lop off the rushed afterthought.

Garrow, after spending nearly a decade on this effort, cannot be accused of harboring undue affection for his subject. The author telegraphs his disdain in ways both large and small, and nowhere more so than in that breakneck epilogue, which offers not only a scathing survey of Obama’s failings in office, but also an assessment of “the tragedy of Barack Obama.”

There is much to parse through, but it does sometimes seem that Garrow’s analysis strains in a molehill-to-mountain attempt to illustrate what he sees as Obama’s central lack of character or moral compass.

And yet: Here is a dark-skinned man who was essentially abandoned by his white mother to be raised by his white grandparents in thoroughly multicultural Hawaii, who, as a 10-year-old, met his African father exactly once, and who did not have a single adult black role model, but who entered adulthood in the mainland U.S., where skin color is white society’s sole arbiter of cultural identity.

Given that, how surprising can it be that Obama needed to forge his own identify and essentially will himself into being? Or that, once on a political path, he would carefully curate the image he wished to project and select the pieces of himself to share or to conceal?

More particularly, Obama’s political career was established and honed in what is certainly in the top handful of notoriously corrupt political systems in the U.S., and still he came out on the other side pretty clean.

To be sure, the portrait that emerges of Obama may be disappointing for his staunch supporters, if only in that it shows that he is not a paragon — though it’s hard to imagine what adult could withstand this level of scrutiny and remain admirable. Obama demonstrates himself to be thin-skinned and prickly, distant and aloof, superior and dismissive. He showed a disheartening penchant for leaving behind without a backward glance people who often worked harder than he did to get himself elected to statewide and national office.

The primary issue, though, seems to be his inability to keep to the right side of the point at which political pragmatism shifts from being a refreshingly balanced, bipartisan give-and-take to becoming a spineless or expedient sacrifice of principles.

There are many examples showing Obama’s willingness to thoroughly explore and listen to all sides of any issue, and to cogently argue positions that he was personally against. When the Democrats finally won the Illinois congressional majority while Obama was a state senator, and while he was preparing for his U.S. Senate run, he worked closely with Illinois law enforcement to address their concerns over his bill to videotape all police interrogations in possible capital cases. He didn’t need to, but doing so won the bill universal and enthusiastic support from all its constituencies, and burnished his reputation as a uniting figure.

As he moved up in political visibility, though, he became far more concerned about optics. Again during his run for U.S. Senate, he voted “present” (basically a “no” vote) on a bill he had co-sponsored, because he was attempting to garner an endorsement from the labor union on the losing end of that bill. Both winning and losing unions were furious at him — though eventually he got both endorsements.

More problematically, in that same timeframe, he let go of one of his longtime loyal staffers because she was a headscarf-wearing member of the Nation of Islam and he felt he couldn’t afford that association — and this was long before the Obama-as-Muslim firestorm.

The “tragedy” of Obama, if there is one, perhaps lies in his premature rise to national celebrity when he could have benefited from a longer period of political seasoning. From his days as a community organizer and with each race he ran, Obama said that he was searching for the spot from which he could truly make good, lasting things happen for regular folks.

And now here he is: a young, charismatic former president who never needs to run for office again. Perhaps with that freedom and national platform, he can prove his sincerity by returning to his roots as a community organizer and rallying a newly energized national community to make good, lasting things happen.

Jennifer Bort Yacovissi’s debut novel, Up the Hill to Home, tells the story of four generations of a family in Washington, DC, between the Civil War and the Great Depression. Jenny is a member of PEN/America and the National Book Critics’ Circle, and reviews regularly for both the Independent and the Historical Novels Review of the Historical Novel Society.