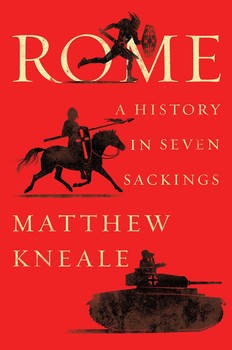 Matthew Kneale’s episodic “biography” of the Eternal City springs from a clever narrative premise. It zooms in on seven key periods in the history of Rome between the fourth century BCE and the first half of the 20th.

Why these historical moments? In Kneale’s view, they’re inflection points when Rome faced severe threats to its existence, governance, or social fabric. Marvelously telescopic, the author’s selective coverage results in a sweeping and very readable survey of the city’s history.

The author’s entry point, his first sack, occurs in the early years of the republic, when the city undergoes a “drubbing” by the Gauls in 387 BCE. Roman leadership’s decision to buy off the Celtic marauders averts wholesale disaster, and they withdraw to their wild Italian domains.

Here, as in each of his seven segments, the author blends in an engaging backstory to acquaint the reader with conditions on the ground at the time. He describes the city’s geographic footprint, living conditions, political and social circumstances, and prevailing architectural and building styles, plus its civic infrastructure, including practices for transportation, water supply, and sanitation.

All these benchmarks, fueled by the author’s thorough research and skillful writing, add depth and color to a stop-and-start narrative that spans nearly 2,500 years.

For his second segment — sackings being in short supply during the Classical Era — the author fast-forwards to the fifth century of the Christian era. Rome is now threatened by Gothic forces tens of thousands strong. At first bribed successfully (as the Celts were 800 years before), the marauders later reverse themselves and sweep through the city. But because these Goths had converted to Christianity in the wake of their defeat by Constantine a half-century earlier, they largely spare the many churches inside the city walls.

Next up: the Ostrogoths in 537 AD. Here we find the Roman garrison, its emperor based in the remote East, lined up against an invading force from a tribe ruled by a woman. This is a time, author Kneale reveals in his background overview, when:

“…Public bathing was becoming ideologically unfashionable. In Christian eyes water was for drinking, not bathing, while it was certainly not for pleasure bathing, which smacked of licentiousness.”

For some, this may be a startling revelation, given the craze among classical-age Romans for grand bathing edifices, often architectural monuments rivaling pagan temples in size and prestige.

Kneale next transports us to the 11th century, the age of mounted knights and pilgrimages, when Rome, long a destination of the devout, was challenged by competing pilgrimage sites, notably Compostela in Spain and Jerusalem itself.

This is the epoch when German king and would-be Holy Roman emperor Henry IV famously (at least for those of us educated in parochial schools) made his barefoot trek to Rome to seek the pope’s forgiveness for an intemperate misstep. It’s also the period, according to our author, when “it became acceptable — even commonplace — for popes to be murdered.”

This factoid never made it into our curriculum.

Kneale’s next stop: “the sixteenth century’s 9/11,” when Spanish-German imperial forces overrun and loot the city mercilessly, slaughtering thousands. The backdrop to this sack — although not necessarily an entirely causal one — was the pope’s attempt, a few years earlier, to finance the massively expensive rebuilding of St. Peter’s by peddling indulgences (effectively get-out-of-jail-free passes redeemable in the murky antechambers of Purgatory). This papal miscalculation was to arouse the back-to-basics wrath of Martin Luther, ultimately sparking the Protestant Reformation.

A related irony attaches here. Around the time of this infamous sack in 1527, English monarch Henry VIII, presumably unknowingly, has sent an envoy to Rome seeking the annulment of his marriage to Katherine of Aragon, a likely slam-dunk given past papal practice.

Katherine, however, is the aunt of Charles V, the Spanish ruler whose forces have perpetrated the sack and are still clanking their swords against their breastplates outside the city gates. The pope demurs, for obvious reasons, throwing Henry VIII into high dudgeon. This eventually precipitates the English branch of the reformation.

Fade up now on the mid-19th century, when French forces allied with the papacy dominate the city. By this era, Rome is a “city of domes,” with some six-dozen churches within its walls. And now, too, there’s a persistent whiff of officious morality in the air. The pope himself, it’s said, occasionally dons plain clothes to scour the streets for licentious miscreants.

Kneale’s final segment spans the election of Mussolini in 1922 to the retreat of the Nazis in the mid-1940s. A moving highlight: the courage of mid-level clergy and everyday Catholics in sheltering Jews from the Nazi roundup. Although, sadly, many Jews disappear, about 85 percent of their numbers in the city survive the war.

Rome: A History in Seven Sackings is written for the general reader but fully provisioned with maps, illustrations, and a detailed index and endnotes. There’s also an extended chapter-by-chapter commentary on bibliographic sources. While this book is not necessarily magisterial, it’s a dandy casual read, ideal for night-table dipping by European history enthusiasts.

This accessible exploration of the science/religion conflict refuses to take sides in the debate.