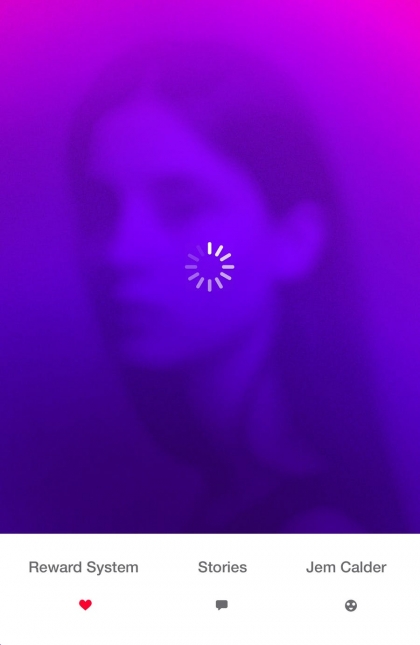 To read Jem Calder’s debut collection, Reward System, is to experience an almost uncomfortable voyeuristic sensation. The six stories, circling tangentially around a failed relationship, resemble lights crackling with electricity — so insightful and incisive, it’s hard to look straight at them.

While the two protagonists, Julia and Nick, are not both present in every tale, the book’s progression highlights their breakup and subsequent friendship by filling in their backstories. When Julia goes on to date her boss, Ellery, at the restaurant where she works, they share a glass of wine together:

Nick’s stream-of-consciousness reflection in the bathroom at a house party is similarly informative:

“Urinating into the sink…I stilled in resistance to the lure of my smartphone. Having caught myself midway through the unconscious hand-to-pocket gesture that cued into the device’s retrieval, I felt I had outsmarted every former version of myself who had failed to perceive and interrupt this behavioural loop.”

Having achieved this interruption, Nick goes on to retrieve his phone and visit the same few social-media sites he’s accustomed to browsing, ostensibly with the idea of reminding himself how bad social media is.

Calder’s writing style — journalistic, spare — allows the reader to observe these moments of self-intimacy without feeling conscious of the intrusion. For instance, the anonymized protagonists in “Distraction from Sadness Is Not the Same Thing as Happiness,” which details the short arc of an online-dating saga, are identified only as “the male user” and “the female user.”

One can imagine the author as wildlife chronologist, documenting the bizarre mating rituals of a newly discovered species:

“The algorithm took into consideration the common interests, venning friendships, and left-to-right swipe-ratio-categorised attractiveness brackets of the two users before providing each with the other’s profile card for approval.”

His genius is in being able to convince us we’re examining someone other than ourselves, despite how much we might see our faces mirrored in his gaze.

Calder’s decision to present each of his stories as a standalone, even as they revolve around facets of Nick’s and Julia’s lives, is another method of “zooming out” and providing the reader with a unique vantage point. If one were not paying close attention to the names that create a common thread weaving throughout each piece, one might miss the connections.

Even absent these threads, however, Reward System is a pleasure to read. Small, descriptive phrases — “Outside, the night was so black it looked navy” — sit side by side with seemingly mundane observations that yet ring true:

“If she ever cut her hair as short as Lena’s, Julia knew, she’d only want it long again after. She understood that all she really wanted was a change.”

Simultaneously, the theme of how technology affects our relationships — including with ourselves — permeates the book. In “Search Engine Optimization,” an IT specialist secretly logs and peruses his colleagues’ online activity during work hours, knowing he is overstepping the bounds of his job.

As Calder writes, “For the first time in human history, no person has to think their own thoughts if they don’t want to. Technology has opened new slots in the world through which instant, substanceless, distractive relief is accessible to the consumer at any moment.”

This feels particularly apt as we move into the third year of a global pandemic which has changed the ways we interact with technology — a subject addressed in the last story, “The Foreseeable,” which takes place during those first disorienting months of covid-19. It’s fascinating to watch Calder’s characters enter the pandemic just as we did so many months ago, and his portrayal feels apt. His whole collection, in fact, is a worthwhile read for anyone looking for thoughtful commentary on human relationships and technology’s impact on them.