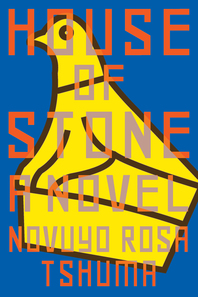 At some point in our cultural journey, history got a bad reputation. History is dusty, stale, and distant, they say. History happened before, and it’s not as vital or pulsing as what happens now.

The grasping narrator of Novuyo Rosa Tshuma’s House of Stone would disagree, violently.

Zamani is not an historian, but a young man living in the back yard of strangers in contemporary Zimbabwe. He hasn’t lived through his nation’s formative events, yet he is eager to recover them and find a place for himself in those stories.

In fact, he is so desperate to learn these stories, “hi-story” he calls it, that he goes to extreme lengths to ingratiate himself into the lives of the strangers he rents a room from. Zamani wheedles, manipulates, drugs, and even facilitates assault, all so he can learn the secrets of Abednego and Agnes Mlambo. Because Zamani suspects that their histories, and the history of Zimbabwe, isn’t just a story: It’s a tapestry that he must weave himself into.

And weave he does, whether Abednego and Agnes want him to or not.

Zamani is brutally clear about his intention. In the first two sentences of the book, he states, “I am a man on a mission. A vocation, call it, to remake the past, and a wish to fashion all that has been into being and becoming.” Later he clarifies, “A man of consciousness…makes his own hi-story proper.”

Abednego and Agnes’ beloved teenaged son, Bukhosi, has gone missing, and Zamani might know what has happened to him. But Zamani isn’t interesting in helping his landlords find their vanished child — though he pretends to help in the search to earn their trust. Rather, he wants to learn Abednego’s story, which is the story of Rhodesia’s bloody transformation into Zimbabwe.

Zamani plies Abednego, an erstwhile alcoholic, with whiskey and later more potent inducements, hoping to ease the older man’s stories out of him. Abednego, abraded by grief, reveals a surprising former life, complete with a beautiful first wife and another son, also named Bukhosi.

But like so many who lived through those late colonial and early revolutionary years, tragedy haunts his tale. Eventually, he reveals secrets that intersect, in surprising ways, with Zamani’s own. As Zamani fantasizes about being Abednego’s son and then imagines being the lover of Abednego’s beautiful first wife, he finds real common threads that weave their histories together.

The past, though, is so painful for Abednego that he finally rejects Zamani’s overtures and refuses to keep telling his story. At that point, Zamani shifts his attention to Agnes, who has her own secrets and tragedies. All of which Zamani makes use of.

For all his desire to shape-shift, however, Zamani is an intrusive narrator. So much of the book is focused on other people’s stories, yet those tales come to the reader through the filter of Zamani’s summary. Abednego’s youthful drama is blurred and insulated by the dirty glass of Zamani’s telling. Agnes’s stories are a little more intense in places, but still dimmed by the distance from the reader.

Zamani’s best accomplishment is to wheedle himself at least partway into the reader’s sympathies. He suffered his own tragedies, and his yearning to be loved is both pathetic and familiar.

More importantly, his conviction in the immediacy of the past makes for an intellectually interesting read. He often sparks into passionate monologues on the importance of history, like:

“What the hell is hi-story? Things that didn’t belong to anyone and belonged to everyone being claimed by someone, demarcations, lineages, and hi-stories being created abracadabra and made real in the mind.”

But history, like prodigal sons, has a way of returning. Stories from the past are the roads that brought us to the present, and it is impossible to obliterate those trails. They can be forgotten, misconstrued, or hidden, but we cannot step off the tracks made by our own feet.

And for all his passion for the past, Zamani ultimately contradicts himself. He tries to be “a new creation who has broken free of the vicissitudes of the past and who can thus say of it, ‘I am the one who willed the past’ and not, ‘It is the past, that tempestuous bastard, that has willed me.’”

Though he thinks he succeeds, the reader knows better. Zamani may deceive himself, but he has proven through the force of Zimbabwe’s stories that the past cannot disappear.

Carrie Callaghan is an author of historical fiction. Her debut novel, A Light of Her Own, came out in 2018 from Amberjack.