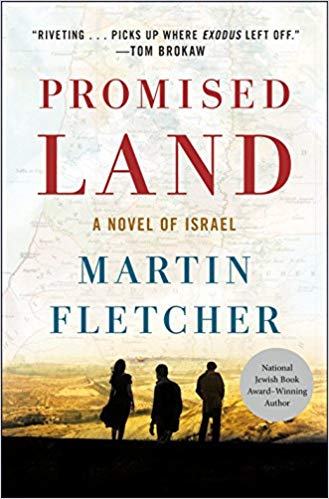 Martin Fletcher’s Promised Land is a literary triumph of near-contemporary historical fiction that is magnetic, surprising, and should be read and enjoyed for decades to come. The scope of the book runs from 1950, shortly after Israel’s establishment as a modern nation, to 1967, a time of its most severe testing.

Fletcher deals in wars: the wars amongst the Jewish citizenly, the wars with Israel’s neighbors, and the wars within an extended family that contains Egyptian Jews exiled (fortunately) to the Jewish state.

And there is the aftermath of war, too, expressed through the sons of Holocaust victims, the elder of whom reached freedom in the United States before settling in Israel, and the younger son — emotionally wounded — who was incarcerated, tortured, and barely escaped with his life.

For all of its impression of compactness, Promised Land is a novel of generations, reminiscent of the Old Testament’s presentation of Jewish families to whom, as the story goes, the Creator conditionally gave the original promised land. What would seem more biblical than warring brothers?

When they were still children, Peter Berg was put on a train that took him west, the initial stage of a journey that led to safety with an American family. He grew up with their children. Arie, then called Aren, was somewhat later put on a train that took him, his parents, and his sisters to the concentration camps. Aren alone survived, but at great cost to his psyche.

Miraculously, the brothers are reunited in 1947. Peter, who had been in the U.S. Army, is already a founding agent of the young CIA. Learning of his brother’s survival, he searches for him in Palestine. Aren Berg is now named Arie ben Nesher, and Peter Berg decides to become Peter Nesher, transferring his allegiance to the cause of Jewish nationhood.

Peter becomes a leader in matters of Israeli security, and Arie becomes a prominent entrepreneur who enjoys showing off his wealth. Along the way, another family enters their lives, a family of Jewish-Egyptian refugees whose glory is their beautiful, intelligent daughter Tamara.

The time markers move along: 1950, 1952, 1953, 1954, 1956, and so on into the 1960s, with the author carefully developing his characters and his portrait of the burgeoning Israeli nation, along with reminders of the constant menace of its nearby Arab-Islamic neighbors.

Egypt, the country with which Tamara’s father continues to identify even after his forced relocation to Israel, becomes a place where hireling German scientists, usually Nazis or Nazi sympathizers, work with the Egyptian government to finish the work of the Third Reich. Peter plays a role in undermining these efforts; some Germans are bought off, threatened, or otherwise persuaded to assist in Israel’s survival and security efforts.

Each of the brothers falls in love with Tamara. Arie is the more aggressive, as he is in most things; Tamara becomes his wife and the mother of his children. But Peter had wooed her and won her heart first. He finds his work as a shadow person, a spy and operative, is at the center of his identity, and that identity is a threat to Tamara or any others who are close to him.

However, Arie’s unfaithfulness and materialism make him a poor match for Tamara. He neglects her to feed his warped sense of importance and entitlement.

Peter marries a wonderful woman named Diana, who is also a security professional. He is a good husband to her in spite of his lingering feelings for Tamara. Diana’s unexpected death creates an opening for Peter to test the waters of a despondent Tamara’s needs. It’s clear to him that Arie doesn’t deserve her, and yet Peter’s love for his brother is genuine and deep.

All of the family’s ups and downs, all of the doings of younger siblings (Tamara’s brother) and children of the principal players (sets of twins) are effectively integrated with the march of events over the 17-year span. Fletcher skillfully handles governmental squabbles, power shifts, wars large and small, and the texture of life under pressure in the Jewish State.

The author is clearly a great admirer of Israel, but he is not blind to issues that burst the bubble of unqualified boosterism. A case in point here is the inclusion of material suggesting that Israel too often provokes the Palestinians into taking hostile, deadly action for the sole purpose of being able to justify an overpowering response. Such a response might have the end goal of resetting borders.

In scope, vividness, and the representation of complex, intertwined forces, Fletcher’s book is a candidate for the highest acclaim: “masterpiece” fits. I’m hoping for a sequel that reaches through the last third of the 20th century. As I did with Leon Uris’ Exodus, I also await the movie.