An engaging natural (and enraging colonial) history from Down Under. 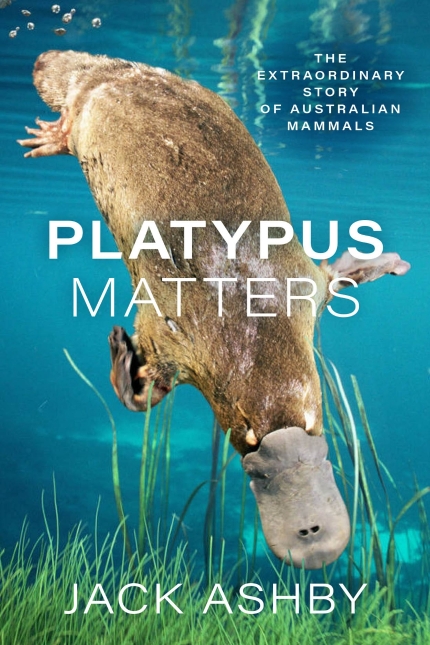 Here’s a book where you’ll want to keep Google close at hand as you read. Otherwise, you’ll constantly be getting up to search for photos of the western barred bandicoot, yellow-footed rock-wallaby, short-beaked echidna, dark-coated eastern quoll, djoongari, quokka, planigale, potoroo, pademelon, bettong (or boodie), and, of course, “the antechinuses and their close relatives the phascogales.”

(To be fair, the book does include photos and sketches, but you’ll want more.)

Truly, I had no idea, which puts me smack in the middle of author Jack Ashby’s target audience for Platypus Matters. He’s pretty sure most of us have no idea of the mind-boggling enormity of mammal species inhabiting Australia — though, given the rapid rate of human-powered extinction, “inhabit” often needs to be in the past tense.

Ashby’s intent with this work is to excise the prejudice that has been baked into the world’s view of Australian animals as being “weird” or “primitive,” because those value judgments degrade our interest in protecting them against further harm and investing in their re-establishment.

(I remember as a child being enthralled by koalas. I wanted one so badly, it practically made me weep. The closest I ever came was receiving a life-size koala for an early birthday that was almost like a taxidermy specimen and covered in actual kangaroo fur. [The older me is terribly sorry to the kangaroo who gave itself so I could tote that poor bear around until it disintegrated.] But part of my fascination with koalas was that they were so different from any other animal at the National Zoo.)

Ashby is an earnest and affable guide, introducing us to his favorite animals with humor and enthusiasm. Foremost of these favorites, as you may have guessed, is the platypus. Of the natural history and European colonial history offered throughout the book, nowhere are the two combined more robustly than in his description of foreign explorers’ first encounter with the never-before-seen creature. (Later, when public hordes clamored to make its acquaintance, handlers discovered how difficult it was to keep the animals alive outside their native habitat. To date, no living platypus has ever made it to England.)

Yet no matter how fascinated the world was with platypuses or other Australian fauna, they were generally considered freaks of nature. The English naturalists who, early on, dominated the field judged monotremes (the platypus and echidna, the only two mammals that lay eggs) and marsupials (the many mammals whose offspring gestate mostly in an external pouch) as primitive, low on the evolutionary branches compared to placental mammals such as humans.

What they failed to understand is that evolution is not hierarchical — though humans love placing themselves as the star atop the mythical evolutionary tree — and that, when a creature is well-adapted to its environs and unpressured by external forces, there’s no evolutionary imperative to select for other traits. (To be sure, nearsightedness, while common today, was not widespread among early humanity.)

Platypuses and echidnas have worked fine for eons in their respective ecological niches, and thus there has been no reason for them to select for, say, a different method of reproduction. But the bill of the platypus is an amazing adaptation to its environment of streams and rivers and its diet of freshwater invertebrates. Because its eyes and nostrils stay closed underwater, its bill has evolved into a sensory marvel able to pick up the barest of electrical impulses signaling food nearby.

There are plenty of placental mammal species in Australia, too, primarily rats and bats. (Dingoes, an introduced species, are not considered endemic.) And marsupials, as Ashby is quick to point out, are not unique to Australia — North America, for one, has its native opossum — but the sheer quantity and variety of marsupials on the continent illustrate that this type of reproductive strategy competes just fine, thank you.

Marsupials range in size from the largest macropod (“big foot”), the iconic kangaroo, down to the tiny long-tailed planigale, a carnivore that weighs a tenth of an ounce but takes down prey much larger than itself. The female Tasmanian devil gives birth to upward of 20 young at a time but only has teats for four; because each joey clamps alone onto a single nipple and remains there until much later in its development, selection for best-adapted devils begins painfully early.

It didn’t matter how well-adapted the thylacine, or Tasmanian tiger, was to its environment; it was hunted to extinction in the early 20th century to protect imported sheep herds (though feral dogs were the greater threat). Ashby describes the negative PR campaign mounted against thylacines, including bounties on the dead, which helped the process along. The last known specimen died in 1936 “of exposure, locked out of the indoor part of its enclosure on a cold Tasmanian late winter’s night.” It’s hard to imagine a better metaphor for man’s maladroit stewardship of his environment through the ages.

Given the history of Britain’s plundering of both the natural and cultural history of its conquests for the sake of its own enlightenment, and of compounding the insult by explaining that history back to the plundered — the British Museum famously still refuses to repatriate the Rosetta Stone to Egypt — it may feel a bit rich to have Ashby, an English zoologist working for a Cambridge museum, write a history of Australia’s mammals. Yet the author is sensitive to that delicate reality, going so far as to put something of a trigger warning for Aboriginal and Torres Strait Islander peoples at the beginning of his book.

And there’s much to be triggered by, no matter who you are. If the extermination of the Tasmanian tiger was abominable, the genocide enacted on Tasmania’s Indigenous population was unspeakably more so.

“As I was writing [the ‘Terra Nullius and Colonialism’] chapter in May 2020,” shares Ashby, “the news broke that the global mining corporation Rio Tinto had, under a legal permit issued by the Western Australian government, used explosives to blow up two of the most important archaeological sites in the country, in order to expand one of their iron ore mines. With evidence of occupation dating as far back as 46,000 years…[these Aboriginal rock shelters were]…40,000 years older than the pyramids at Giza.”

Given our seemingly unwavering commitment to destruction via global warming and environmental predation, Jack Ashby has his work cut out for him in making us care about the natural world’s most unusual inhabitants. Still, his efforts, like those of everyone pushing back against what feels like an unstoppable tide, are crucial to building a coalition that understands the platypus — like the planet sustaining it and us — matters.

Levity meets the brutal reality of war in this personal account of working with wounded warriors.