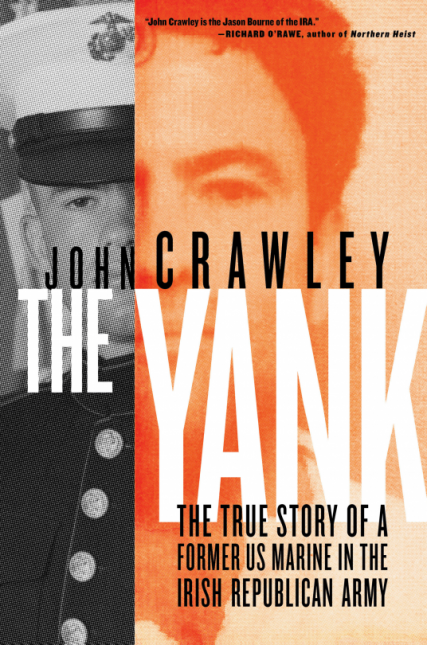 I am more Irish than anything else. As a consequence, I followed with interest the conflict in Ireland between the largely Catholic republicans, who wanted the six counties of Northern Ireland, a British possession, to become part of the independent Republic of Ireland, and the largely Protestant loyalists, who wanted Northern Ireland to remain in the United Kingdom.

“The Troubles” lasted about 30 years, from the late 1960s until 1998, and saw more than 3,500 people killed. Then came the Good Friday Agreement that restored self-government to Northern Ireland on the basis of “power sharing” with the U.K. The pact stipulated that Northern Ireland would remain in the U.K. until a majority of people in both Northern Ireland and the Republic of Ireland wished otherwise.

The yank of the book’s title is the author, John Crawley, born in the U.S. to Irish immigrants who then took him back to Ireland at age 14. Four years later, he returned to America determined to become a master warrior in order to help Ireland free itself from the British yoke. He joined the U.S. Marine Corps and underwent brutal training of every kind he could apply for. On May 29, 1979, Crawley completed his enlistment. The same day, he set out for Ireland. Once there, he volunteered to join the Irish Republican Army (IRA). His fellow volunteers invariably called him “the Yank.”

In the years that followed, the rigorously trained Crawley was repeatedly frustrated by the unevenness of the IRA. Many fighters had little or no training. The weaponry included every kind of firearm known to man. IRA commanders ranged from professional to incompetent, with dedicated amateurs comprising the majority. Worse, the Irish in both Northern Ireland and the Republic of Ireland were divided in their aims: Some wanted Northern Ireland to become part of the republic, others hoped for continued British control, and still others wanted different arrangements altogether.

In mid-1983, Crawley was sent to the U.S. to purchase weapons. He would be able to identify his contact in the Boston area by matching torn halves of a five-dollar bill. Once there, he dealt with notorious crime boss Whitey Bulger, who favored the IRA. Crawley ended up spending the better part of a year in America — traveling to New York, Arizona, and Texas to gather armaments — while making frequent trips back to Ireland.

Then came his two-week sail across the Atlantic in the fishing craft the Valhalla, which was carrying the $250K worth of weapons Crawley had bought. Halfway to Ireland, the boat encountered a hurricane, whose 50-foot waves smashed four of the boat’s seven tempered-glass windows. The Valhalla almost went down, but her knowledgeable crew kept her afloat. Eventually, the Valhalla rendezvoused with another vessel, the Marita Ann, that was meant to take Crawley and his arsenal ashore. But the Marita Ann was intercepted, and Crawley was arrested. He was soon tried, convicted, and sentenced to 10 years in prison.

He used his time in confinement well. Among other things, he completed an Open University degree in political science. Upon release, he returned to work with the IRA and was sent to southeast England to sabotage the electricity grid ringing London. But the plot failed. In 1997, Crawley was again arrested and imprisoned.

Then came the 1998 Good Friday Agreement that ended the Troubles. Crawley was freed from prison on May 22, 2000, under the treaty’s terms. He was 43 years old. Since 18, he had been either a U.S. Marine, a full-time IRA operative, or an inmate. In all that time, he’d never used an ATM, seen a CD player, or spoken on a mobile phone.

Crawley’s story is well told in The Yank. The writing is distinctly British — men are “lads,” a kindness is a “favour,” two weeks is a “fortnight” — and the author avoids commas even in compound sentences. I stumbled across occasional awkward sentences but was impressed by the quality of the prose from a man who is not a writer by trade.

My only real criticism is that Crawley too often fails to clarify many references and unexplained acronyms. Terms like “Tan War,” “Ulsterizaton,” “Orange Order,” “RUC,” and “GIUK” sent me searching online for edification. Typical of what I learned was this definition of an ASU: “An active service unit (ASU; Irish: aonad seirbhíse cogúla) was a Provisional Irish Republican Army ‘IRA’ cell of four to ten members, tasked with carrying out armed attacks.” I suspect The Yank was written primarily for an Irish audience.

On the other hand, Crawley’s dialect lends character and authenticity to his tale. His life makes for an enjoyable, worthwhile study, and I’m a better man for having read about it.

Tom Glenn now has six books and 17 short stories in print. Much of his writing is drawn from his years assisting U.S. forces in combat with signals intelligence, first in Vietnam, later in other places that are still classified. Although a civilian throughout, he often operated under cover as a member of the military unit he was supporting.