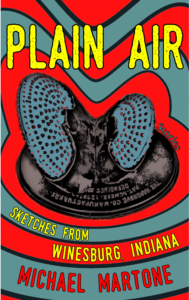 The reader coming to Michael Martone’s work for the first time may be inspired to question the nature of what makes a story — that is, to ask whether all the things we often include in the definition of “short story” (such as plot, character development, setting, and dialogue) are really requisites.

That’s the reaction, or confusion, the author evidently seeks to engender. He’s made a career for 40-plus years as a writer of fiction, poetry, essays, and other literary forms that may not, strictly speaking, have a name, of seeing what he can leave out, what he can get away with, and what tricks he can pull out of his hat.

In Plain Air: Sketches from Winesburg, Indiana, Martone immediately removes the question of whether his new book consists of stories; as its subtitle states, he offers here sketches. Each (except the last) is a page or two long. Most are headed with the name and another identifier of a local narrator or subject: “Susan App, Truancy Secretary”; “Maurice Milkin, Eraser Carver.” Others are titled for businesses (“The Winesburg Moist Towelette Company”), features (“The Snow Fences of Winesburg”), or simply “Things.” Just down the road from Fort Wayne, Martone’s fictional Winesburg is “the epicenter of the flyover country.”

The time is now, probably — one sketch concerns the “Google Street View Camera Operator, Forrest Norton” — but the entire narrative has a bit of a mid-20th-century feel, what with its references to the Fuller Brush Man, aluminum ice-cube trays, and elderly librarian Margaret Wiggs, who, after closing, dims the lights and fondles her old ink-stained due-date stamp.

The danger with stories — sketches — like these (such as the one referencing Winesburg’s annual “Dental Floss Days” festival) is that they can encroach on Lake Wobegon. But readers who used to grind their teeth at the faux folksiness of a certain public-radio curmudgeon need not fear. Martone writes with wit and intelligence (even slyly referencing Keats and Hemingway), and his town and its denizens are endearing.

He does go heavy on wordplay — puns, alliteration, half-rhymes, onomatopoeia, you name it — throughout, the saving grace being that he’s quite good at it. For instance, old Wrigley’s salesman Dick Thomas spends his retirement inspecting the gummy sidewalks of Winesburg like an archaeologist “excavating the black mastic layers of the past’s mastication.” Or, as Juanita the manicurist says at her scene’s close, “I can read the life in the cuticle, the brittle keratin, the nicks and nibbles on the nail. Forget the palms. It’s all in the nails. And it’s not pretty.”

In short, this is a cleverly built, amusing book, with some of the sketches being laugh-out-loud good and well worth the evening or two required to read them all. But the question must be asked: Why “Winesburg”? Sherwood Anderson’s seminal novel-in-stories, Winesburg, Ohio, is still, a century after its publication, astonishing. It’s one of those classics that bears rereading not once but often.

So, it takes a certain amount of guts on Martone’s part to borrow (or, in woke-speak, “appropriate”) the town’s name for his own collection. By doing so, he 1) implies his book has a kinship with Anderson’s, and 2) invites — indeed, demands — a critical comparison between the two.

Yet there’s a wide gulf between the works for various reasons, including this one: Anderson’s characters are “grotesques” — people who embrace a truth which thereby becomes a falsehood, as the author famously suggests. To paint those strange characteristics calls for depth and ambiguity. Martone’s sketches, all written in the same tone and affect, are so brief that there’s no chance to develop any poignant strangeness. His characters are not grotesques but mere eccentrics, given to stories that culminate in punchlines, no more. That’s okay — it’s the technique Martone chose, and it’s part of the flavor and real charm of this work.

In other words, it is no denigration to say that Plain Air’s outlines of Winesburg, Indiana, don’t rise to the sublimity of Anderson’s stories of Winesburg, Ohio. Few books do. (In fact, for the remainder of his career, Anderson himself never again approached the brilliance of his masterpiece.) It’s just that Martone invited the comparison.

Robert Langdon embarks on another quest — this time with a Divine Comedy flavor — to save the world.