The Lie: A Novel

In this lyrical and haunting tale, set in Cornwall, a spiraling tragedy has its roots in the battlefield memories of a WWI survivor. 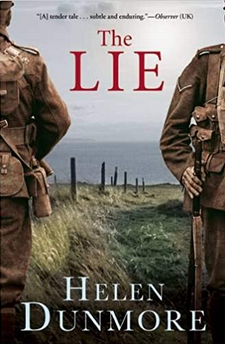 Every war has a name for its after-effects: shell shock, battle fatigue, or, these days, post-traumatic stress disorder. The Lie by Helen Dunmore, an award-winning British author, tells the evocative story of Daniel Branwell, who has returned to his hometown, idyllic Cornwall, in the far west coast of England, after fighting in the brutal trenches and battlefields of France during the First World War.

The story opens as Branwell, who was raised by a widowed mother in poverty and possesses a strong intelligence, a passion for literature and poetry, and an eidetic memory, jolts awake. A specter faces him, the ghost of his beloved childhood friend Frederick, who died on the battlefield. He is “clagged in mud from head to toe … I can smell the mud. You never forget the reek of it. Thick, almost oily, full of shit and rotten flesh, cordite and chloride of lime.”

The war is still very much with Branwell. It’s a living ghost outlined in vividly stark sensory detail.

The Lie presents us with both the harsh lyricism of Branwell’s unfolding suffering and, in  a preamble to most chapters, a flat, clinical excerpt about army rules and regulations on the battlefield. “Confusion is apt to occur in any assault,” notes one of the chapter headings, as Branwell’s mind betrays him, as he relives his frantic hours in no-man’s-land on the battlefields.

According to the acknowledgements, these excerpts are from actual British manuals and pamphlets prepared for soldiers, and they serve to punctuate, a bit heavy-handedly at times, the inhumanity of war. On this centenary of the First World War, Daniel Branwell’s spiraling tragedy serves better to demonstrate the unending emotional pain and scarring of war.

This thought-provoking novel holds several “lies” at the center of The Lie, each one adding to the inner turmoil of Branwell—from the lies he tells Felicia, Frederick’s sister and herself a well-to-do war widow with a baby girl, to the lies he tells the townspeople about the elderly woman whose small cottage he has moved into when he returns from the war.

Even though Branwell works hard to leave the war behind him by restoring the decrepit cottage, planting, and reuniting with Felicia over the memory of Frederick, what he cannot do is share his personal torments, the lies he has told, especially to Felicia, about what happened between him and her brother during the war and on the battlefield.

He appeals directly to the spirit of Frederick, addressing him.

“For a long time after the shell-burst I didn’t hear anything. I felt the rain of earth, not cold but warm, sticky to touch going on and on. It pattered all over me … I cried out your name again and again but it was like crying out in a dream where there is no sound.”

His rambling thoughts veer from past to present in tightly woven first-person snippets of memory, a picture of young man full of promise, dreams, passions—and despair. Yet most of all, it’s the lies Daniel Branwell tells himself as he attempts to rebuild his life that are the most heart-breaking and that bring this novel to its destructive, unsettling end.

As Dunmore so poignantly reveals, young men like Daniel Branwell have no say in the wars we fight, except to keep on fighting, and to then fight its effects long after the battle is done. Regardless of whether or not a war is just, Dunmore asks here if we can ever justify what war does to young soldiers like Daniel Branwell, and she explores the question with deft skill.

Throughout this deeply felt novel, Daniel Branwell may be tormented by the question: Why did his friend die in the war, and why did he, himself, live? Yet, as the epigram to this compelling novel declares from the onset, “If any question why we died/Tell them, because our fathers lied.” This quote is from another master storyteller and poet of the soldierly experience: Rudyard Kipling.

With this novel, Dunmore should rank high among writers like Kipling who explore war, its aftermath, and its lies. At the culmination of The Lie, we are left with a reflection on how war for many soldiers does not end with treaties or returns to bucolic homes and old loves, but continues with the ghosts of those who died on the battlefield always there, haunting them—and us all.