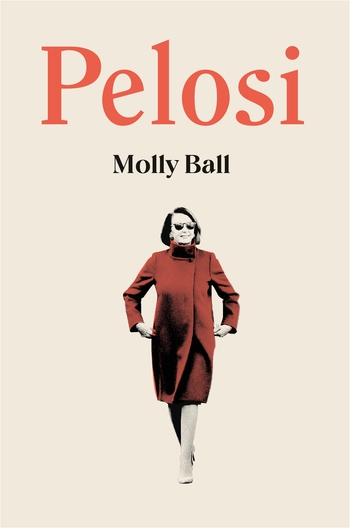 The cover of Pelosi shows its subject in high heels, big sunglasses, and a bright, burnt umber coat, looking movie-star glamorous. The picture captures her leaving a White House meeting with President Trump, where she’s once again left him flatfooted and flabbergasted. It wasn’t the first or last time Speaker of the House Nancy Pelosi would bring the president to heel.

On their first introduction, she’d made herself known as No Nonsense Nancy. Three days after his inauguration, Trump invited her and other congressional leaders to the White House for a reception. The newly elected president, who’d lost the popular vote to Hillary Clinton by almost 3 million votes, confounded his guests by saying, “You know I won the popular vote.”

He’d cobbled together some dubious anecdotes and tried to impress his guests, who knew better. Embarrassed for him, they shifted uncomfortably, and no one said a word. Then the speaker broke the awkward silence.

“That’s not true,” she told the president. “There’s no evidence to support that.”

Under the crystal chandeliers of the White House, Pelosi had spoken up like the child in the Hans Christian Anderson fairytale who shocked the kingdom by telling the naked emperor he wasn’t wearing any clothes.

Nor was this her first presidential tangle. She’d cut her teeth years before on George H.W. Bush shortly after coming to Congress as a representative from California. When the tanks rolled into Tiananmen Square in 1989, crushing Chinese demonstrators demanding reform, Pelosi, who represents one of the largest concentrations of Asian Americans in the U.S., denounced the “butchers of Beijing.”

She proposed legislation to waive student visa requirements to allow pro-democracy students to stay in San Francisco rather than return home to be persecuted. President Bush, once envoy to China, threatened to veto any legislation that might affect international relations.

Pelosi’s bill passed the House and the Senate, but Bush vetoed it. The House overrode his veto, but Bush lobbied the Senate by writing personal notes to Republican wives, telling them to tell their husbands that he promised to issue an executive order that would have the same effect as Pelosi’s legislation but not tie his hands. Bush prevailed by five votes in the Senate.

Months later, with still no executive order, writes author Molly Ball, Pelosi “was furious” that the president thought he could flick off “the little bleeding heart liberal from San Francisco.” Somehow — Ball does not explain how — the Washington Post came into possession of one of Bush’s notes promising the order. The story embarrassed him into acting, and he quickly issued it.

The reader is left to wonder if “the little bleeding heart liberal” had had something to do with how the Post got its story, or if the story was simply serendipitous for Pelosi and her legislative initiative. Such a missing detail is a rounding error for a journalist of Ball’s stature, especially since she had access to Pelosi to write this book, following the two cover stories she’d written on the House speaker for TIME.

Ball reports that she conducted more than 100 interviews for the book, most of which she folded into the narrative without attribution. Such is the dilemma of writing about a powerful person still alive and able to exercise immense influence.

The book is expertly crafted and thoroughly researched, but readers are kept at a remove, being deprived of on-the-record quotes from Pelosi’s family — including her husband, five children, and in-laws — as well as friends, political adversaries, staff, supporters, donors, and colleagues past and present. Did Ball consider asking former Speakers Newt Gingrich or John Boehner to hold forth, or inquire of Tom DeLay, the former Majority Leader, about his political negotiations with Pelosi?

Ball tells us that Madam Speaker doesn’t drink or smoke or say bad words — and, a devout Catholic, she never gossips. She walks the marble floors of the U.S. Capitol in four-inch heels, gets her hair done every morning, and dresses like a woman worth $60 million, a figure that doesn’t include her Georgetown penthouse overlooking the Potomac, the mansion she shares with her husband in San Francisco, or their 16.5-acre vineyard in Napa Valley.

As the most powerful elected woman in the country, Pelosi has become a target for Republicans, and she wears her bull’s eye with pride. Still, it is startling to read that, in 2010, the GOP spent $70 million to air 161,203 ads attacking her — and, in 2018, they spent $100 million more.

Pelosi’s proudest legislative achievement is getting the Affordable Care Act passed for President Obama. When the legislation was floundering, she bolstered him: “You go through the gate. If the gate’s closed, you go over the fence. If the fence is too high, we’ll pole vault in. If that doesn’t work, we’ll parachute in. But we’re going to get health care reform passed for the American people.”

Obama devotees may be dismayed to read that, while he was focused on his own reelection in 2012, he refused to contribute anything to congressional campaign committees, including Speaker Pelosi’s. At the time, she was celebrating 25 years in Congress with a weeklong festival, including lavish fundraisers and concerts with Bono and the Grateful Dead.

All she wanted was a personal appearance from Barack Obama. She pleaded with his campaign strategists, reminding them of all she’d done for the president. They refused, saying her toxic image might hurt him. Finally, she called Obama herself, but he didn’t take her call, and he never called her back.

Makes you understand the wisdom of Harry Truman, who said: “You want a friend in Washington? Get a dog.”

In that instance, Obama barreled down a one-way street marked “me, me, me,” while Pelosi maneuvered multiple lanes marked “you,” “me,” and “us.” Following his re-election, the president came to value the speaker as the best ally he could have to push his legislative agenda. With her, he achieved healthcare, cap-and-trade, and Wall Street reform, plus a massive stimulus package. She was, in her own words, “Mother Loyal.”

Pelosi is less a life story than a legislative treatise and a detailed testament to the laws No Nonsense Nancy has proposed and gotten passed in her more than three decades in Congress. To this day, Obama praises Pelosi as “one of the most effective legislative leaders in history.”