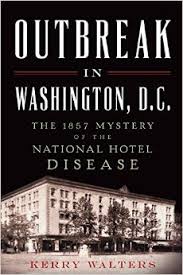 “EBOLA HAS REACHED THE U.S.!” screams the headlines, and a virtual panic ensues on AM radio, the news, and social media. (Never mind that the only people infected were caregivers, and all but one of them recovered.) We’re doomed, some say. It’s a conspiracy to infect our nation, and treasonous for the president to send doctors, nurses, and soldiers to help the most-affected African countries.

The history of disease in America has repeated itself more times than we can count: bird flu, HIV, SARS, smallpox, Spanish influenza, swine flu — and a mysterious ailment that struck the president-elect of the United States in 1857.

It’s the latter, a long-forgotten and fascinating episode, that Kerry Walters has uncovered in his short history, Outbreak in Washington, D.C. President-elect James Buchanan and his party were staying at the prestigious National Hotel in January 1857 when they suddenly came down with diarrhea that lasted for weeks. Hundreds of people were stricken and 30 died.

Walters frames the book — and the disease outbreak — with the sectional divide between North and South over the expansion of slavery. This might at first seem an unlikely tangent, but he quickly shows how the nation’s capital, with its crude infrastructure and sewage-filled canal, was caught in the middle of the debate.

The nation had just elected James Buchanan not because he was the best man, but because he was the best available man, a Northern Democrat and apologist for slavery. He would end up with one of the most ineffective presidencies in American history as the sectional crisis widened. Buchanan stayed at the National Hotel twice in 1857 — and, amazingly, came down with diarrhea both times (the second episode may have simply been a recurrence, rather than a reinfection).

“The suddenness of the disease, its unknown origin and its debilitating and long-lasting symptoms created a near panic for a few weeks,” Walters writes. With few facts on hand, the rumor mill speculated wildly about what caused the outbreak, some saying that the president had been deliberately poisoned, while others blamed it on miasma (putrid smells that were linked to sickness, a theory of disease transmission that was replaced by the germ theory).

Most publications and the scientific community settled on bad vapors as the culprit, but given the political climate, conspiracy theorists ran rampant with paranoid ideas, blaming the “poisoning” on abolitionists, pro-slavery forces, even Jesuits.

“The conspiracy theories that emerged were for the most part speculative and fast and loose with the actual facts of the outbreak,” Walters writes. “At the end of the day, there was no smoking gun, no chain of evidence and no compelling explanation of motive.”

For Walters, the National Hotel outbreak is “yet another example of how eager people are to embrace rumors of conspiracy.” We can look to our own time to see that such theories still run rampant: President Barack Obama is a Muslim (and wasn’t born in the United States, a claim designed to delegitimize his presidency); and Jews working in the World Trade Center were given notice of the pending attack on 9/11 and thus escaped the building. More recently, we’ve witnessed Benghazi and Ebola “conspiracies.”

Walters’ story compares to Steven Johnson’s 2007 The Ghost Map: The Story of London’s Most Terrifying Epidemic -- And How It Changed Science, Cities, and the Modern World, which was set in 1854, just three years before the National Hotel outbreak. In Johnson’s book, London authorities were able to make a stronger case for the culprit: a cholera-infected well, a problem they temporarily resolved by removing the pump handle to prevent new infections.

In Outbreak, Walters concludes that cholera, which may have seeped into the National Hotel from backed-up sewage during a January freeze, was likely the cause of so much sickness, though the evidence is circumstantial.

Outbreak shows off the author’s scholarly laurels, yet the book is written in an approachable tone — like a lengthy magazine article — that is accessible to most readers. Walters’ arguments are well reasoned, and the book is richly detailed with period images, largely from the Library of Congress. Outbreak will satisfy any history lover with a taste for conspiracy, disease, or politics — or all three.

Garrett Peck is the author of six books, most recently Capital Beer: A Heady History of Brewing in Washington, D.C. His forthcoming book, Walt Whitman in Washington, DC.: The Civil War and America’s Great Poet, will be published in March 2015.