An Idea Whose Time Has Come: Two Presidents, Two Parties, and the Battle for the Civil Rights Act of 1964 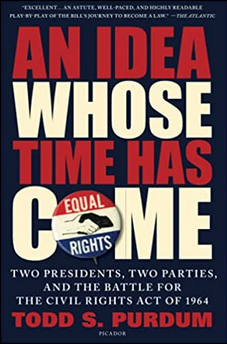 Todd S. Purdum’s book dealing with the tortuous process of passing the landmark Civil Rights Act of 1964 appears to promise that the reader will better understand Otto von Bismarck’s aphorism that “Laws are like sausages, it is better not to see them being made.” By the final page, though, this book shows instead the wisdom of another Bismarck axiom: “Politics is the art of the possible.”

In vividly recounting the story of the law’s passage, Purdum’s book paints a “fly-on-the-wall,” detailed portrait of a different era in legislating. Once, members of Congress on both sides of the political aisle honestly sought to work together to solve the nation’s problems, while still allowing determined opponents to use every legislative-obstruction rule at their disposal to prevent the law from being passed. The game was who could win the key votes. Only a cloture vote, achieved with considerable difficulty at the end of the single “legislative day” of March 30, 1964 — which, because of an exotic Senate parliamentary procedure during a filibuster, remained open for nine weeks — finally ushered this law into being.

Journalist Purdum, of Politico and Vanity Fair, has crafted a first-class narrative based on his extensive research in previously untapped archives, interviews, and transcripts of presidential phone calls, as well as the previously unpublished research of fellow journalist Adam Clymer. The book becomes a page-turning political mystery, filled with revealing anecdotes and short bios of all the key players. As the story unfolds, even knowing that the law passed, readers wonder whether it ever will. The result is a study of the legislative process that is the rival of T.R. Reid’s excellent Congressional Odyssey: The Saga of a Senate Bill, about the otherwise forgotten 1978 Inland Waterways Bill, but with an even more important law at issue.

The narrative is structured in three parts, offering three different lenses for analyzing the Congressional battle: the germination of the bill’s vision in the Kennedy White House, the march through the legislative maze of the House of Representatives, and the epic filibuster battle in the Senate. It opens with the familiar story of President John F. Kennedy’s ambivalence about supporting such a law, balancing his fear of harming his re-election chances against the moral imperative of doing what was right. What seems new in this version, though, is the impact of F.B.I. Director J. Edgar Hoover’s use of his private files on President Kennedy and Reverend King in ways that shaped the pace and direction of the Civil Rights battle. One is left wondering whether, and when, the Civil Rights Act would have been pressed by the Kennedy Administration had it continued past the tragic events of November 22, 1963.

Once the issue reached Congress, the major challenge lay in the basic political math. The American public wanted civil rights reform by a two to one majority, and was blaming Congress for failing to achieve that goal by the same margin. Meanwhile, while the Democrats had roughly two to one majorities in both houses of Congress, in order to win the bill’s supporters would have to navigate their way through an obstacle course of pro-segregationist, southern state Dixiecrats by finding at least three dozen moderate Republicans to vote with them. To do so, the Administration had to protect those who voted for the bill in the House by initially promising that the Senate would not be able to amend the law. Because of another group of southern Dixiecrats, the Senate lacked even a majority in favor of beginning debate on the bill; thus supporters had to find a way to overcome a certain filibuster by mustering 67 votes on cloture to end debate.

Purdum’s riveting narrative of the final process of passing the bill presents some unlikely legislative “Profiles in Courage.” Without the courageous efforts of several Republican lawmakers, who joined the cause because of the historic importance of the issue and the unwavering determination of the bill’s Democratic supporters, passage would not have been possible. The book presents an unforgettable account of former Senate Majority Leader Lyndon Baines Johnson barking at the bill’s supporters, “what have you done to get the bill on the floor of the Senate?” and doing battle with his pro-segregationist mentor, Senator Richard Russell of Georgia. The book also describes the pivotal efforts of younger congressional aides and civil rights supporters behind the scenes, united in groups such as “O’Grady’s Raiders” and “Dirksen’s Bombers,” to keep the bill moving.

The bill was nearly derailed in the Senate by “the easy-going, decentralized leadership style” of Democratic Leader Mike Mansfield. Minnesota’s Hubert H. Humphrey kept the two sides negotiating. Humphrey and Illinois Republican Leader Everett Dirksen crafted a careful strategy of substituting an alternative bill with harmless amendments in order to secure just enough Republican cloture votes to end the filibuster and make final passage possible. As one reads this dramatic account of bipartisanship at its best, one keeps asking, “This law passed, right? How?” Yes, it did, convincingly, and Purdum makes us care about why.

An Idea Whose Time Has Come leaves the reader with a central unstated question: could such a comprehensive Civil Rights bill, perhaps a revised Voting Rights Act after the Roberts Court’s eviscerating Holder v. South Carolina decision, or a comprehensive immigration reform law, be passed now? With the current dysfunctional, politically polarized Congress unwilling and unable to act, the Roberts Court writing that “[t]he way to stop discrimination on the basis of race is to stop discriminating on the basis of race,” and various states trying to turn back the clock in race relations, there is no better time to remind Americans, as this book will, that in a successful democracy, protection of civil rights can and should again become “the art of the possible.”

Bruce Allen Murphy is the Fred Morgan Kirby Professor of Civil Rights at Lafayette College in Easton, Pennsylvania. His biography of Supreme Court Justice Antonin Scalia, SCALIA: A Court of One, will be published by Simon and Schuster in June 2014.

Wild by Design: The Rise of Ecological Restoration

Is there still time to shape a more natural future?