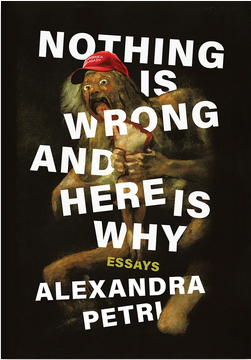 I love reading Alexandra Petri’s column in the Washington Post, irresistibly called “Petri Dishes.” Whatever insanity is going on in the world, whatever the latest outrage to vomit forth from the current administration, I look to her to slice directly to the heart of the absurdity with her signature brand of arched-brow irony — satire suitable for all ages, from Boomers through the full alphabet of generations.

The thing about satire, though — given its constitution of prickly barbs embracing an angry core — is that it typically works best in small doses, which is why Petri’s column is the perfect medium for her message. Creating a collection served up in book form risks reader exhaustion from an overdose of snark. I found I could only appreciate her oeuvre — and keep my blood pressure at safe levels — by taking in a few essays at a time.

As one might imagine from a glance at the cover of Nothing Is Wrong and Here Is Why, which features Goya’s “Saturn Devouring His Son” (“While Also Wearing a MAGA Hat”), the collection spends significant time on the foibles of the Trump administration, starting from the early days when it was still auditioning for the part. Ah, yes, back when so many of us could smugly imagine that we just needed to get through the campaign and it would all be over.

Ha, ha! Instead, we installed the brain trust that, on March 17, 2017, reposted Petri’s column in its newsletter and on the 1600 Daily because it appeared to support the president’s recent budget proposal. Perhaps they read no further than the title, “Trump’s Budget Makes Perfect Sense and Will Fix America, and I Will Tell You Why,” but you’d think someone might’ve spotted a few of the all-caps entries, like, “we will be able to buy lots of GUNS and F-35s and other cool things that go BOOM and POW and PEW PEW PEW.”

As with any of the books that take us back into those days in 2016 and 2017, what’s most striking here is to be reminded of the original cast of characters and to consider, “Wow, there’s a name you don’t hear anymore. I wonder what he’s up to these days.”

A fine example is Petri’s reboot of Beckett’s Waiting for Godot, with Paul Ryan and Reince Priebus in the roles of Vladimir and Estragon, hopelessly waiting for the candidate’s “pivot to presidential” that never comes. The scene features a jarring cameo by then-campaign manager Paul Manafort before he was a convicted felon. (The only reason he’s still vaguely on our radar is because covid-19 recently got him sprung from prison.)

In “A Moderate Speaks: By God, Won’t Someone Else Take a Stand?,” Petri doesn’t need to mention Bob Corker or Jeff Flake, but she channels their self-inflicted impotent outrage as her imagined senator vows to “stand alone against this shameful process that threatens all that I hold dear by issuing a series of scathing statements to reporters on my way to vote for whatever this mystery bill is.”

Mercifully, not every essay focuses on the national nightmare of the current presidency. After all, there’s always the evergreen outrages of racism, misogyny, gun violence, and anti-vaxxers to vie for our attention.

Some of Petri’s best work in this collection focuses on gender, sexism, and #MeToo, and has a subtler, sharper edge. The reader senses that this subtlety is her tell that she’s seething, as in the devastating essay, “Some Interpersonal Verbs, Conjugated by Gender,” which quietly lays bare society’s enduring concern for a boy’s future over a girl’s psyche:

“He is drinking; he is drunk; he was drunk.
“This will ruin his life; this is going to ruin his life.
“He did something; she had something done to her; something happened.
“She is putting herself in this position; she put herself in that position.
“She should know better; she should have known better.”

In other essays on the daily indignities levied on womankind, the tone is weary rather than angry, as in, “Play the ‘Woman Card’ and Reap the Rewards,” in which Petri suggests, “Show the Woman Card to your health-care provider and you will enjoy new limits on your reproductive rights, depending on what the legislators of your state have decided is wise.” She explores this concept in more detail in “I Am a State Legislator and I Am Here to Substitute-Teach Your Biology Class.”

It’s been said that our current president has killed satire, and, certainly, ever since that infamous escalator ride into history, there have been plenty of real-life headlines that, in earlier days, could only have come from the Onion.

Still, the world was a crazy place before a reality-TV star stumbled into the role of the most powerful person on earth, and it will continue to be crazy after he is drummed back out. Which means Alexandra Petri will always have plenty of material. I’ll warrant, though, that she’s looking forward to having not quite so much.

This take-down of the Religious Right is more screed than story.