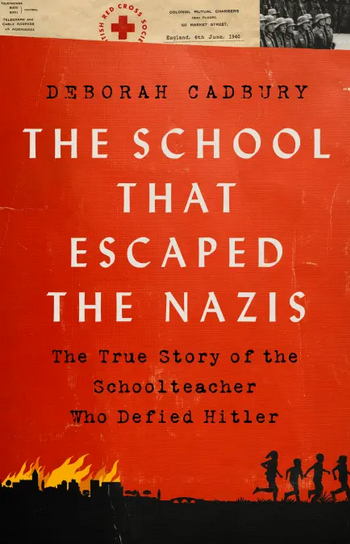 “All the violence I had experienced before felt like a bad dream. [The school] was paradise. I think most of the children felt it was paradise.”

There is no shortage of books on the Holocaust and the overall inferno of the Hitler years. Reading anything from the vast published material on this subject is bound to evoke the obvious disgust and horror. Still, the question remains: How, in the 20th century, could such carnage have unfolded in a country hitherto considered among the foremost cultured and civilized of all nations?

In The School that Escaped the Nazis, Deborah Cadbury skillfully evokes another, more heartwarming emotion surrounding those years, and her book confirms that amid the bloodshed of that era, there were indeed instances of profound goodness and human decency.

By the time Hitler came to power in 1933, Anna Essinger, a young German teacher, had already established a small progressive school in southern Germany. Yet she could see the writing on the wall; she had read Mein Kampf and abhorred its wicked ideology.

That same year, with an abundance of courage, determination, and pure defiance — and in spite of limited resources — Essinger managed to smuggle her school out of Nazi Germany to the rural county of Kent in southeast England, where it flourished and soon attracted a number of English pupils and teachers. Before long, as a result of Nazi regulations which made it impossible for Jews to remain in the German school system, there was an additional influx of expat pupils and staff.

The school swiftly earned a fine reputation and enjoyed good relations with its neighbors. The local villagers were largely friendly, supportive, and hospitable. But, in 1939, upon the outbreak of war, the school suddenly faced new challenges. Many of its German staff and older students were taken far away from Kent and interred as enemy aliens. Locals who’d previously treated the school with respect now viewed it with suspicion. Its neighbors shunned it.

The British government requisitioned the school’s strategically important premises for military purposes, and another evacuation was necessary. On short notice, Essinger found a decrepit mansion 200 miles away to use as a new facility. Simultaneously, the school was struggling to take in as many additional Jewish children from Germany as it could. It also admitted countless others whose parents the Nazis had sent to concentration camps.

The author recounts the testimony of many of these students, who described how they left their homes only to struggle with a new culture and language, as well as with the heartache of not knowing whether they’d see their families again. Essinger and her colleagues had to deal both with the academic wellbeing of pupils and with the immense trauma they were suffering.

Essinger and her staff created a loving home for approximately 900 youngsters between 1933 and 1948, when the school finally closed. It became a safe haven where they could live peacefully and without fear of being bullied or treated as outcasts. Essinger’s students formed lifelong bonds, and a great many succeeded as adults in their chosen fields.

To describe reading about this time in history as a joyful experience sounds oxymoronic. Yet Deborah Cadbury has delivered an uplifting, inspiring story. While many books on the Holocaust focus on the staggering statistics to such a degree that readers become almost numb to the savagery, she instead brings this enormously tragic period down to eye level and allows us to learn about individual children, some as young as 8. Yes, they were traumatized, but most ultimately thrived.

The School that Escaped the Nazis is a worthy addition to the Holocaust canon. And while Anna Essinger’s school was officially devoid of any religious curriculum or practice, the author makes clear that its headmistress, through her heroic efforts, nonetheless “fulfilled in her own way, the old Hebrew saying, ‘Tikkun Ha-olam’ — ‘mend the world.’”

Stephen Maitland-Lewis is an award-winning author of Botticelli’s Bastard and Mr. Simpson and Other Short Stories, a former international investment banker, and a lawyer who divides his time between Beverly Hills and New Orleans.