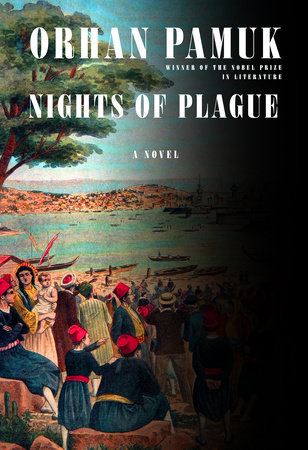 When I saw a new novel by Orhan Pamuk was coming out, I thought it would be a good time to finally acquaint myself with a Nobel Prize-winning writer I know astonishingly little about. Imagine my chagrin when I discovered Nights of Plague was 700 pages long, most of it exposition. Assuming I was in for a slog, I prepared to do some thorough (if speedy) reading.

Yet Pamuk’s prose took me by surprise with its intimate, confidential tone. The story is told as a history of the fictional island Mingheria, an outpost of the Ottoman Empire that grapples with an outbreak of deadly plague in 1901. The narrative is “sourced” from the equally fictional Princess Pakize, niece of Sultan Abdul Hamid. She and her husband, Doctor Nuri, on their way to China, are diverted to Mingheria to help when disease breaks out there. The princess often writes letters to her sister describing her experiences.

From the beginning, the island’s inhabitants react to the sickness in wildly varying ways, calling to mind a more recent plague that also provoked a variety of reactions.

“I know that we are standing on the verge of a tremendous catastrophe…But because I cannot quite picture it, I keep telling myself I must be mistaken, and then, my dear friend, I find I cannot bring myself to think about it any longer,” a pharmacist tells a doctor near the beginning of the disaster, his words sadly echoing many of the concerns we’ve confronted during the covid-19 pandemic. At the start of the outbreak, in another grim parallel to today, most people inhabitants treat the disease as incidental to their lives:

“It was eerie to see how relaxed these Mingherians were, lounging in coffeehouses and diners and sitting in their barbers’ chairs, laughing at one another’s jokes and making plans for their next business venture or to go fishing together.”

Once the plague takes hold of Mingheria in earnest, the citizens and their government struggle to come to terms with the “tremendous catastrophe.” Both Greeks and Turks live on the island, setting up ethnic as well as religious strife (the Greeks being Christian, and the Turks Muslim). After much tumult, the islanders declare their independence from the Ottoman Empire, setting up further complications.

Without aid from another nation — in fact, a blockade has been erected by other countries to prevent the plague escaping the island — the Mingherians must battle the sickness alone. Princess Pakize, confined to her guesthouse up until this point, is named queen of the island, while her former bodyguard, Major Kâmil (a Mingherian), becomes president. Pakize’s husband, Doctor Nuri, continues to be a calming presence, attempting to defuse the conflicts among competing factions and bring death rates down.

In these heady first days of the Mingherian republic, there is jubilation and a feeling of triumph, almost as though everyone believes a mere change in government will counteract the pathogen. Over time, however, the citizens realize that only stringent quarantine measures and a return to disinfecting the dead with lime can curtail the spread of the contagion, and they acquiesce — some willingly, others under duress.

Eventually, the formation of the new republic brings with it additional difficulties for all involved. Major Kâmil must deal with a personal tragedy; the princess grapples with what it means to be the figurehead of an unrecognized country; and Doctor Nuri desperately tries to calm the warring groups. (Privately, and somewhat irritably, Princess Pakize observes that her husband’s only allegiance seems to be to the idea of reconciliation.)

How do these narrative threads untangle and resolve within the overarching story? You’ll have to read Nights of Plague to find out. But don’t worry — despite its daunting length, this masterpiece is well worth your time.