Nothing to See Here: A Novel

Flammable twins melt the heart of an icy young woman in this charming, offbeat tale. 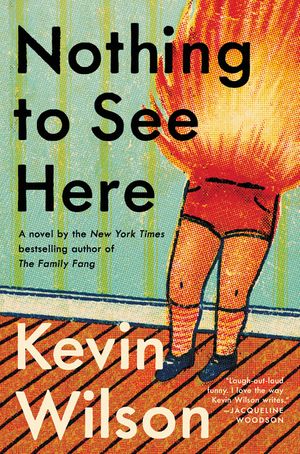 In Nothing to See Here, Kevin Wilson has written the unlikely love story of Lillian Breaker, a young woman living in her mother’s attic who aggressively doesn’t care about people. But she is drawn by a letter from Madison Billings Roberts (the one person she admits to herself that she loves) inviting Lillian to come to her estate in Tennessee for an interesting job opportunity. Madison includes a $50 bill for bus fare.

During the interview, before the job offer, as they reminisce about their brief time as roommates and bed buddies in an exclusive girls’ boarding school, Lillian’s pulse races as she suspects the job may be to be Madison’s secret lover while her husband, Senator Jasper Roberts, is off in Washington doing his thing.

Instead, the position is to become governess for Madison’s stepchildren, Bessie and Roland, twins who catch fire when agitated. (They live in a specially renovated and fire-proofed cottage on the grounds.) Lillian’s task will be to care for the children — “just for the summer” — until Madison and Senator Roberts can figure out how to solve their problem permanently.

Through the summer, Lillian learns to love and be loved by the fire twins, and Madison and Jasper win the next step in the senator’s ambitions to become President Roberts. Madison soon goes to Washington to join Jasper — who has been nominated for secretary of state — and conduct the meet-and-greets, direct the vetting, and show off their non-flammable child, Timothy.

During the tranquil interlude, with most of the estate staff in standby mode, Lillian and the twins walk through the mansion the children were born to before being stashed away with their biological mother as toddlers. Lillian thinks, “It was peaceful, honestly, like the end of the world had happened and we’d missed it.”

Roland has his memory jostled by the absence of a toy box in what was once their bedroom, but which now is Madison’s exercise room:

"[It was] right under the window…so where is it?” Roland asked.
“I guess we can ask Madison,” I said. “Do you want that stuff?”
“No,” Bessie admitted. “I just want to know if he kept it.”

Later in the interlude, Carl, the senator’s advance man, the one who “handles” things, suddenly shows up at the door and confronts Lillian:

“We need to take the kids to the doctor,” he said, and I knew that he had practiced how he would say this and had decided that a direct statement, like it wasn’t up for debate, was the best way to proceed. I imagined him saying it to his reflection in the mirror.
“Why?” I asked.
And like he had prepared for this outcome, like he just fucking knew this was coming, he rolled his eyes. “Lillian? Why do you think the kids might need to see a doctor?”
“Because they catch on fire?” I offered.
“Yes, because they catch on fire,” he replied.

Lillian guesses that Madison has decided her stepchildren are to be spirited away to another remote, probably foreign, hideaway. The best Lillian can hope for is that the twins will be well cared for.

So, was this how her humid summer of learning to like people, of practicing the parental love she’d never had, of fiercely and urgently loving and being loved was to end: by having those she’d come to cherish snatched away from her?

BUT THEN: The twins and Lillian see on TV the “normal” Timothy ignite at the senator’s swearing-in ceremony as secretary of state, with Madison wrestling him to the ground to smother the flames. To celebrate not being alone in the world, the twins leave the cottage and happily burn their clothes off.

Roland asks if Timothy will come live with them now. Lillian says she doesn’t know.

“‘Maybe.’ What would it matter? Another child in bed, another set of lungs taking in air, holding it, and releasing it. I wondered.”

Nothing to See Here looks for love in all the right places. And Lillian Breaker finds it in the unloved fire twins, even if she risks having them snatched away from her when their parents come home.

Wayland Stallard was born again in 1966 at the age of 23 somewhere in and around Washington, DC, in the likeness of a fortunate flatlander, whereafter he imagined three careers: patent examiner, gardener, and storyteller. He imagined stories that made their way into Virginia Country, the Northern Virginia Review, and the Minnesota Review, and won some mentions in fancy contests.