A People’s History of Heaven: A Novel

A group of friends use girl power to save their Bangalore slum from destruction. 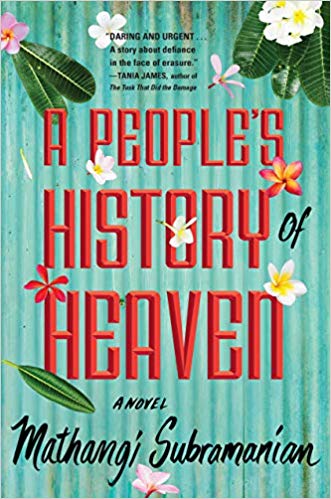 Bulldozers have come to flatten the Bangalore shanty town of Swargahalli, popularly known as Swarga, which, in Sanskrit, means Heaven. To outsiders, the name is ironic, as Swarga is closer to hell: a festering ghetto of ne’er-do-wells, Untouchables, rough peasant migrants, and women whose husbands have abandoned them.

But to the tight-knit group of friends in Mathangi Subramanian’s A People’s History of Heaven, Swarga is aptly named, for it is there among each other’s company that they are safest and happiest.

The five, “born the same year in the same slum,” represent India in all its glorious diversity. Gentle, bright Deepa is blind but lucky enough to have a mother who will fight for her and a father who has stuck around. Artistic Banu and her grandmother eke out a living creating kolam, decorative designs made of colored rice flour, for rich people; she later engages in some Banksy-style protest graffiti.

Intelligent, studious Padma has a father, but it turns out he is not everything he makes himself out to be. Opinionated Rukshana is Muslim and queer. And brash, fiercely loyal Joy is Christian, a Dalit, and transgender.

Narrated by the collective “we” of the five, the novel unfolds over the Holi weekend as the girls join their mothers to link arms in “a human chain, hijabs and dupattas snapping in the metallic wind, saris shimmering in the afternoon sun,” in an attempt to block the razing of Heaven.

Against this backdrop of the protest, we learn each girl’s history, the particular challenge that she must overcome, and that moment when she first asserts her independence, starting with Deepa’s expulsion from preschool when her teachers realize she is blind. Her mother, who underwent sterilization in exchange for a hospital birth for Deepa, will not send her away to a government boarding school, but keeps Deepa at home, under her care.

When the girls are 11, Deepa is invited to their school for Annual Day, when the school’s patron comes to observe a dance competition and treats everyone to a free lunch. Deepa is meant only to attend, but with the collaboration of her friends, she participates in the dance.

When the CD player malfunctions, the girls are left without musical accompaniment, but Deepa continues to move to the sounds and rhythms of the street:

“She just keeps singing and keeps dancing. To the moo of the cow sorting through the garbage piled along the school’s compound walls. To the yelps of the dogs pestering the cow. To the cry of a baby passing by the gate. To the bronze ring of temple bells, the silvery echo of the mosque’s azaan. To the shuffling of the audience who have never seen a blind girl dance.”

Even though they don’t win the competition, Deepa and her friends still triumph. “It’s funny, being a girl. That thing that’s supposed to push you down, defeat you, shove you back, back, and farther back still? Turn it the right way, and it’ll push you forward instead.”

And so it goes for each girl, forced to face a challenge which she overcomes with grace and agile intelligence. Circumstances conspire hard against all of them. They live in poverty, some struggle even to fill their bellies. Their home is regularly targeted for destruction to make way for shopping malls, call centers, parking lots, and factories in one of India’s fastest-growing cities.

Yet, through sheer willpower, and with the devotion and help of their friends, they triumph over adversity again and again.

Subramanian’s observations are sharp, witty, and incisive; her writing is consistently gorgeous. She is passionate about the plight of Indian girls subjected to a patriarchal system that ruthlessly oppresses and devalues them. Men are largely absent, with a reputation for being drunken, profligate spouse-abusers who will drop a wife without a second thought if she cannot produce a male heir. Those who do stay have dark secrets and no names, identified only as Padma’s father or Neelama Aunty’s husband.

In depicting the societal ills that oppress India’s women, Subramanian refuses to acquiesce to the plot that fate seems to have written for these girls. With the assistance of each other, their mothers, and a particularly dedicated headmistress — and in ways that stretch credulity — each girl overcomes seemingly intractable obstacles to face another day.

It is this relentlessly upbeat, Panglossian best-of-all-worlds optimism that, along with a writing style that relies heavily on declarative sentence fragments and rhetorical questions, nudges A People’s History of Heaven into YA territory. However, for a reading public that recently voted a feel-good middle-grade classic as the Great American Read, that distinction might not matter.

Alice Stephens writes a column for the Independent, Alice in Wordland, and is the author of Famous Adopted People.

By Terry Pratchett and Stephen Baxter