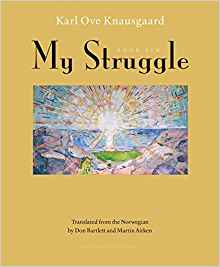 Slowly. That’s how to read Karl Ove Knausgaard’s 1,160-page doorstopper Book Six of his monumental hybrid series, My Struggle. The argument since Book One was published in English in 2012 has been whether or not the books are fiction or nonfiction. Are they novels or memoirs? Biography or autobiography?

By its end, Book Six offers a seemingly definitive answer.

Knausgaard refers to the six volumes as “autobiographical novels.” Certainly that is what it seems from Book One’s 448 pages, which expound on his parents splitting up and the death and burial of a father he despises — for good reasons. The 608 pages of Book Two focus on a summer holiday with Knausgaard’s second wife and their three children.

With Book Three (464 pages), attention is given to childhood memories. Books Four and Five get longer (512 and 656 pages, respectively), develop the ongoing themes of death, life, domesticity, writing, feelings of inadequacy, art, music, and ambition more fully, and move naturally into the massive Book Six.

In the lengthy process, Knausgaard constantly makes the personal universal. And that’s what makes the volumes worth a reader’s full-time commitment.

For fans addicted to the first five books, Book Six is a welcome return to the microscopic observations and internal ramblings of a gargantuan mind. For readers coming to the series for the first time, it’s an encyclopedic introduction to everything that went before.

Book Six is divided into two parts and three sections, each reflecting on previous events and expanding on ideas introduced in the earlier volumes.

The first section of the first part is a retrospective expository narrative. It returns to September 2009, on the eve of the publication of Book One. Living in Malmo, Sweden, Knausgaard, 41, is dealing with the fallout of using people from his life in the book. He has written all of them, asking if they object to how he has presented them. He agrees to remove them or use imagined names if necessary.

Many — including his first wife and his current wife — do not disapprove of his recollections. But one, Gunnar, an uncle on his father’s side, does. Vehemently. To the point of contacting the publisher and threatening legal action.

Gunnar claims the book is full of “fictitious and untruthful stories” about Knausgaard’s father’s brothers and demands they be “completely removed.” The contentious relationship between Knausgaard and Gunnar takes up the bulk of the first 400 pages of Book Six.

This part also deals with the daily domestic activities of marriage and parenting three preschoolers. With his second wife, Linda, away for three days, Knausgaard describes in vivid detail the quotidian and often mundane demands of waking up at 5 a.m., preparing muesli with yogurt, taking the children to school, giving bedtime baths, and trying to fit writing into his day.

There is an overwhelming, often cumbersome accretion of details which sometimes threatens to sink the narrative. When Knausgaard vacuums, for instance, he doesn’t just take out the machine and clean, he “get[s] the vacuum cleaner from behind the door, pull[s] out the cord, plug[s] it into the socket and switch[es] it on.”

But the bag was full, so there was practically no suction at all, I had to put the nozzle on top of everything that was heavier than dust and hair for it to be sucked up. Beads, crumbs, scraps of paper, the odd fruit pastille, little unidentifiable bits of whatever.

“…reached under the sofa with the head of the cleaner, sweeping it back and forth a couple of times, then moved to underneath the table…sucked up the dust that accumulated around the door sills and behind the doors before switching it off, pulling the plug out and finally, the highlight of any vacuuming session, pushing the button that made the cord come swishing back at high speed into the belly of the device.”

These details seem tedious until the reader recognizes that they are the narrative. Knausgaard vacuums up the details of his life, uncovering “fossils of emotions” throughout all six volumes in order to gaze closely at every element of his life.

Some of these detailed observations serve as social commentary about class and culture. Sofas send out signals. Brands can indicate status. This is true of “electric kettles and toasters, running shoes and school bags.”

This “knowledge was not written down anywhere” but is “an assurance of the way things stood, and it fluctuated according to the social strata in such a way that someone from the upper classes would be able to frown on [Knausgaard’s] sofa preferences.”

Knausgaard carries this method of “fastening one’s gaze,” a phrase culled from the priest’s comments at his father’s funeral, into the second section of part one, the most difficult segment of the book to sort out. It deals with the work from which Knausgaard’s series borrows its title, Adolf Hitler’s Mein Kampf (Min Kamp in Norwegian).

This lengthy tract in a section called “The Name and the Number” seems to be superfluous to Knausgaard’s struggles. But the deconstruction of Hitler’s volume serves as a reflection on My Struggle by delineating Knausgaard’s understanding of Nazism and the Holocaust.

He sees Mein Kampf as an examination of “pre-war Vienna, Weimar between the wars, how times and psychology, art and politics are closely linked, and the formula for all things human, I-you-we-they-it.” He disassembles Hitler’s story as a bildungsroman, as his own six volumes follow a similar path toward being a Künstlerroman.

As a developing writer, Knausgaard’s critical and philosophical analyses of literature extends to Shakespeare (primarily Hamlet), Proust (Remembrance of Things Past), Joyce (Ulysses), Knut Hamsun (Hunger), Cervantes, Borges, Handke, Mann, Kafka, and others. He devotes a protracted discussion to the Bible, especially the seminal story of Cain and Abel.

He provides extensive exegesis of poems by Homer (The Odyssey), Paul Celan, and Rainer Rilke, tying Celan’s “Death Fugue” to Hitler. He believes “literature’s job is not to be exhaustive but to construct the inexhaustible.”

Knausgaard’s pact with the reader is to provide a “place where that which cannot be thought elsewhere can be thought and where the reality we find ourselves in…can be manifest in images.” Art is “what cannot be done again.”

When Linda returns in part two of Book Six, the story circles back to its core of being about family — family as is, family as was. Knausgaard claims everything that has been a “story about him, Kai Age Knausgaard is the story about me, Karl Ove Knausgaard. I have told it. I have exaggerated, I have embellished, I have omitted, and there is a lot I haven’t understood. But it isn’t him I have described; it is my image of him.”

This returns the reader to the literary conundrum of the entire cycle of books. It is not a novel (it’s plotless). It is a novel (it has an arc). It is novel. My Struggle is a magnificent hybrid. It is literature unto itself — sui generis. A unique accomplishment that demands to be read. It is not a light read and yet it is not difficult to read.

If you only have the time to commit to one book in the series, start with Book Six. But the guarantee is that you will be hooked and start over with Book One.

Robert Allen Papinchak, a former university English professor, has reviewed a range of fiction in newspapers, magazines, and journals, including the New York Times Book Review, the Washington Post, the Chicago Tribune, the Los Angeles Review of Books, the Seattle Times, USA Today, People, the Writer, Publishers Weekly, Kirkus Reviews, the National Book Review, the New York Journal of Books, World Literature Today, the Strand Magazine, Mystery Scene, and others. He has been a judge for Publishers Weekly’s BookLife Creative Writing Contest and the Nelson Algren Literary Prize for the Short Story. His own fiction has been nominated for the Pushcart Prize and received a Story award. He is the author of Sherwood Anderson: A Study of the Short Fiction.