A carefully crafted novel-in-stories with something to appreciate on every page. 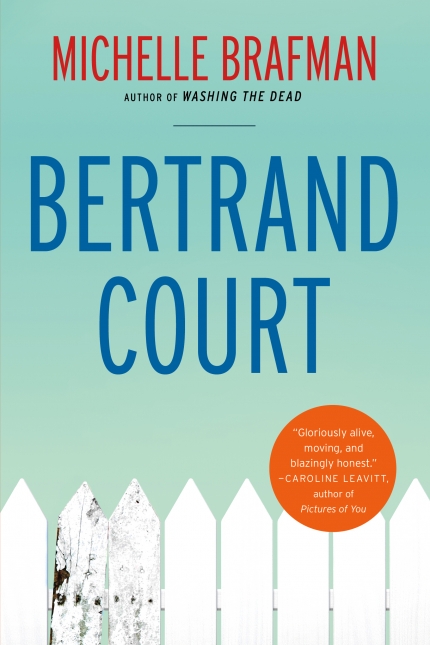 Michelle Brafman has a talent for the sad side of the human condition. In this collection of stories about a DC neighborhood, she susses out a mother’s ambivalence about her pregnancy; a deeply-buried sense of inferiority that causes a woman to settle for less again and again; a husband struggling to trust his young wife; and a mother’s secret pride in her daughter’s bossiness. Brafman’s characters struggle, and their complicated inner lives draw us in.

One of the gems in this collection is the story “Georgia and Phil.” Georgia, a talented professional producer, has made a number of compromises in her life. She has settled for a well-paid job on a reality-TV series that leaves her feeling greasy, and for a casual sexual relationship with a younger man. Phil arrives at her place twice weekly and runs his laundry through her machines while they have sub-par sex.

Brafman is masterful at giving Phil a fully realized personality: Handsome, a passionate photographer, he throws pistachios on the floor for Georgia to clean up later. Georgia’s better self shows up in flashes of outrage at her situation. Even so, a few meager signs of tenderness and an invitation to dinner are all it takes to begin to convince herself that she might be in love. The downward slide of her standards is arrested when she hears Phil’s friend refer to her as “that woman who does your laundry.” In a single, startling (and humorous) move, Georgia manages to avenge herself and salvage the only worthwhile thing from the relationship.

In a moving series of stories, “The #42,” “Ripe,” and “January,” each tale flows gracefully to the next. In “The #42,” the very pregnant Amy is restive over the way her relationship has hindered her independence, which parallels the way pregnancy has co-opted her body. “Maybe just for an hour, she can remove this baby from her womb, find a safe place where nothing will happen to it. And then, swear to God, she’ll put it right back.”

In “Ripe,” after a chance encounter with an ex-boyfriend in her old neighborhood, Amy returns to visit him in his apartment, not for sex, but for something surprisingly pure. After, the ex-boyfriend observes that, “If I listen hard, I can hear a siren off in the distance. I wonder if Amy hears it too.” This leads into “January,” where a husband’s pride and pleasure in his beautiful wife are entangled with an unwelcome possessiveness.

Several of Brafman’s characters struggle with the grief of childlessness. In this world, it’s an unquestioned tragedy, spurring a raw and primal kind of grief. No other response is possible. The thought that one might live for one’s self seems ludicrous. Words that we’ve tried to leave behind, like “barren” and “spinster,” occur with a startling regularity.

Actions that might be funny in other contexts show how the characters are deranged by their sadness (a character named Hannah carries a Ziploc with a bit of jam and a few capers in it to memorialize each of her miscarriages). Grief is an unwieldy thing to capture on the page, but Brafman deftly conveys small moments within the larger experience and even gives us a glimpse of the vastness of grieving.

While reading, I occasionally got the sense that the world in these stories is a little darker than the real one, a little more bereft. It’s possible that Brafman’s attraction to complex emotions leads her to overlook the simpler ones.

There are tiny comforts offered up by each day — think of cradling a mug of hot chocolate or watching a toddler play — that don’t make an appearance in her imagined world. Aren’t such comforts a necessary part of capturing the human experience in all its complexity?

Overall, Brafman trusts her readers to follow her into complicated emotional terrain. Once or twice, she could have taken that trust further. In “Molly,” a woman longs for the sense of belonging that her Jewish friend possesses. Brafman tells us that “anything else she’d ever wanted in life — clothes, vacations, sometimes even friends — she’d simply bought for herself,” but the story had already made that evident.

In “Two Truths and a Lie,” four women engage in a game where they tell two true things and one lie, and the others are meant to identify the lie. But this is not a game adults would play — it’s the kind of game one plays in junior high, before you have any real history, before life has kicked you in the teeth a few times, before you learn that not everyone is worthy of your trust. Brafman could have trusted us to understand that conversations can quickly become emotionally charged without the false construct of the game.

Fortunately for us, though, Brafman has taken the leap of trusting us with this carefully crafted set of stories. There is something to appreciate on nearly every page.