Four sisters, with little but each other, fight to overcome limited opportunities in the face of the Great Depression. 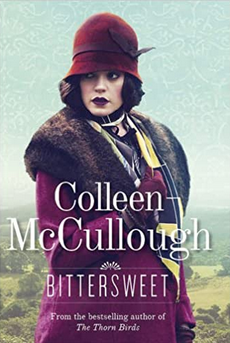 “Nothing is so sweet that there is no tinge of bitter in it.” So concludes Bittersweet, Colleen McCullough’s tale of four sisters who take one of the few professional avenues open to them in the early 20th century: nursing. They all embark on the career for their own reasons, but the one constant is their love for each other, and this drives the storytelling. However, even the sweetness of their love for each other cannot outweigh the bitterness of the compromises life forces them to make.

The Aussie McCullough is perhaps best known for her novel (and subsequent television miniseries) The Thorn Birds, a saga of forbidden love between a woman and a priest. The book proved so popular, it was listed by the British public at No. 64 in the BBC’s Big Read. McCullough herself was interested in medical school but developed an allergy to the surgical soap. Instead, she studied neuroscience in Sydney and eventually at Yale. The success of her novels allowed her to give up medicine and write full time.

With the same biological father but two mothers, the four Australian sisters in Bittersweet are comprised of two sets of twins. Edda and Grace are 20 months older than Tufts and Kitty. The four Latimer girls have their own dreams: Edda, to be a doctor; Grace, to marry; Tufts, to have a stimulating career; and Kitty, to escape the burden of being a renowned beauty.

They enroll in a new program to become registered nurses at the local hospital in New South Wales, but hit roadblocks and detours that transform their goals and their relationships. The novel also explores the politics of the time and the growing realization that the Great Depression is real and disastrous.

The first to leave school is Grace. She meets a traveling salesman and feels an immediate connection; they soon marry. But Bear, Grace’s husband, does not survive the Depression, and Grace must become her own person and the mother her children need.

A few years after Grace, Kitty leaves school to marry Charles Burton, a rich heir and an Englishman. He takes over the hospital and makes some welcome changes. Unfortunately, the traits that enable him to force through these improvements — assertiveness, a domineering attitude, the belief that he is never wrong — are the same ones that may destroy the marriage.

Tufts makes it through nursing school to rise to success in the hospital administration, but must fight for her relationship with a colleague with a history of scandal. (Their relationship was a highlight of the novel for this reader.)

The final sister, Edda, spent her life wishing she could go to medical school. That goal is finally fulfilled through a mutually beneficial, if not romantically inclined, marriage, but will it be accepted by society and, most important, by her sisters?

I found McCullough’s use of twins and closely connected sisters to be an identifiable and compelling storytelling device. As Edda explains, “As you get to know the Latimer sisters better, you’ll find that for two sets of identical twins, the similarities in each set are perfectly delineated in the one yet warped in the other, as in a sideshow hall of mirrors.” It creates tension between the sisters because they are so different, and it also allows the author to exploit those differences for her own plot advancement.

There are several jarring and blunt moments in the novel that made me want to throw my hands in the air. When characters meet, they tend to make abrupt (and vocal) snap judgments about one other. When Kitty meets her future husband for the first time in a professional setting, for example, he immediately proposes marriage: “There is only one position I’d offer you — that of my wife…I adore you. I am your slave, your prisoner of love.” That instant familiarity happens repeatedly and feels artificial.

Men are given short shrift throughout the novel. They are largely one-dimensional — needy or banal. They are the outsiders. The focus of the story is always on the sisters, to the detriment of the well-rounded male characters. One example of this is the girls’ father, who provides a sounding board and a rational heart. He is a joyful character, and I loved every time we meet up with him; alas, it was never enough.

Still, despite its flaws, McCullough’s Bittersweet — although not her best work — is a compelling story for those of us who love our sisters and love to root for the underdog.